The Week 15 NFL main slate kicks off on Sunday, Dec. 15, at 1 p.m. ET. In this piece, I highlight the quarterbacks who stand out in our large suite of analytical DFS Tools, most specifically our industry-leading FantasyLabs Models.

Odds as of Tuesday night and via PointsBet, where Action Network users can access an exclusive promotion to get a 200% deposit match (deposit $50, bet with $150). No strings attached. No rollover required.

Wilson doesn’t make it easy on investors. He’s coming off his first fantasy QB3 performance of the season, and over his past four games, he’s averaged just 14.4 FanDuel points. In not one of those games has he managed even 250 yards passing, and in each one he’s thrown an interception.

Over the past two months, he has just one fantasy QB1 performance, and that came against the horrid Buccaneers pass defense (per RotoViz NFL Stat Explorer). 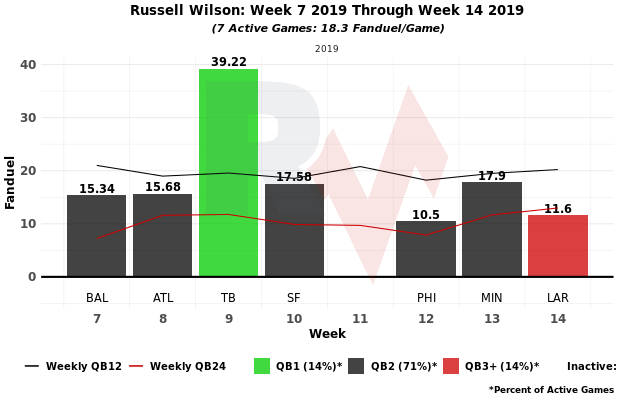 At this point, no one is arguing that Wilson should be the NFL MVP.

Additionally, the Seahawks are on the road, and in the post-Marshawn Lynch era (since 2016), Wilson has experienced a significant dropoff away from CenturyLink Field (per our FantasyLabs Trends Tool).

Plus, the Seahawks are a west coast team traveling east for an early afternoon game. They could be a little sluggish. And the Seahawks are No. 28 with a 53.6% pass play rate. It’s hard to be enthusiastic about a quarterback who doesn’t pass the ball all that much.

But for the year, Wilson is still the No. 4 fantasy quarterback with 21.8 FanDuel points per game, and he’s been a good source of value with his +4.50 Plus/Minus.

The key to Wilson’s production has been his strong efficiency. He’s No. 5 with 8.9 adjusted yards per attempt (AY/A) and 0.16 passing fantasy points over expectation per attempt (paFPOEPA, per RotoViz Screener).

And underlying Wilson’s efficiency is a high volume of high-value opportunities. He’s No. 1 with 50 end-zone attempts and 32 completions of 20-plus yards. When Wilson throws, he goes deep and looks to score. As a result, Wilson is No. 4 with his 0.57 FanDuel points per dropback (per Pro Football Focus).

And although Wilson isn’t quite the runner he used to be, he’s still chipping in on the ground. He’s No. 5 at the position with 4.8 carries per game and No. 4 with 0.9 red-zone carries per game (per Player Profiler).

At a glance, Wilson’s matchup isn’t great. The Panthers are No. 8 in pass defense DVOA (per Football Outsiders), and they have allowed a middling 16.2 FanDuel points per game to the quarterback position.

But last week they yielded 21.3 FanDuel points to Matt Ryan, and over the past 10 weeks, they have allowed all non-Dwayne Haskins quarterbacks to pass for 306 yards per game. In that span, opposing quarterbacks have had four games of 20-plus FanDuel points.

No. 1 wide receiver Tyler Lockett plays in the slot and is likely to escape the shadow coverage of cornerback James Bradberry, and that makes Wilson significantly more attractive for guaranteed prize pools. Team-specific production patterns can be analyzed with our FantasyLabs Correlations Tool, and Wilson and Lockett have had a 0.72 correlation in production over the past year. If Wilson has a big game, Lockett probably will too. For GPPs, use our Lineup Builder to stack Wilson with Lockett.

Priced as the No. 5 quarterback on FanDuel, Wilson is the No. 3 quarterback in our Week 15 fantasy football rankings.

He’s the unanimous No. 1 quarterback in our Pro Models for FanDuel, where he has position-high marks with his ceiling and floor projections as well as his +4.34 Projected Plus/Minus.

Considering the 49ers are 11-2 and Garoppolo flashed in his first eight starts with the franchise, he has underwhelmed this season, ranking No. 15 at the position with 18.3 DraftKings points per game.

But he’s No. 4 in the league with 25 passing touchdowns, and only Patrick Mahomes, Matt Ryan, Matthew Stafford and Jameis Winston have more than his three games with 300 yards passing and three touchdowns.

Even though the 49ers are No. 31 with a 49.9% pass play rate, Garoppolo still has five fantasy QB1 performances this year. 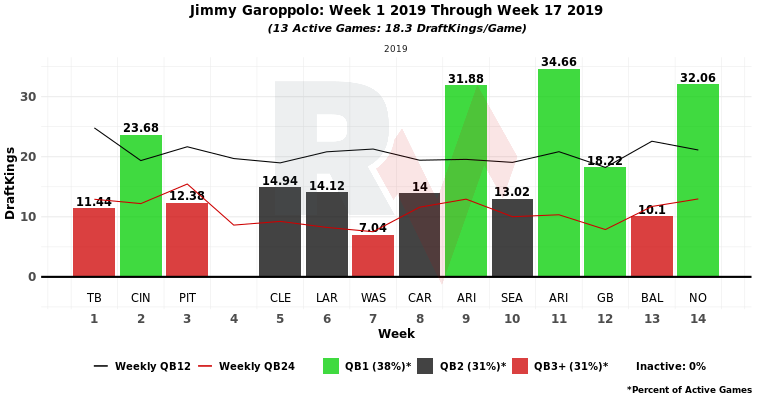 For a guy with a low floor, Garoppolo has a pretty high ceiling, and that has especially been the case since the 49ers acquired No. 1 wide receiver Emmanuel Sanders in Week 8.

With Sanders, Garoppolo has been a fantasy QB1 in 57.1% of his games.

Garoppolo has a great matchup against the Falcons, who have allowed the fifth-most DraftKings points per game to quarterbacks with 23.6. And they are now without No. 1 cornerback Desmond Trufant (arm, IR), who last week suffered a season-ending injury.

Garoppolo is the No. 1 quarterback in the SportsGeek and Freedman Models for DraftKings, where he has a position-high 98% Bargain Rating.

I have some healthy respect for the Browns’ pass defense, which has yet to allow a 300-yard passing game this season. But Murray is way too cheap. He hasn’t been as low as $5,600 on DraftKings since Week 2.

Priced as the No. 19 quarterback, Murray is No. 6 at the position with 20.3 DraftKings points per game. His salary is just out of line with the reality of his potential.

Murray has disappointed over the past two weeks with an average of 13.6 DraftKings points, 178.5 yards passing, one touchdown passing and two interceptions per game. But much of Murray’s fantasy value comes from his Konami Code rushing ability, and at the position he ranks No. 3 with 5.9 carries and 1.3 red-zone carries per game.

It would be nice if Murray were more accomplished as a passer, but because of his rushing prowess, Murray is more than viable as a fantasy producer, and that’s especially the case against the Browns. Although they have held quarterbacks to a middle-of-the-road 18.3 DraftKings points per game, they have been exploited by quarterbacks with rushing ability.

The five quarterbacks to rush for 20-plus yards against them — Marcus Mariota, Lamar Jackson, Russell Wilson, Josh Allen and Ryan Fitzpatrick — have averaged 26.0 DraftKings points per game with a +8.77 Plus/Minus and 100% Consistency Rating. They collectively have the five highest fantasy scores against the Browns, and all of them have 24-plus DraftKings points.

By contrast, only one of the non-running quarterbacks has scored more than 18 DraftKings points against the Browns.

With his running ability, Murray is averaging 34.5 yards per game. That’s an elite mark that only Lamar Jackson has surpassed this year.

Despite being a rookie, Murray has been a fantasy QB1 in seven of 13 games. 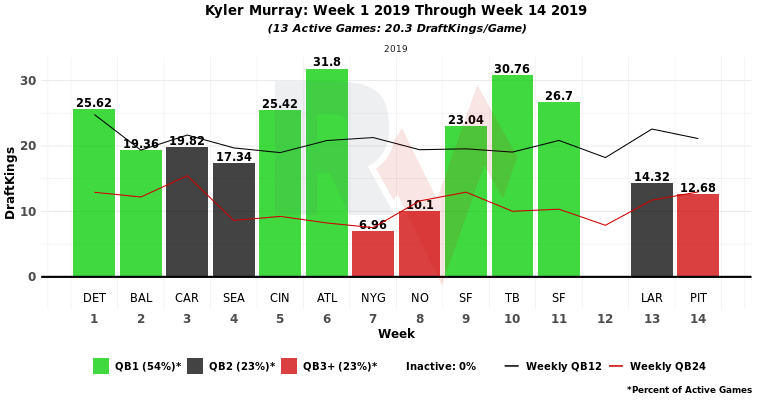 Murray is the No. 1 quarterback in the Bales, CSURAM88, Levitan, Koerner and Raybon Models for DraftKings, where he is near the top of the position with a 96% Bargain Rating and six Pro Trends.

Jameis Winston, Tampa Bay Buccaneers ($6,900 DK, $8,200 FD): After a rough first couple of starts, Winston has been the No. 2 fantasy quarterback with 25.4 DraftKings points per game since Week 3, and he leads the slate with 10.2 intended air yards per attempt (per Next Gen Stats).

He leads the position with seven Pro Trends on DraftKings, and the Titans might be without their three best perimeter cornerbacks in Malcolm Butler (wrist, IR), Adoree’ Jackson (foot) and LeShaun Sims (ankle).

Ryan Tannehill, Tennessee Titans ($6,500 DK, $7,600 FD): Since becoming the starter in Week 7, Tannehill has been the No. 3 fantasy quarterback with 22.6 FanDuel points per game, and he leads the league with a 10.2 AY/A. The Texans are No. 27 in PFF coverage grade, and Tannehill has a position-high 67% Bargain Rating on FanDuel.

Baker Mayfield, Cleveland Browns ($6,400 DK, $7,700 FD): Mayfield has disappointed this year with his 6.2 AY/A, and No. 1 wide receiver Odell Beckham Jr. (sports hernia) is reportedly playing through an injury, but the Cardinals have allowed a league-high 26.6 DraftKings points per game to quarterbacks.

Ryan Fitzpatrick, Miami Dolphins ($6,200 DK, $7,400 FD): FitzMagic has averaged 20.1 DraftKings points per game since returning to the starting lineup in Week 7, and the Giants have a funnel defense that ranks No. 12 against the run but No. 28 against the pass in DVOA.

Tom Brady, New England Patriots ($6,000 DK, $7,600 FD): Over the past two months, Brady has averaged just 15.1 DraftKings points per game, but he has six fantasy QB1 and three 300-yard, three-touchdown games this year. The Bengals are No. 30 in pass defense DVOA and without No. 1 cornerback Dre Kirkpatrick (knee, IR).

Derek Carr, Oakland Raiders ($5,600 DK, $7,300 FD): Since No. 1 wide receiver Tyrell Williams returned from injury in Week 8, Carr has four fantasy QB1 performances in seven games. Last week the Jaguars allowed a 314-yard, three-touchdown performance to Philip Rivers, and they are No. 29 in PFF coverage grade.

Gardner Minshew, Jacksonville Jaguars ($5,500 DK, $6,900 FD): Minshew had just 162 yards passing last week in his return to the starting lineup, and he seems likely to be without No. 1 wide receiver D.J. Chark (foot), but the Raiders have allowed the second-most FanDuel points to quarterbacks with 22.3 per game and are No. 31 in pass defense DVOA.

David Blough, Detroit Lions ($5,300 DK, $7,300 FD): A limited, undrafted third-string rookie, Blough has a 96% Bargain Rating on DraftKings and a great matchup against the Buccaneers, who have allowed an NFL-high 478.7 air yards and yards after the catch combined per game to opposing teams (per AirYards.com).

Eli Manning, New York Giants ($5,200 DK, $6,800 FD): In his Week 14 return to the starting lineup, Manning had a passable 203-yard, two-touchdown performance, and now he gets a matchup against the Dolphins, who are No. 32 in pass defense DVOA. Manning has a position-high +2.97 Projected Plus/Minus and a respectable six Pro Trends. Eli in cash? I feel dirty.