We are just two weeks away from the end of the regular season, and the NFL is still on pace for a record-breaking campaign with an average of 23.4 points per game per team. But scoring has dropped precipitously as injuries have mounted, game tape has accumulated, weather conditions have worsened, pace of play has slowed and divisional opponents have rematched.

Will scoring continue to decline in Week 16? Or will teams put up more points in the last “real” week of the NFL season?

The action continues with a 12-game main slate that kicks off on Sunday at 1 p.m. ET.

On the Wednesday edition of The Action Network NFL Podcast, Ertz was highlighted as one of the primary tight end candidates for cash games this week.

But he’s coming off one of his worst games of the season (3-22-0 on seven targets), and starting quarterback Carson Wentz (back) is out. As good as backup Nick Foles has been in Wentz’s absence since last season, Ertz has notable quarterback-based splits (including playoffs, discounting last season’s partial Week 17 game).

Ertz could have reduced ownership in guaranteed prize pools because of his underwhelming performance last week and his fantasy production with Foles, and that makes him an intriguing tournament play. For GPPs, use our Lineup Builder to stack Ertz with Foles. 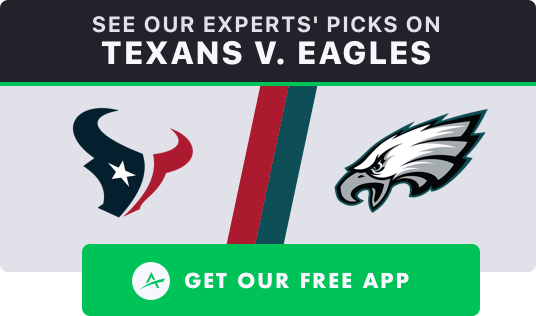 Ertz has a strong matchup against the Texans. Even though the Eagles could look to run the ball as home favorites, the Texans are 29th in pass defense against tight ends with their 25.9% mark in Football Outsiders’ DVOA, and overall they have a funnel defense that ranks second against the rush (-27.5% DVOA) but 22nd against the pass (10.6% DVOA). The Eagles should be incentivized to move the ball through the air and to keep Ertz involved.

On Sunday, I’ll probably look to bet the over on Ertz’s yardage prop. To find the best bets in the props market, use our Player Props Tool, which is powered by our industry-leading projections. Since Week 1, the props with a bet quality of 10 have gone 214-100-12, good for a 66% win rate. Without question, you should supplement your DFS action with player props.

Ertz has position-high median and ceiling projections on DraftKings, where he’s the No. 1 tight end in the Bales, CSURAM88, Levitan, Koerner, Raybon and SportsGeek Models.

For more on the slate, see this strategy-focused conversation between Bales and CSURAM88. 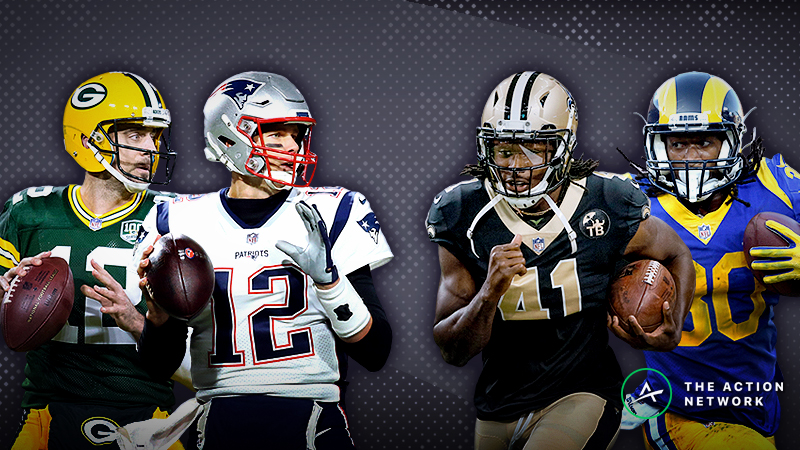 UPDATE (12/23): Wide receiver T.Y. Hilton (ankle) is a game-time decision after sitting on Wednesday and Thursday and getting in a limited practice on Friday.

Ebron is coming of a bitterly disappointing Week 15 performance in which he managed just 1.3 FanDuel points on three targets. He played just 52.8% of the snaps and ran just 21 routes as the Colts employed a run-heavy game script in their 23-0 home win over the Cowboys. With the Colts favored by 10 in Indianapolis, it’s very possible that Ebron could once again see little usage.

It’s indeed troubling that Ebron has been at his best on the road and as an underdog and at his stone-cold worst as a home favorite this season.

If Ebron doesn’t find the end zone this weekend, he could massively disappoint, because he’s been used sparsely when the Colts are favored at Lucas Oil Stadium.

Nevertheless, Ebron is a top-four fantasy tight end with 12.2 FanDuel points per game, and he’s tied for first among all non-running backs with 13 scrimmage touchdowns (12 receiving, one rushing). For the season, Ebron is a close second to wide receiver T.Y. Hilton on the Colts with 99 targets, 59 receptions, 662 yards receiving and 883 air yards. From a salary-adjusted perspective, Ebron leads all tight ends with a +5.22 FanDuel Plus/Minus.

As has been the case for the past three weeks, tight end Jack Doyle (kidney, injured reserve) is out, and in his absence Ebron has seen a dramatic increase in his per-game usage. 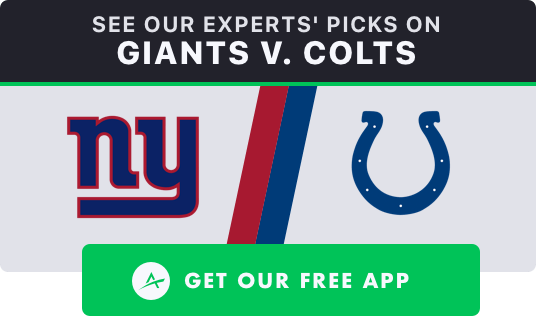 While Ebron’s touchdown-driven production might be a little fluky, his high-leverage usage certainly is not. Ebron is first among all players (not just tight ends) with nine touchdowns on passes into the end zone. He trails only Steelers wide receiver Antonio Brown and Texans wide receiver DeAndre Hopkins with his 16 end-zone targets. He’s second with 10 red-zone touchdowns (not counting his two-yard rushing score). And he’s top-10 with 20 red-zone targets.

On top of that, he’s being used as a downfield weapon. Among tight ends, Ebron is third with his 883 air yards, and his 9.1-yard average depth of target (aDOT) suggests that he’s more of a big-bodied slot receiver and less of a tight end. And the numbers back that up. Of all fantasy-viable tight ends, Ebron has run a league-high 62.2% of his routes from the slot. He’s also lined up out wide on 12.5% of his offensive snaps.

Ebron has a good matchup against the Giants. Although they are 10th against tight ends in pass defense (-10.0% DVOA), they are without All-Pro strong safety Landon Collins (shoulder, IR), who has been the team’s primary tight end defender for most of the season.

For most of the game, Ebron will match up against either strong safety/dime linebacker Michael Thomas or safety Sean Chandler. Collectively, they have allowed a catch rate of 77.3% in their coverage. If the Colts target Ebron regularly, he should be able to put up points.

One potential drawback of rostering Ebron is that the Colts have a 21-10 record to the under as home favorites with quarterback Andrew. Since 2012, under bettors have enjoyed a 32.7% return on investment when the Luck-led Colts have been favored in Indianapolis (per Bet Labs). Even if the Colts win, they still might not put up a lot of points: Just last week, they scored only 23 against the Cowboys, despite winning convincingly as three-point favorites at Lucas Oil Stadium.

Ebron is probably best used as a GPP-only play, but it helps that the Colts-Giants game has the slate’s fastest-paced situation-neutral matchup. And with Hilton (ankle) once again slated to be a game-time decision, it’s possible the Colts could redirect a few of his targets to Ebron rather than overwork their No. 1 wide receiver.

Ebron has position-high marks with his 99% Bargain Rating, +4.19 Projected Plus/Minus and eight Pro Trends on FanDuel, where he’s the No. 1 tight end in the Levitan, Koerner, SportsGeek and Freedman Models. 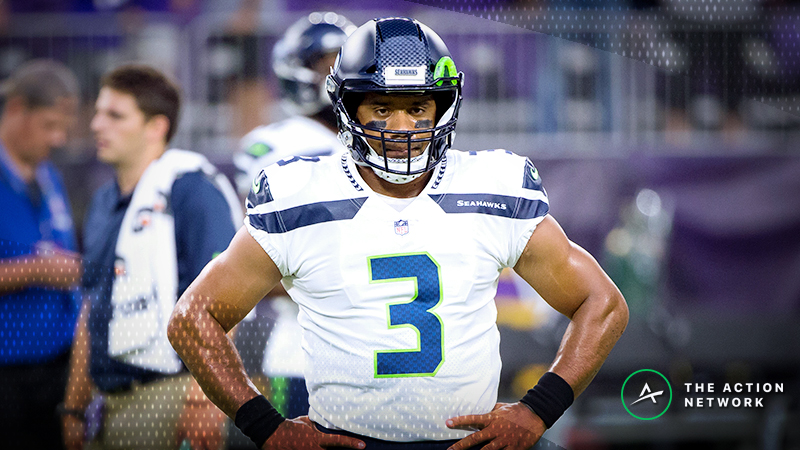 UPDATE (12/23): Wide receiver Quincy Enunwa (ankle) is out for the second straight game.

There’s a weird quirk in my DraftKings Model — it likes Herndon seemingly every week.

I don’t want to spend a lot of time justifying it, but here’s the rationale: 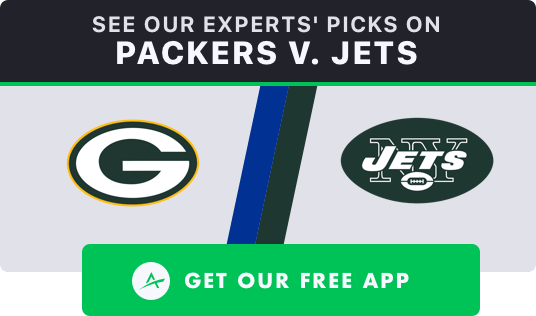 What does it matter that the Packers have held opposing tight ends to a bottom-three mark of 8.8 DraftKings points per game?

WHAT DOES IT MATTER?!

With a top-two Bargain Rating (97%) and Projected Plus/Minus (+2.55), Herndon might just provide enough value on DraftKings to make him a viable punt play.

To clarify: I won’t have Herndon in any lineup this weekend, but if you’re looking for salary relief at the position, he’s definitely someone to consider.

Be sure to read the other Week 16 positional breakdowns.