Below is an in-depth online DFS strategy conversation between Peter Jennings and Jonathan Bales about the NFL Week 16 slate.

If you want more information on how to create the best lineups, subscribe to FantasyLabs, where you can access our large suite of analytical DFS tools.

jonathan.bales [12:05 PM]
what do you think you’re gonna do with NE receivers this week

peter.jennings [12:05 PM]
[Chris] Hogan is a nice dart throw in GPP. [Julian] Edelman has the most equity for me. Thoughts on the Rbs?

jonathan.bales [12:09 PM]
fav on DK right now outside of the obv studs is [Elijah] Mcguire
I think he’s gonna be higher ownership than what Levi has…maybe not in the milly but higher than 9-12% in the $1500
if you go with even a decent stack with a stud RB – say Dak [Prescott], Zeke [Elliott], [Amari] Cooper – there isn’t a ton of salary left so you probably are going cheap at one of the 2-3 RB spots

peter.jennings [12:14 PM]
Mcguire is very talented too. I drafted him a ton in Best Ball and need him in the championship round. I like his pass catching ability. That is a great game to stack too.
Giants clearly trying to lose
[Odell] Beckham ruled out, I am slightly concerned about how they use [Saquon] Barkley in this game (he will be massive chalk at his price).

jonathan.bales [12:16 PM]
yeah same…what do you think chances are they get blown out and just pull him
I like [Nick] Chubb and [Alvin] Kamara at cheaper price there

peter.jennings [12:17 PM]
love both of those guys. I want exposure to teams with incentive.

jonathan.bales [12:17 PM]
I don’t think they are probably even aware of it but cowboys lowkey don’t have a ton to play for I believe
I mean they do but their odds of winning division barely change with loss

peter.jennings [12:17 PM]
I think Barkley has a much wider range of volume than usual given the incentive to lose for the Giants
I think the Cowboys want to get back on track after an embarrassing game

jonathan.bales [12:19 PM]
i’m actually mistaken about the cowboys…I was using this at 538

peter.jennings [12:19 PM]
Cowboys stacks are my favorite this week

jonathan.bales [12:19 PM]
I don’t trust 538’s NFL ratings but I assume their playoff probability based on all the different W/L scenarios is accurate

jonathan.bales [12:20 PM]
they have cowboys at only 81% to even make playoffs if they lose

jonathan.bales [12:21 PM]
they have Dallas at 66% to win east if they lose and PHI beats HOU
I saw some crazy splits on Dak
did you see this silva tweet?

the man coverage stat is awesome

peter.jennings [12:23 PM]
yeah, I saw that and the Bucs are awful on the road defensively vs at home.
They have been better with new D coordinator but still the splits all line up for Dallas to crush

jonathan.bales [12:24 PM]
Dak/Zeke/Cooper is obvious. Gallup is differentiator that could ruin it or win a tourney

peter.jennings [12:24 PM]
yeah, I’m higher on Gallup
I like the full blow onslaught lol
who would you run it back with?

jonathan.bales [12:24 PM]
are you running anyone back on TB
yeah, just asking…either hump or [Chris] Godwin…I slightly prefer Godwin actually but that offense is so difficult sometimes because their targets are volatile
hump is steady but never huge huge volume
that’s one of the advantages of DAL for sure…you know who is getting the ball

jonathan.bales [12:27 PM]
I think that’s underrated…the predictability of workloads…compare DAL to like IND, which is like impossible to predict
jfc
RBs with proj plus-minus of at least 3 when they are a dog…

60% consistency, 8% ownership
McGuire is that 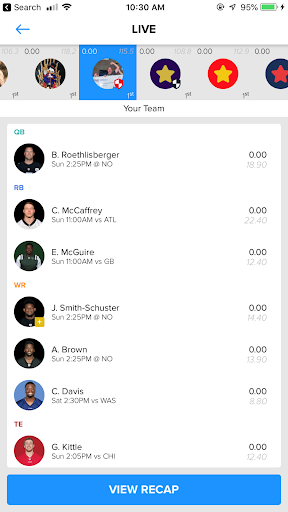 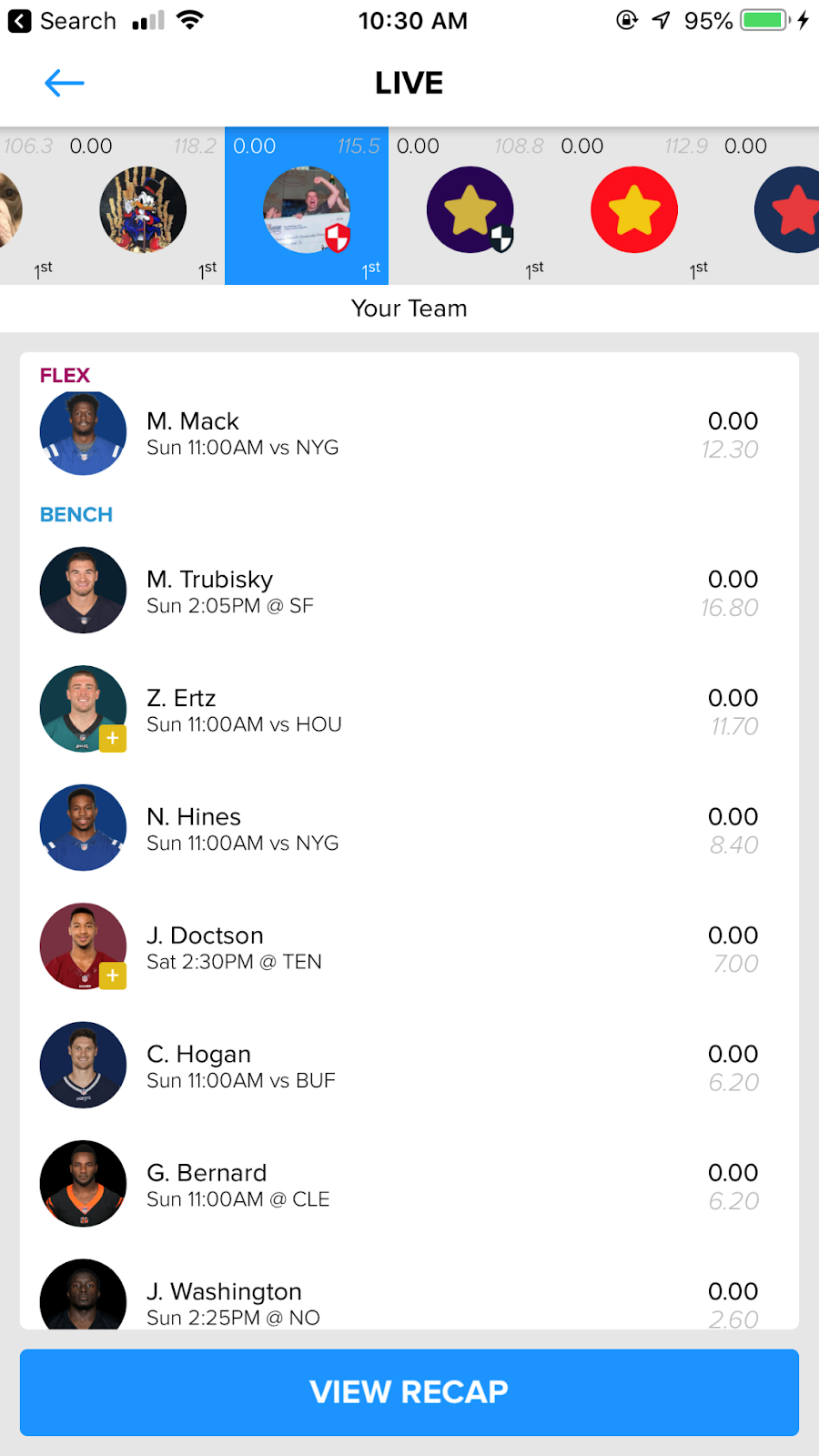 this team is real live
curious what the Panthers will do with CMC
Zeke, Kamara, CMC, Cook, Chubb, Saquon for GPP
but CMC might move down
The Panthers did give him 20 touches in a preseason game

jonathan.bales [12:34 PM]
yeah I like others ahead of him…Chubb more for sure for me
how many teams are left on draft? 60?

jonathan.bales [12:35 PM]
and how many in best ball
what are top payouts in the mega 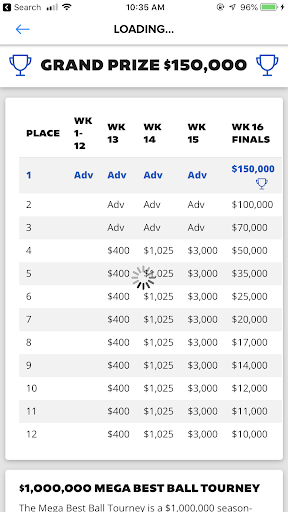 peter.jennings [12:37 PM]
These tournaments are awesome though. Great sweat. How many you going to put in the $1500?
yeah, so many injuries
I have some of the healthiest teams

peter.jennings [12:38 PM]
I also focused on correlation a lot more than other owners

jonathan.bales [12:46 PM]
but like you said they’re incentivized to just tank

peter.jennings [12:46 PM]
yeah, I think Engram will play a lot regardless

jonathan.bales [12:52 PM]
foster again? i think I saw stats a bit ago about how everyone thinks belichick takes out the opposition’s top option/receiver but they actually perform fine
could be because they’re generally down

peter.jennings [12:52 PM]
yeah, I am more concerned that Belichick will slow down Allen as a QB

jonathan.bales [12:53 PM]
top fantasy QB in the league the past month! hah

peter.jennings [12:53 PM]
his running has been amazing
rocket arm we knew about
hes such a good athlete

peter.jennings [12:56 PM]
yeah, Bills could be a sneaky team next year
they need an elite #1 WR badly

peter.jennings [12:58 PM]
Rams have been so much worse on the road. I also am concerned about the lack of offense from AZ
divisional game

My two favorites games have had amazing line movement

peter.jennings [1:02 PM]
Rams D and a RB is a great stack
love Rams D this week
even on the road

jonathan.bales [1:05 PM]
okay so combining all that, I just made your team….Dak, Zeke, Mcguire, Robby [Anderson], Hogan, Amari [Cooper], [David] Njoku, Michael Thomas, Rams D
a mil
I actually wouldn’t put Thomas in there alone probably
I think having small parts of those smash games is wrong a lot because there are so many combos of those and if your part does well, the odds the game was a shootout is much higher, in which case you’re probably getting beat anyway
I’d prefer just overstacking those and then fading totally in other lineups (usually)

peter.jennings [1:07 PM]
you like Godwin or Jackson running it back?

jonathan.bales [1:07 PM]
I think that’s one thing people don’t really get all the time…the ownership or how “contrarian” each player is really only matters in the context of the lineup
so like a 40% Zeke could be detrimental in one lineup and not at all in another

peter.jennings [1:08 PM]
totally agree, you have done a good job of explaining that over the years.

jonathan.bales [1:08 PM]
a lineup with like all 15% guys is totally different than one with avg ownership also at 15% but half chalk half true low-owned guys
same concept with overstacking a game where the combo is perhaps unique without the components needing to be
I’m wrong on TB every week. they spread the ball so much I just prefer the cheapest guys usually in those instances. but I might just not go heavy on TB in that situation
the only thing that sucks about DAL is they run so slow

peter.jennings [1:10 PM]
they have been much faster with Amari addition
Cowboys 64.4 plays per game on average this season
last three 74.4

jonathan.bales [1:12 PM]
they have looked so much better with Amari. I don’t have confidence that Garrett has changed anything though really

peter.jennings [1:14 PM]
I LOVE Mack and the Colts D too
Colts O line fully healthy again
which is massive

peter.jennings [1:16 PM]
lol yeah
Would be nice to get even on Amari this week by winning 7 figs
Have him in all the Best Ball Championships. Need those + DK 1mm winner and I might be even!

Not sure on severity of groin injury Juju sustained yesterday. This confirms James Washington is the direct backup: https://t.co/qDavVgILml

I have Washington on that Big Ben stack. HE would be big for DFS as well. Going to be a big weekend of news.