The Cowboys opened as -2.5 favorites, and the game opened at 41.5 points, but both lines have moved. As noted by P.J. Walsh, sharps hit the over early in the week, and then they invested in the Seahawks. On the Wednesday edition of The Favorites podcast, bookmaker Bob Scucci picked the Seahawks in “Scooch Roulette.”

None of this bodes particularly well for the Cowboys and Elliott.

But according to The Action Network NFL Power Rankings, the sharps might be wrong to back the Seahawks: Our numbers suggest that the Cowboys should be favored and will be undervalued if/when the line moves any lower.

On top of that, Zeke has the highest median, ceiling and floor projections in our Models. As CSURAM88, Koerner and Ian Hartitz detailed on the Wednesday edition of The Action Network NFL Podcast, Elliott is a strong play in cash games. In guaranteed prize pools, Zeke has been one of the most rostered players this year, and we expect him to have the highest ownership rate of wildcard weekend.

I will probably die believing that the Cowboys shouldn’t have drafted Elliott No. 4 overall in the 2016 draft, but as a fantasy producer, he’s elite. Since he entered the league in 2016, only Le’Veon Bell (21.6) and Saquon Barkley (21.3) have averaged more FanDuel points per game than Zeke’s 19.3.

Of all running backs, Zeke led the position with his 97.5% snap rate, 26.6 opportunities (carries plus targets) per game and 43.7% opportunity market share (per the RotoViz Player Usage App). Zeke basically is the Cowboys offense: He’s one of just 13 NFL backs with at least 1,000 touches in his first three seasons.

Even though Zeke sat out Week 17, he led the league this season with 381 touches and was a close second to Saquon with 2,001 scrimmage yards. Not once this season has Zeke failed to get 18 touches in a game. Since his rookie campaign, Zeke is the only back to average more than 100 yards rushing per game with his mark of 101.2. In fact, Elliott is second all time with his per-game rushing average, trailing only Hall-of-Famer Jim Brown, who has 104.3.

Although Zeke has been a force for most of the season, his campaign really took off once wide receiver Amari Cooper joined the Cowboys in the Week 8 bye. Zeke has seen a significant increase in overall per-game production with Cooper.

Although he’s expensive, Zeke has provided an abundance of value since November with his +6.82 Plus/Minus.

It’s unsurprising that Zeke and the Cowboys have been better since Cooper joined the team. Without him, they were 3-4. With him, they have gone 7-2 and won the NFC East.

But we shouldn’t overstate the impact Cooper has had on the offense. Even though the Cowboys are accumulating more yards per game with him, they are by no means radically better at converting yards into points (per the RotoViz Team Splits App).

It’s not as if the Cowboys have been significantly better or even that good of a team with Cooper.

The Cowboys are 7-2 with Amari Cooper.

They’ve also been outscored 201-199 since he joined the team.

The Cowboys look like a team destined for some rude postseason regression. And I say that as a self-loathing Cowboys fan.

On paper, Zeke has a decent matchup against the Seahawks, who rank 17th against the run in Football Outsiders’ DVOA. Elliott put up 138 yards against them in a 24-13 Week 3 loss. For the season, the Seahawks have allowed a middle-of-the-road 21.9 FanDuel points per game to opposing backfields.

But the Seahawks have noticeably struggled against running backs in the second half of the season (since Week 10).

Given how backs have recently done against the Seahawks, Zeke is in a good spot.

But the Seahawks were without longtime linebacker K.J. Wright (knee) for five of their past eight games. He’s now healthy and back. Playing alongside Bobby Wagner (91.9 Pro Football Focus grade), Wright is half of the league’s most-feared off-ball linebacking duo.

And the Cowboys are having issues along their offensive line. Left guard Xavier Su’a Filo (ankle) exited the team’s meaningless Week 17 game with an injury and is officially doubtful to play after missing practice all week. Filling in for Su’a Filo will be the rookie Connor Williams, whom Su’a Filo replaced in Week 11 after the second-rounder’s early-season struggles became too much for the team to bear.

On the interior, Williams will have to face nose tackle Poona Ford, who has really emerged for the Seahawks since Week 13. Even though he’s an undrafted rookie, Ford has been incredibly strong with a 90.3 PFF run-defense grade, and in each of the past three weeks Ford has played at least 25 snaps.

Next to Williams is Joe Looney, who has earned a 53.7 PFF grade while filling in this year for All-Pro center Travis Frederick (illness, IR). Facing two subpar backups, the run-stuffing Ford could prove to be a significant hindrance to Zeke and the Cowboys rushing attack.

On the plus side, the Cowboys are in Dallas, and they have been significantly better at home this year than on the road.

And unlike half of the teams on the slate, they get to play indoors, which is massively beneficial during the winter. Over the past 15 years, domed games have a postseason over/under record of 28-9-0, good for a magnificent 49.8% return on investment (per Bet Labs). For comparison, outdoor postseason games are 53-70-4 with a -15.5% ROI.

It’s no wonder that sharp bettors quickly invested in the over.

But the Cowboys and Seahawks both play at a slow pace, and in the previous six games that head coaches Jason Garrett and Pete Carroll have met, the under has hit five times.

With quarterback Dak Prescott, the Cowboys have a 19-29 over/under record. Including the postseason, the Cowboys are 17-32-1 against the spread in the Garrett era as home favorites.

There are legitimate reasons to believe that not many points will be scored in this game and that the Cowboys will score fewer points than the Seahawks.

But even if the Cowboys find themselves in a tough game, Elliott’s increased receiving workload is likely to insulate him from a game script-based letdown. Each NFL season, Zeke has enhanced his value as a receiver on a per-game basis (per the RotoViz Screener).

With 95 targets and 77 receptions, Zeke has team-high marks in both categories. Even if Zeke struggles on the ground and the Cowboys struggle overall, his receiving abilities make it highly likely that we’ll see something approaching peak Zeke this weekend.

I’ll probably look to bet the over on Elliott’s yardage prop on Saturday. To find the best bets in the props market, use our Player Props Tool, which is powered by our industry-leading projections. Since Week 1, the props with a bet quality of 10 have gone 225-106-12, good for a 66% win rate. Without question, you should supplement your DFS action with player props.

Elliott has position-high marks with a 98% Bargain Rating and 12 Pro Trends on FanDuel, where he’s the No. 1 running back in all our Pro Models. 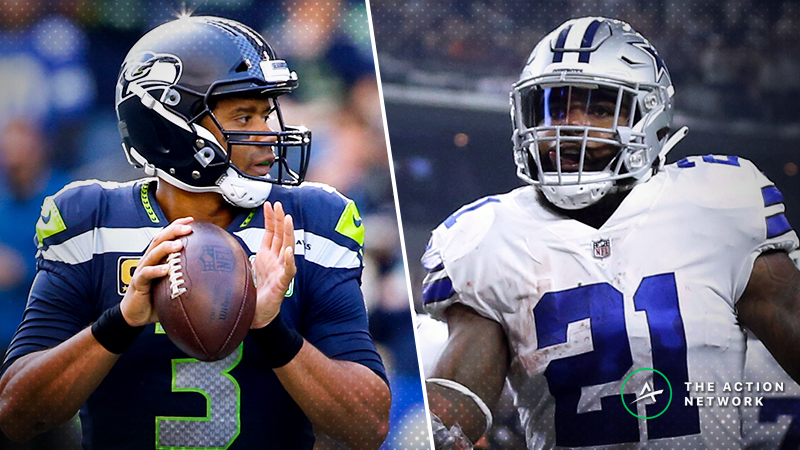 Some people might be tempted to fade Edwards because his teammate Kenneth Dixon last week had his best game of the season, turning 12 carries and one target into 119 yards. And Dixon is also the superior receiver: For his career, Dixon is averaging two receptions per game, whereas Edwards has just two receptions in his entire career.

But since quarterback Lamar Jackson took over as the starter in Week 11, the Ravens have averaged a league-high 65.7% rush rate. The team’s scheme has entirely changed with the quarterback switch.

On an almost identical number of plays per game, the Ravens are scoring more points with Jackson. A chunk of the rushing workload is going to Jackson himself, but there’s still more than enough carries to go around.

Since returning in Week 13 from a knee injury, Dixon has averaged 9.4 carries per game with a high of 12 last week. Even if Dixon were to get 12 carries again this week, there would likely still be enough opportunities available for Edwards to hit his salary-based expectations.

Although Edwards has been the team’s lead back for just seven games, it’s worth looking at his per-game splits.

Even though he’s a nonentity in the passing game, Edwards has been productive as a lead back, seeing a good number of carries per game. He’s been significantly less productive with Dixon, but a portion of that could be due to variance: He’s had almost as many opportunities with Dixon as without him.

The Chargers rank 28th with their PFF run-defense grade of 73.2, and they are without nose tackle Corey Liuget (quad, IR) and linebackers Denzel Perryman (knee, IR) and Kyzir White (knee, IR). In a Week 16 road win against the Chargers, Edwards put up 105 yards on 14 carries and one target.

The Chargers have been especially vulnerable against running backs over the past five weeks.

Even on a small slate and against a defense that has recently been friendly to running backs, Edwards isn’t likely to have a high ownership rate.

Edwards leads the positions with a 99% Bargain Rating and seven Pro Trends on DraftKings, where he’s the No. 1 back in the Bales, SportsGeek and Freedman Models. 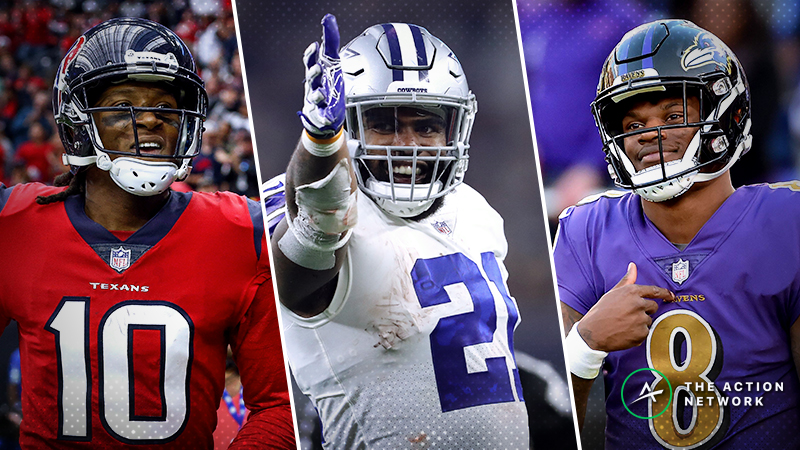