In this positional breakdown, I’m looking at one tight end at the top of the individual Pro Models that Jonathan Bales, Peter Jennings (CSURAM88), Adam Levitan, Sean Koerner, Chris Raybon, Kevin McClelland (SportsGeek) and I have constructed.

This week, one tight end stands out above the rest in our Pro Models. In the words of Helena Ravenclaw, “If you have to ask, you’ll never know.”

The Texans opened as -2.5 favorites, but the line has moved toward the Colts. On the Wednesday edition of The Favorites podcast, bookmaker Bob Scucci noted that the public and the wiseguys are both backing the Colts, which in theory bodes well for Ebron.

Additionally, professional bettors have targeted the over throughout the week, which makes sense: It’s winter, and the Texans-Colts game will be played indoors. Over the past 15 years, domed games have a postseason over/under record of 28-9-0, good for a magnificent 49.8% return on investment (per Bet Labs). For comparison, outdoor postseason games are 53-70-4 with a -15.5% ROI.

The game environment is definitely in Ebron’s favor: The Colts and Texans are both top-10 in situation-neutral pace and should combine to have the week’s fastest-paced matchup. Unsurprisingly, this game has a slate-high pass funnel rating of 76.2.

On the Wednesday edition of The Action Network NFL Podcast, we talked about Ebron as a strong play in both cash games and guaranteed prize pools. Although Eagles tight end Zach Ertz leads the position with his median and ceiling projections, Ebron’s projections aren’t far behind, and he’s significantly cheaper, offering a reasonable combination of upside and value.

Ebron can certainly be frustrating to roster. In Weeks 15-16, he turned eight targets into a 4-36-0 letdown. Even so, Ebron finished the year as the No. 5 fantasy tight end with 11.8 FanDuel points per game, and from a salary-based perspective, he offered the most value at the position with his +4.81 Plus/Minus. After scoring yet another touchdown last week, Ebron enters the playoffs trailing only wide receiver Antonio Brown among non-running backs with his 14 scrimmage touchdowns (13 receiving, one rushing), and on the Colts he trails only wide receiver T.Y. Hilton with his 110 targets, 66 receptions, 750 yards receiving and 1,020 air yards.

As has been the case since Week 13, tight end Jack Doyle (kidney, injured reserve) is out, and in his absence Ebron has seen a dramatic increase in his per-game usage (even though he exited Week 16 early with a concussion).

While Ebron’s splits and touchdown-driven production might be a little fluky, his high-leverage usage certainly is not. Ebron is first among all players (not just tight ends) with nine touchdowns on passes into the end zone. He trails only Antonio Brown and Texans wide receiver DeAndre Hopkins with his 17 end-zone targets. He’s second with 11 red-zone touchdowns (not counting his two-yard rushing score). And he’s top-10 with 21 red-zone targets.

On top of that, he’s being used as a downfield weapon. Among tight ends, Ebron is third in air yards, trailing only Chiefs tight end Travis Kelce and Ertz, and his 9.4-yard average depth of target suggests that he’s more of a big-bodied slot receiver and less of a tight end. And the numbers back that up. Of all fantasy-viable tight ends, Ebron this year ran a league-high 60.3% of his routes from the slot. He also lined up out wide on 14.2% of his offensive snaps.

Ebron has a great matchup against the Texans, who have allowed opposing tight ends a top-five mark of 12.0 FanDuel points per game. In general, they have a funnel defense: The Texans rank first against the run in Football Outsiders’ DVOA and 18th against the pass. The Colts should look to pass early and Ebron (#NailedIt).

While Hilton has historically been his best at home and as a favorite, Ebron has exhibited notable reverse splits with the Colts.

At a minimum, it’s probably doesn’t hurt Ebron that he’s a road dog.

In his two games against the Texans earlier in the year, Ebron was more than viable.

On Saturday, I might look to bet the over on Ebron’s touchdown prop. To find the best bets in the props market, use our Player Props Tool, which is powered by our industry-leading projections. Since Week 1, the props with a bet quality of 10 have gone 225-106-12, good for a 66% win rate. Without question, you should supplement your DFS action with player props.

On DraftKings, Ebron has a position-high +1.25 Projected Plus/Minus and six Pro Trends: He’s the No. 1 option in the Bales, CSURAM88, Levitan, Koerner, Raybon and SportsGeek Models.

If you want to go away from Ebron in GPPs, that’s always an option, but in cash games, he’s the guy a lot of sharp players are likely to use. 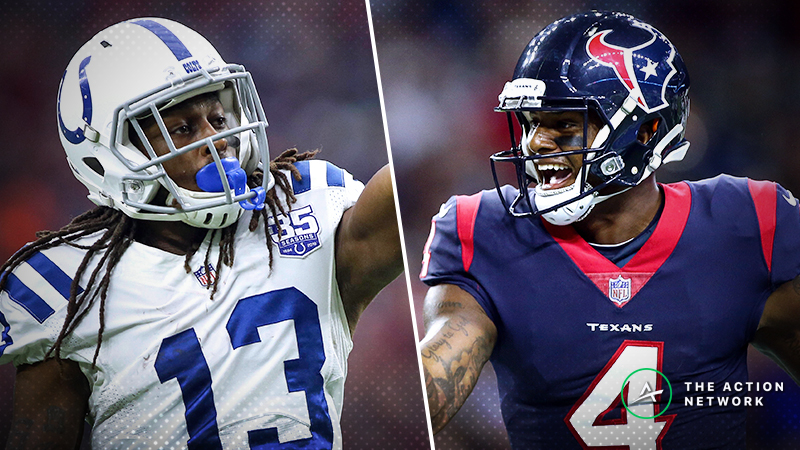