Ezekiel Elliott at No. 4, Compounding Mistakes, and 2016 NFL DFS 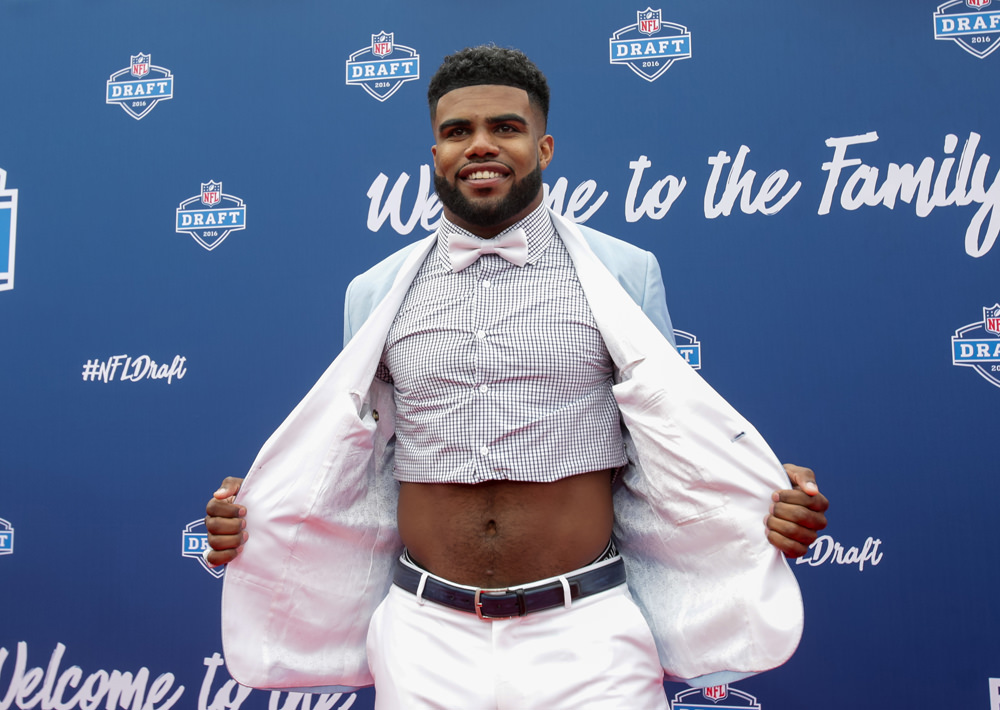 To quote Dumb and Dumber: “Just when I think that you couldn’t be any dumber, you go and do something like this” . . . and, Jerry Jones, you totally did not redeem yourself.

This is the 44th installment of The Labyrinthian, a series dedicated to exploring random fields of knowledge in order to give you unordinary theoretical, philosophical, strategic, and/or often rambling guidance on daily fantasy sports. Consult the introductory piece to the series for further explanation.

If you think that Jerry Jones doesn’t care about redemption, you’re wrong. He spent more than a decade searching for redemption after he took Greg Ellis instead of Randy Moss with the No. 8 pick of the 1998 NFL Draft — especially because A) the Cowboys needed a wide receiver and B) Moss had openly stated before the draft that he was hoping to be selected by Dallas.

It’s my belief — and I say this as someone who has unfortunately been a Cowboys fan his entire life — that the Cowboys just selected Ezekiel Elliott with the No. 4 pick in the first round of the 2016 NFL Draft because they are seeking redemption for not taking a running back in the 2015 draft when they had ample opportunity to do so and could have used one.

As a total cohort, the 2015 crop of rookie running backs was the best the NFL had seen since the 2008 class. It was an especially strong group of backfield prospects — the kind of collection that comes along maybe once per decade.

Last year’s assemblage of young runners was strong at the top, robust throughout, and incredibly deep. In comparison, this year’s group (though strong at the top) is rather thin. That difference between the two groups of running backs is really important.

FantasyLabs co-founder Jonathan Bales recently published a piece in which he noted that some teams seem not to take several important factors into account when drafting. I believe that the Cowboys are one of these teams.

Last year, the Cowboys forewent the option of drafting a running back at a discounted price when the position was something of a team need and there were many quality running backs available.

This year, to atone for that mistake, the Cowboys drafted a running back at an elevated price when the position was less of a need and there are fewer quality running backs available — a fact that probably drove Ezekiel Elliott’s acquisition cost higher than it would’ve been if he had been available in last year’s draft.

The Cowboys compounded last year’s mistake by overreacting to it.

It was a mistake, but it wasn’t a lethal mistake. It wasn’t a mistake that couldn’t be largely rectified by taking a cheaper but still competent running back later in this year’s draft.

The answer is pretty simple: The running back position isn’t very important.

It’s that those differences, in the big picture of today’s NFL, are almost meaningless.

And that fact, more than anything else, is why the Cowboys’ selection of Elliott at No. 4 made me want to eat a gallon of ice cream.

Does This Article Have Anything to Do With DFS?

No, but we can pretend that it does.

In DFS lineups (across a variety of sports), there are some positions that simply matter more than others. As someone attempting to construct a winning lineup, you are served best by devoting capital to the positions that matter.

Also, don’t fall into the trap of trying to redeem yourself now for mistakes you previously made. By definition, the only people concerned with redemption are losers.

Learn from your past mistakes but don’t try to pretend as if you can undo what you did.

Finally, when 2016 NFL DFS comes around, treat Zeke right away as if he is one of the best running backs in the league, because he probably will be. (And, naturally, that means that you should probably play him in cash games and fade him in tournaments.)

So at least some good will come out of Zeke being a Cowboy.

Sometimes it’s better to live in fantasy than reality.