In this positional breakdown, I’m looking at the quarterback who stands out the most in the individual Pro Models that Jonathan Bales, Peter Jennings (CSURAM88), Adam Levitan, Sean Koerner, Chris Raybon, Kevin McClelland (SportsGeek) and I have constructed.

UPDATE (Jan. 20): Running back Spencer Ware (hamstring) practiced fully on Thursday and Friday and will play this weekend.

On the Wednesday edition of The Action Network NFL Podcast, we talked about Mahomes as the slate’s top option, and it’s not hard to see why we’re enthusiastic.

Almost a lock to win the 2018 Most Valuable Player award, Mahomes painted a masterpiece of a campaign over the past few months: In the regular, he led the league with his 9.6 adjusted yards per attempt (AY/A) and 81.7 Total QBR. With his 5,097 yards and 50 touchdowns passing, Mahomes is only the second 5,000-50 quarterback in NFL history. The first was Peyton Manning in his record-setting 2013 MVP campaign.

To no one’s surprise, Mahomes has had the most productive fantasy season ever for a quarterback.

Mahomes is dominating the league with a position-high 26.3 FanDuel points per game. For context: Steelers quarterback Ben Roethlisberger is second with 22.3. Mahomes easily leads the position with an obscene +7.19 Plus/Minus, and his emergence has been the story of the season.

Mahomes’ weekly consistency is outstanding. Last week was the first time all season that he scored fewer than 18 FanDuel points, and he just barely fell short of the mark with 17.9. And it’s not as if he had a poor game: He completed 65.9% of his passes and led the Chiefs to 31 points.

In only four games this season has Mahomes failed to throw for either 300 yards or three touchdowns.

Although the Chiefs went 3-2 after their Week 12 bye, they are still probably the best team in the AFC, and on a per-game basis they’ve …

In the regular season, the Chiefs ranked first in scoring at 35.3 points per game, and Mahomes has been foundational to their success. No quarterback in NFL history has dominated in his first season as a starter the way Mahomes has.

The Chiefs have a solid implied Vegas total of 29.25 points.

Mahomes doesn’t have an especially great matchup. The Pats haven’t been highly exploitable with their 18.5 FanDuel points per game allowed to quarterbacks, and they are second overall with their 93.0 Pro Football Focus coverage grade.

Pats cornerback Stephon Gilmore leads all corners with his 91.1 PFF coverage grade: He will likely be responsible for defending wide receiver Sammy Watkins for most of the game. In Week 6, he shadowed Watkins, holding him to just two receptions for 18 scoreless yards on four targets.

Jason McCourty is a top-24 corner with his 78.6 PFF coverage grade, and he’s likely to shadow wide receiver Tyreek Hill with safety help. While Hill is one of the fastest players in the league, McCourty is by no means slow. He’s old for a corner at the age of 31, but in his 2009 pre-draft workouts he blazed a 4.30-second 40-yard dash. McCourty won’t be able to neutralize Hill, but he might be able to do enough to keep Hill from going off.

And safeties Devin McCourty and Patrick Chung are more than serviceable with their 78.6 and 75.4 PFF coverage grades. This season, the Pats are eighth in Football Outsiders’ pass-defense DVOA against tight ends, and Kelce was held in relative check in Week 6 with just 61 scoreless yards on five receptions.

If the Pats are able to limit the Chiefs through the air, it’s not hard to see how it would have occurred.

But it’s also not very likely to happen. The Pats play more man coverage than any other team in the league, and Mahomes has dominated against man coverage this season.

Patrick Mahomes vs. five defenses that utilized man coverage at a top-12 rate

Given that Mahomes dominated the Pats in Week 6 with 29.0 FanDuel points, he shouldn’t be significantly downgraded just because his primary receivers don’t have highly exploitable matchups. Greatness tends to find a way.

One drawback to rostering Mahomes is that he’s at Arrowhead Stadium. While playing at home is normally advantageous, that’s not necessarily the case with Mahomes and the Chiefs. With head coach Andy Reid (since 2013), no home team has made under bettors more money than the Chiefs have with their 33-17-1 under record (including playoffs), good for an A-graded 28.6% return on investment (per Bet Labs).

The outdoor and raucous Arrowhead Stadium is a hard place to play, especially in cold and windy weather, and it’s not just road teams that have played worse in Kansas City this season.

Throughout the Reid era, the Chiefs have been last in the NFL with their offensive home/road differential of -2.96 points.

Although the market is expecting a shootout, we could see fewer points than expected. Over the past 15 seasons, outdoor postseason games have a 53-70-4 over/under record. For comparison, domed postseason games are 28-9. And as of writing the forecast calls for a game-time temperature of 20 degrees.The weather will be such an important factor for this game that you can literally bet on it.

But the over has been a smart contrarian bet in cold games, especially since rematches between non-divisional opponents have trended to the over. The over/under opened at 59.5 points but it dropped to 54.5 because of a frigid forecast in Kansas City. Since then, however, the forecast has improved, and bettors have started to invest in the over, pushing the total to 55.5.

A high number of points could certainly be scored in this game. And in the playoffs, home favorite quarterbacks tend to outperform expectations.

Regardless of overall scoring, Mahomes is extremely unlikely to have a poor game, given that he has position-high median and ceiling projections in our Models. His upside is significant. With his unrivaled ball velocity (60 mph), Mahomes has made a habit of attacking defenses deep. He’s No. 1 in the league with 98 deep attempts (20-plus yards), 44 deep completions, 1,514 deep-passing yards and 15 deep touchdowns. Mahomes likes to air it out.

For a player with only 18 career starts, he’s been incredibly poised in the pocket. This season, Mahomes has been pressured on 34.7% of his dropbacks, but his 12.6% sack rate on such plays is the league’s second-lowest mark. And with a clean pocket, he’s No. 1 with a 131.0 QB Rating (PFF).

Reid has done a magnificent job of scheming to Mahomes’ strengths, streamlining his reads and enabling him to get the ball out quickly. When Mahomes can simply take the snap, focus immediately on his receivers and throw the ball, he’s the best quarterback in the league. On passes with no play action, he’s No. 1 with a 115.6 QB Rating. When holding the ball for fewer than 2.5 seconds in the pocket, he’s again No. 1 with a 127.7 QB Rating (PFF).

On Sunday I might look to bet on Mahomes’ props. To find the best bets in the props market, use our Player Props Tool, which is powered by our industry-leading projections. Since Week 1, the props with a bet quality of 10 have gone 235-119-12, good for a 64% win rate. Without question, you should supplement your DFS action with player props.

With a position-high +3.68 Projected Plus/Minus, Mahomes is the No. 1 FanDuel quarterback in all our Pro Models. 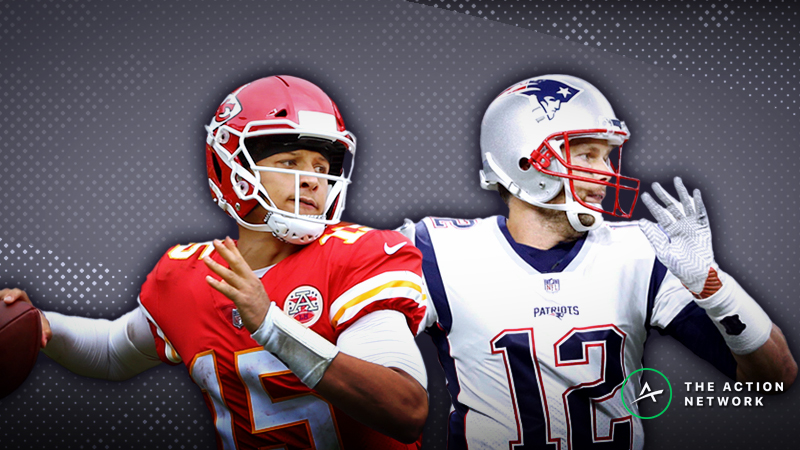