In this positional breakdown, I’m looking at the wide receiver who stands out the most in the individual Pro Models that Jonathan Bales, Peter Jennings (CSURAM88), Adam Levitan, Sean Koerner, Chris Raybon, Kevin McClelland (SportsGeek) and I have constructed.

Last week, one of my favorite NFL props was Thomas at +800 to lead the slate in receiving yards. With 171 yards on 16 targets, he didn’t disappoint. On the Wednesday edition of The Action Network NFL Podcast, we talked about Thomas as the slate’s top option, and it’s not hard to see why we’re enthusiastic.

With 321 receptions, Thomas is the No. 1 receiver in league history through his first three seasons. Even though this season he was 11th in targets with 147, he finished first in receptions with 125 thanks to his position-best 85% catch rate. Unsurprisingly, Thomas led all players this season with six games of 10-plus receptions.

By our numbers, the Saints are undervalued in this game, which has one of the highest postseason over/unders of all time. With 1,405 yards receiving, 1,135 air yards and 470 yards after the catch, Thomas is the primary playmaker in the passing game, and the Saints could air it out this week in a shootout. This is a rematch of the epic Week 9 contest that saw 80 total points, and rematches between non-divisional opponents have trended to the over.

Lots of points could be scored in New Orleans. It’s not for nothing that the Mercedes-Benz Superdome is called the Coors Field of fantasy football: It’s the NFL’s most fantasy-friendly venue: The Superdome has an A-graded 59-42-2 over/under record with Drew Brees at quarterback, good for a 14.2% return on investment for over bettors since 2006, when Brees joined the Saints (per Bet Labs).

The Saints have a slate-high implied Vegas total of 30 points: They have a real chance to finish the week as the highest-scoring team on the slate, given that they scored 45 points against the Rams earlier this season. And in the playoffs, home favorite wide receivers tend to outperform expectations.

But in general it probably doesn’t matter too much to Thomas where he plays: He has been a fairly splits-agnostic player throughout his career.

Regardless of where he plays, Thomas has been productive and consistent on a salary-adjusted basis, and that’s likely to be the case this week: He leads all wide receivers in our Models with his median and ceiling projections, and he’s the top receiver for the No. 1 team in The Action Network NFL Power Rankings.

But Thomas does carry some concerns with him. Referee Bill Vinovich has a 37-47-1 over/under record: This could be a high-scoring game, but it also wouldn’t be surprising if it went under, like last week’s 20-14 game. More importantly, Thomas has been far less productive since the return of running back Mark Ingram (suspension) in Week 5. His Ingram-based splits for the season are telling.

These splits make sense. In Weeks 1-4, the Saints had the league’s eighth-highest pass rate at 63.2%. Since then, they’ve had fourth-highest run rate at 47.4%. With fewer targets to go around, Thomas has predictably seen lower usage rates and been less productive.

But perhaps the playoffs are different. In the postseason, every contest is a must-win game, and teams are typically more aggressive in their desire to score points because they are playing against tougher opponents. In his three career playoff games, Thomas has been heavily relied upon by the Saints.

Even though the Saints have been a run-based team since Ingram’s return, Thomas could still see double-digit targets.

What makes Thomas especially desirable is his matchup against the Rams. There’s really no other way to put this: The Rams can’t guard Thomas. In Week 9, cornerback Marcus Peters shadowed Thomas, who punished the Rams with a 12-211-1 receiving performance on 15 targets. Against Peters specifically, he went 7-146-1 on nine targets.

With cornerback Aqib Talib back from his ankle injury, Peters has been playing almost exclusively out wide to the right, where the first-team All-Pro receiver has lined up on 47.5% of his snaps this season. With the success he had against Peters earlier in the season, the Saints might have Thomas run the majority of his routes against him this week.

As a rookie in 2015, Peters (then with the Chiefs) led the NFL with eight interceptions. In his second season, he was a first-team All-Pro shutdown savant. Last season, he had a career-high 81.7 Pro Football Focus coverage grade.

But this season he has been utterly exploitable. He owns a career-low 57.9 PFF coverage grade and has allowed a 69.5% catch rate this season. His quarterback rating allowed has nearly doubled.

The Rams defense is ninth in Football Outsiders’ pass DVOA, but Thomas should be able to have his way with whatever cornerback he faces.

On Sunday, I will almost certainly look to bet the over on Thomas’ props. To find the best bets in the props market, use our Player Props Tool, which is powered by our industry-leading projections. Since Week 1, the props with a bet quality of 10 have gone 235-119-12, good for a 64% win rate. Without question, you should supplement your DFS action with player props.

Thomas leads the position with a 63% Bargain Rating and eight Pro Trends on FanDuel, where he’s the No. 1 wide receiver in the Bales, Levitan, Koerner, SportsGeek and Freedman Models. 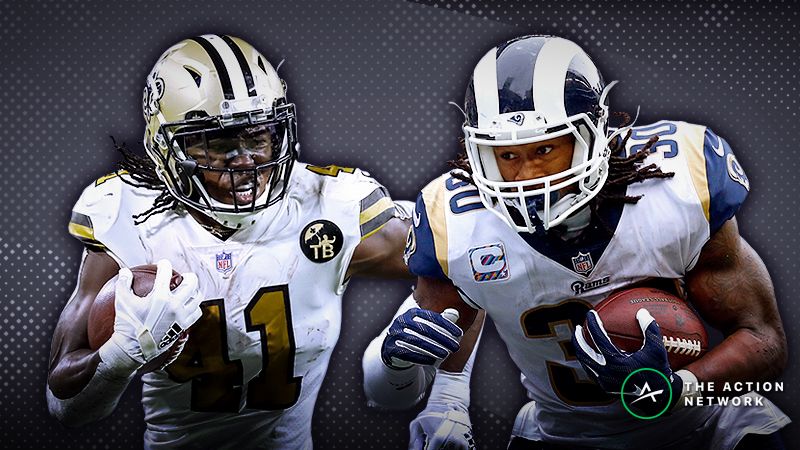