Larry Fitzgerald, Postseason Success, and the Small Matter of “Representativeness” 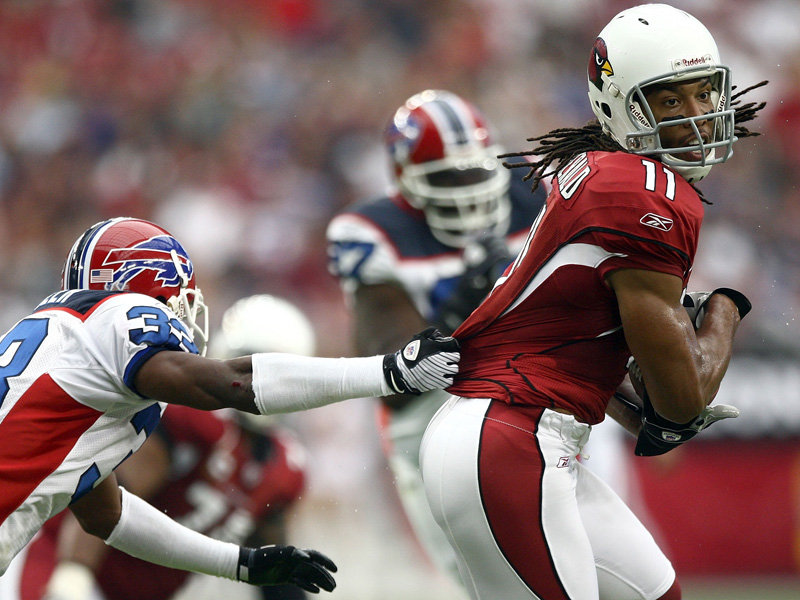 This is my first Fantasy Labs piece, and I don’t want to start by blaspheming a living legend, so instead I’ll start by saying that Larry Fitzgerald is a Hall of Famer and one of the best wide receivers of the last decade. He’s the type of player who deserves to win a championship.

2015: The Year of the Unrepresentative Fitz

Let me say that this season has witnessed a lot of misguided analysis revolving around Fitz, and I suspect that it has to do with his like-ability and people’s desire to see him succeed.

For instance, do you remember in Week 4, when everyone was going crazy about Fitz because he had averaged 7.7 receptions for 111 yards and 1.7 touchdowns in his first three games? For the rest of the season he averaged 6.6 receptions for 67.8 yards and 0.3 touchdowns per contest. Those aren’t repugnant numbers, and for the season Fitz had a very respectable 109-1215-9 receiving stat line, but that’s not quite the production that people were hoping for on a prorated basis after his hot start.

And what about the Fitz hype that saturated the Twittersphere in Week 15, when people anticipated that he would stud out against the Eagles because over the course of his career he had averaged 6.3 receptions per game for 108.3 yards, 1.3 touchdowns, and 25.2 fantasy points in a point-per-reception format? Do you remember that hype?

Those numbers are impressive — but they were also totally ridiculous in the way that they were used. People tossed around those stats as if they had predictive power. In reality they were just noise mistaken as signal.

As a site, we have collected thousands of data points that enable you to determine the value of certain trends in order to build your own player models — by the way, you should really check out these tools! (I’m new to the site: I have to say things like that) — but nowhere in our database can you find information relating to how a player has performed against a particular team . . . in six games . . . out of 181 games . . . across an almost 12-year career . . . because that type of data is meaningless.

For one, the sample was miniscule, including only 3.3 percent of Fitz’s career regular-season games. Heading into Week 15, Fitz had played the Eagles on average about once every two years. I hope that I don’t need to go into further detail about the problems with the sample size.

Secondly, and more importantly, the sample was utterly unrepresentative. What Fitz did in one game against one team as a 22-year-old second-year player in 2005 has no bearing on what he might do against that “same” team 10 years later, and similar statements could be made about games played in 2008, 2011, 2012. And more to the point, the sample is unrepresentative because the Cardinals and Eagles of 2015 bear little resemblance to those teams of years prior.

Different quarterbacks, different complementary wide receivers, different supporting offensive players, different defenses, different coaches, different circumstances . . . different teams. To borrow from Seinfeld, all that these teams have in common with their previous manifestations is laundry — and I doubt that even their uniforms are exactly the same.

Coincidentally, in Week 15 Fitz had three receptions for 43 yards and no touchdowns — one of his worst games of the season.

Why Am I Talking About This Now?

That’s a great rhetorical question. Thank you for asking.

I’m bringing this up now because ESPN is publishing love pieces on Fitz in which it’s stated as a matter of course that the postseason brings out the best in him, and people on Twitter are also talking about Fitz’s postseason production, noting that he is the first receiver in NFL history to have three 150-yard playoff performances.

And it’s true that Fitz has been a stud in the playoffs. In his eight career postseason games, he has 53 receptions for 912 yards and 10 touchdowns receiving. That’s impressive, and it might be true that, in general, Fitz does well in the playoffs when his team needs him.

But that might not be true — and, even if it is true, people shouldn’t take that information into account anyway when deciding whether to start Fitz this weekend in their daily fantasy lineups. As was the case previously, the sample in this instance is problematically small and drastically unrepresentative. Six of Fitz’s eight playoff games are from the distant past of Kurt Warner’s final two seasons, and the seventh game (in which Fitz had three receptions for 31 yards and no touchdowns) is from last season when Ryan Lindley pretended to be an NFL quarterback. Needless to say, those seven games have no bearing on Fitz’s current situation — and I know that you’re not going to ignore those games and then base all of your “Fitz is a postseason gawd” faith on what he did in one game — last game — right? #RecencyBiasMuch

I’m bringing all of this up because in a small slate with fewer options each player (especially each starting-caliber player) is that much more important and thus deserves that much more scrutiny. In such a slate, it would be tempting to look at Fitz, remember what he did last week, and then put him in your lineups almost solely because you’ve heard in the last few days that “Fitz plays big in big games.”

Again, that might actually be true. At that same time, that might only be a descriptive statement of what was true when Fitz was one of the three best receivers in the NFL over a half decade ago.

This is a Conversation About Process

Fitz might be a decent DFS option this weekend, but in our player ratings he has a Projected Plus/Minus of only +0.7 fantasy points for DraftKings and -0.9 for FanDuel.

If you want to play Fitz this weekend, that’s fine. Just make sure that you use a good process in reaching that decision. Play him because your research indicates that he will outproduce other receivers with comparable salaries. Play him because you have reason to believe that he will exploit his matchups against the Panthers defensive backs. Play him because you believe that what he has done over the last two seasons with Carson Palmer as his quarterback, Michael Floyd and John Brown as his running mates, and Bruce Arians as his coach is indicative of the success he is probable to have in this game.

Those numbers are useless. Don’t look at them. Instead, in making the start/sit decision for Fitz (and all other players in the slate), determine to use the best information available to you right now.

As it happens, I believe that information is found at Fantasy Labs. That’s why I’m here — and that’s probably why you’re here too.

Matthew Freedman is a fulltime writer for Fantasy Labs and a contributor to RotoViz and Pro Football Focus Fantasy. He is (not) the inspiration for the character in The League who shares his name. You can follow him on Twitter @MattFtheOracle — but you probably shouldn’t.