While most daily fantasy players are more familiar with the usual salary-cap structure, DraftKings also has tournaments in a pick ’em style: There are no player salaries, and you simply select one player across the eight tiers.

This style of game allows you to quickly create lineups because you don’t have to spend time weighing cap costs against points. Just choose the best player. For FantasyLabs readers, our Models — powered by Sean Koerner’s No. 1 in-season ranking — are a massive edge in choosing the best players and making weekly profits in Tiers.

Here’s a breakdown of the DraftKings Tiers slate for Week 10 of the NFL season.

Like a robot pushing past the limits of mere humans, Mahomes appears to be getting even better. Over the past four weeks he’s averaged 32.4 fantasy points, up from is average of 29 points per game over the first five weeks. Vegas has the Chiefs’ implied score as 33.25 against the Cardinals, and Mahomes accounts for 81.6% of Kansas City’s offensive scores this season. He’s the undoubted cash play again this week.

Rodgers and the Packers get Miami at home in a game that the Vegas expects to be uncontested: Green Bay is a 10-point favorite as of writing (see live data here). Despite game script that would favor a rushing attack, Rodgers doesn’t see a drop-off when the Packers are favored by a touchdown or more (via our Trends tools).

Rodgers when the Packers are Favored by 7+ Points

Mahomes will be the highest-owned player in Tier 1, but our Models have their ceiling projections within a point of each other. Fade the chalk and play Rodgers in tournaments.

Tier 2: The Next Passers

Since the start of 2017, Brees is averaging 34 attempts per game. That would be his lowest single-season mark in New Orleans. However, that script flips when the Saints are in shootouts.

The new Drew Brees has been not the greatest for fantasy but when they are in serious shootouts the fireworks are on. This week the Saints/Bengals game has a 54-point total. Per the @RotoViz Game Splits App. pic.twitter.com/CcbSGpC4L5

The Bengals’ secondary is allowing the fourth-most points to opposing passers and the Cincinnati offense should score enough to keep the Saints throwing. Brees is in a smash spot in Week 10.

Fitzpatrick owns the third-highest median projection this week on the back of his absurdly efficient season. His 9.7 yards per attempt and 9.2% touchdown rate rank first in the league. This efficiency is even more pronounced by his volume: He’s thrown 37.8 attempts per game in contests he starts and finishes.

The upside is clear, but no quarterback has the downside of Fitzpatrick, either. He’s been benched once already. He’s the ideal tournament risk.

Gurley finally came back down to Earth last week, scoring a little less than 20 points. He’s still the league-leader in rushing attempts (182) and yards (868). Gurley is also top 10 in running back targets (48) and receiving yards (337). Volume and an incredible Rams offense has him scoring 1.8 times per game and a single down week is no reason to fade him in cash.

Kansas City is currently a 16.5-point favorite over Arizona, and should the Cardinals come close to that, Hunt will be tasked with grinding out the clock early in the game. According to our Matchups tool, the Arizona defense has also funneled scoring to running backs:

Hunt is the perfect pivot from the chalkiest passer (Mahomes) and rusher (Gurley) this week.

Adams and Rodgers have a .77 correlation of fantasy scoring, making the stack a must in lineups with Rodgers. Adams owns 32% of Green Bay’s Air Yards and 26% of the targets. On a Rodgers-led offense, this volume has gotten Adams into the end zone seven times. Expect more to follow on Sunday.

Allen has been performing similarly to his 2017 season, averaging 5.9 receptions for 78.8 yards per game. The major difference has been the most variance-based fantasy stat — touchdowns — which he has just one of so far this season. The Chargers have an implied score of 30 points this week. Touchdown regression is coming for Allen.

Already having had a bye, Zeke is still fourth in the NFL with 149 rush attempts. His passing game usage is at a career-high as well. He’s been targeted 5.1 times per game and has already reached a career mark for targets in a season.

He accounts for 42.2% of the Cowboys red-zone touches and remains a top 10 play at the running back position this week.

Evans logged a limited practice on Thursday and is listed as probable per our News Feed. Despite a nagging knee injury, Evans has seen double-digit targets in five of eight games, including the past three. Fitzpatrick returning also introduces the potential for stacking because Evans and Fitzpatrick have a .66 correlation while Evans and Jameis Winston are negatively correlated.

If he’s healthy, the Evans-Fitzpatrick combo could be extremely profitable.

After a forgettable first game back from his suspension, Edelman has returned to being an integral part of the Patriots’ offense. He’s been on the field for at least 90% of their snaps in every week after that game and has had a floor of 14.6 points and seven targets. With injuries to Gronk and Sony Michel, Edelman figures to be a staple of the New England offense for the foreseeable future.

The Browns made Chubb their featured back by trading away Carlos Hyde after Week 6. Since then, Chubb is averaging 19.3 carries, 3.3 of which are coming in the red zone each game. He’s also averaging an additional two targets per game.

This week he faces the Falcons, who are giving up the second-most points to opposing running backs. Chubb has the volume and the matchup of a sneaky tournament play.

With the departure of Golden Tate, Jones was poised for a breakout last week and burned anyone who played him. But one bad performance doesn’t make a man — volume mostly does — and Jones is getting a lot of it. He leads Detroit’s current receiving core with 55 targets and 802 Air Yards.

Bet on volume and double down on Jones.

When the Rams aren’t looking at Gurley inside 10 yards, they go to Kupp. He’s top 10 in targets within 10 yards of the end zone at seven and leads all Rams’ receiving options. This is all despite missing two games with a knee injury. The Rams-Seahawks outing features a 50-point over/under and Los Angeles has an implied score of 30.5 points.

If the Rams are going to score, expect Kupp to be involved. 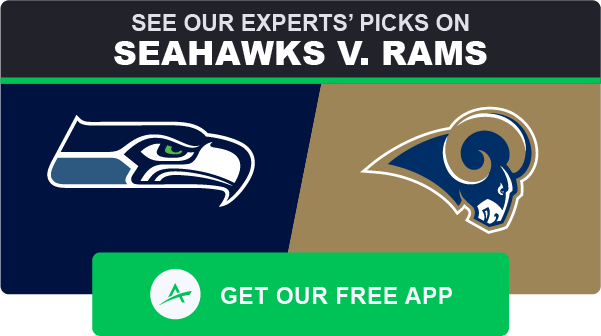 MVS is emerging as a big-play threat on a weekly basis. He’s averaging 10.8 yards per target on 33 targets on the back of frequent a 20-yard catch on 21.2% of his targets. This mark is seventh among players with 30 targets. With Geronimo Allison headed to Injured Reserve, MVS will get more chances to keep making big plays.

Jones might get the nod in cash lineups, but Golladay is the preferred play in tournaments. The two have a -.2 correlation. Golladay has been more efficient, averaging 2.8 more yards per target than Jones and has a slightly higher ceiling projection per our Models. In tournaments, opt for Golladay’s premium efficiency.