This piece will identify some of my favorite DFS stacks of the weekend. Be sure to use our Stacking Tool found within our Player Models to find the highest projected stacks, the stacks that figure to be chalky, and more. Our Correlations page is also a great resource to find hidden edges in stacking positions and games.

Fantasy Football doesn’t have to be hard.

The Chiefs are at home, with the highest over/under on the Sunday slate, against one of the NFL’s worst pass defenses.

The Falcons have allowed the most schedule-adjusted fantasy points to opposing wide receivers. Atlanta is coming off a 31-27 loss to Tampa Bay where they allowed both Mike Evans (six receptions, 110 receiving yards) and Antonio Brown (five receptions, 93 yards, one touchdown) to post quality DFS stat lines.

While leading wide receiver Tyreek Hill (22.7 fppg, second among WRs) has been incredible, he was limited in practice this week due to a hamstring injury. With Kansas City favored by 10 points, the Chiefs are unlikely to push Hill unnecessarily against an inferior opponent at home.

We will use this opportunity to pivot to his much cheaper teammate, Mecole Hardman. In Week 15, Hardman’s 23 routes were his most since Week 9. Hardman also tied a season-high with nine targets which produced a massive 143 air yard total. His elite speed (4.33) serves as the foundation for the 12th-best target separation among all wideouts (PlayerProfiler).

The huge savings on Hardman allows us to stack the clear dominant DFS tight end, Travis Kelce. He ranks first at the position in the following categories:

Kelce has been so efficient he is actually second in receiving yardage among all tight ends and wide receivers, trailing only DeAndre Hopkins by just six yards. He has eight or more receptions in seven straight weeks, with 109 or more receiving yards in five of those games.

Kelce has a premier matchup against a Falcons team that has allowed the second-most receptions (80), seventh-most receiving yards (806), fourth-most touchdowns (nine), and sixth-most fantasy points to the tight end position.

Mahomes and Kelce’s price was not overly restrictive, given the savings with Hardman. Using the FantasyLabs optimizer, I generated the following two DraftKings lineups: 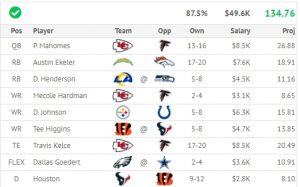 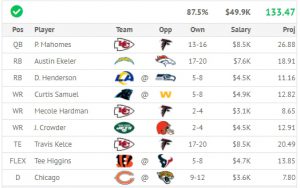 Kelce’s ownership is certainly high, but he projects as “good chalk” in Week 16. The pivot onto Hardman could pay huge dividends if Hill (projected ownership 21-25%) is limited in any way.

To win a large field DFS tournament, you need to think outside the box.

Broncos quarterback Drew Lock put forth a brutal Week 14 performance in a 48-19 home loss to Buffalo. The inconsistent Lock threw for only 132 passing yards, with one touchdown and one lost fumble. It was the overall QB30 performance.

However, the week prior, Lock turned in the overall QB6 stat line with 280 passing yards and four touchdowns in Denver’s 32-27 win at Carolina. Lock has the ability for boom weeks, and we are projecting another one at the Chargers.

In their first meeting in Week 8, Lock torched Denver for the overall QB7 performance. He threw for 248 yards, three touchdowns and one interception. Los Angeles has allowed the eighth-most schedule-adjusted fantasy points to opposing quarterbacks, and the Chargers will likely be without start defensive end Joey Bosa (concussion).

Lock has started to build a connection with tight end Noah Fant, who posted eight receptions, 68 receiving yards, and a touchdown in Week 15, good enough for the overall TE3 stat line. The Chargers allow the seventh-most fantasy points to opposing tight ends, and Fant tallied seven receptions in their earlier meeting.

I’m completing this stack with unheralded wideout Tim Patrick, who remains affordable and efficient. Patrick has posted six touchdowns on just 46 receptions, and missed the Week 8 game with a hamstring strain. He has four games of WR2 or better performances, and leads the Broncos in deep-ball receptions (10) and deep-ball target share (28%) (EstablishtheRun).

The cost of this stack is cheap enough to allow room for some other big plays in our lineup. Using Lock, Patrick, and Fant as my based, I created the following lineups in both FanDuel and DraftKings using our FantasyLabs optimizer: 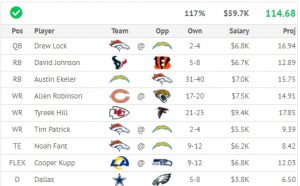 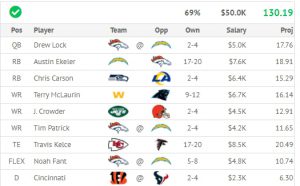 This also gave me exposure to high-priced options like Travis Kelce, Austin Ekeler, and Allen Robinson.

To win a large GPP, you need to be contrarian. Going with a triple Broncos stack brings huge upside and low ownership at a great price.

The David Montgomery loyalists have been handsomely rewarded down the stretch of the 2020 fantasy season. He has been dominant over the past month, with consecutive performances of overall RB6, RB1, RB6, and RB2.

Montgomery is one of the few three-down workhorse backs, ranking sixth in rushing yards (906) and ninth in receptions (43). He has nine games of three or more receptions. Montgomery faces a Jacksonville defense that ranks fourth in schedule-adjusted fantasy points to opposing running backs (4for4).

The Bears defense has once again been pressuring the quarterback, averaging four sacks per game over Chicago’s past three contests. Chicago allows the fourth-fewest fantasy points per game to opposing wide receivers, and Jacksonville lead running back James Robinson enters this game with knee and ankle injuries.

With a 7.5-point spread, this profiles as a comfortable Bears win with a modest game total of 47points. This is a pick based on game script and Montgomery’s momentum. Whether it’s Gardner Minshew or Mike Glennon at quarterback, the Bears opportunistic defense should feast.