In this piece, I highlight tight end who stand out in our large suite of analytical fantasy tools, most specifically our FantasyLabs Models. While the Models are built for daily contests, this is an all-purpose fantasy article with actionable information for all formats.

Here’s where they place within our Week 12 fantasy football rankings (as of Friday morning).

Of these six, the two who stand out most to me are Kelce and Waller. The other guys I will highlight as needed in the section on players with week-winning upside.

No tight end in NFL history has more 1,000-yard seasons than Kelce, who has been just as dominant this year as ever at the age of 31.

Since quarterback Patrick Mahomes became the full-time starter in 2018, Kelce has been a fantasy TE1 in 86% of his regular-season games (per RotoViz NFL Stat Explorer). 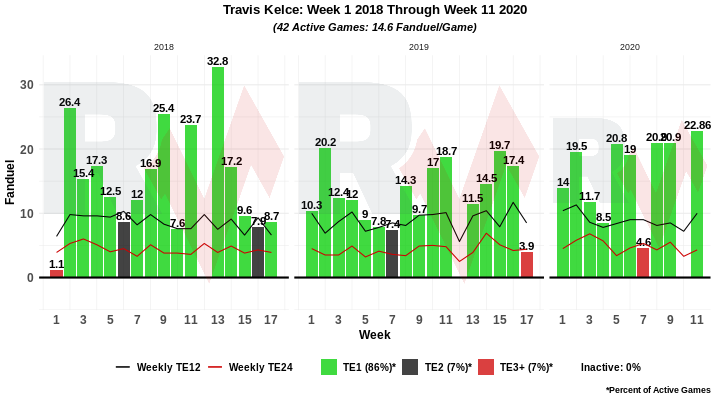 Although the Buccaneers are No. 2 overall with a -11.6% pass-defense DVOA, they are specifically No. 23 with a mark of 12.9% against tight ends, so the matchup isn’t onerous (per Football Outsiders).

Kelce is basically the Jaime Lannister of tight ends: “There are no men like me. Only me.”

But the guys who are most similar to Kelce in talent and volume to play the Bucs have done well (minimum of six targets).

From a macro perspective, there’s a lot to like about Kelce’s situation. The Chiefs have a slate-high 29.25-point implied Vegas total, and since head coach Andy Reid joined the franchise in 2013, they have been the league’s most profitable road team, going 39-20-1 against the spread (ATS) as visitors, good for a 30% return on investment (ROI, per our Bet Labs database).

In season-long leagues, Kelce is a weekly must-start top-three TE1. He leads all tight ends in our Models with his median, ceiling and floor projections.

In DFS, Kelce is a strong pay-up option for cash games: He has position-high +3.63 and +2.97 Projected Plus/Minus values on DraftKings and FanDuel.

Kelce is also a viable candidate in guaranteed prize pools. Over the past five-plus years, Kelce has had a 0.76 correlation with his quarterback (per our FantasyLabs Correlations Tool). If Kelce has a big game, Mahomes probably will too. For tournaments, use our Lineup Builder to stack Kelce with his passer.

Kelce is the No. 1 tight end in the Koerner Model for FanDuel, where he has a position-high 91% Bargain Rating.

Let’s start with the matchup: The Falcons have allowed a league-high 11.0 fantasy points per game to opposing tight end units with 57-622-8 receiving.

Any tight end is in play when facing the Falcons — and Waller is one of the league’s best tight ends, ranking No. 1 at the position with a 28% market share and 0.57 WOPR.

Among tight ends, he trails only Kelce and Kittle with his 80.7 AirYAC per game.

Waller did almost nothing in a wind-impacted Week 8, and he underperformed against the tight end-stingy Patriots and Broncos in Weeks 3 & 10, so he’s not a fully matchup-proof player, but he fortunately has the slate’s best matchup, and in every other game this year he has looked every bit like the guy who led the Raiders last year with 90-1,145-3 receiving on 117 targets.

Since last year, in only one game has Waller not been at least a fantasy TE2, and much more often than not he has been a TE1. 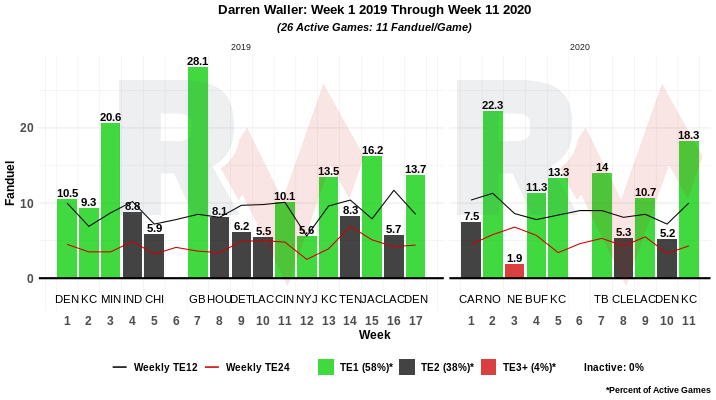 Waller is a locked-in top-three TE in season-long leagues and the No. 1 option in the Bales, SportsGeek, Hodge and Freedman Models for FanDuel, where he has a position-high 10 Pro Trends.

Mark Andrews, Baltimore Ravens (+4.5) at Pittsburgh Steelers (45 O/U): On the one hand, the Steelers have held opposing tight end units to a league-low 4.5 fantasy points per game on 36-364-1 receiving. They are No. 1 against the position with a -72.8 pass-defense DVOA against the position. On the other hand, Andrews has an NFL-high 26% market share over the past two weeks and I had only two pieces of pie yesterday.

Hunter Henry, Los Angeles Chargers (+5) at Buffalo Bills (53 O/U): After scoring just one touchdown in his first eight games, Henry has scored in back-to-back weeks. Opposing tight end units are No. 6 against the Bills with 9.6 fantasy points per game on 59-642-6 receiving, and the Bills look like they will be without top coverage linebacker Matt Milano (pectoral, IR). Henry is the No. 6 tight end with 69.4 AirYAC per game.

Noah Fant, Denver Broncos (+6) vs. New Orleans Saints (44.5 O/U): Despite playing through various injuries (ankle, ribs), Fant is No. 4 on the year with 71 AirYAC and No. 7 with 6.4 targets per game. Fant is just 20-203-0 receiving in five games since returning from injury in Week 7, but his underlying numbers are still encouraging.

Jonnu Smith, Tennessee Titans (+3) at Indianapolis Colts (51.5 O/U): Since suffering an injury in Week 6, Smith (ankle) is an anemic 12-117-2 receiving on 22 targets in six games, but for the season Smith is tied with Travis Kelce with a position-high seven touchdowns receiving, and in Week 10 he added a one-yard rushing touchdown. Only Kelce has more fantasy TE1 performances this year than Smith has with seven. 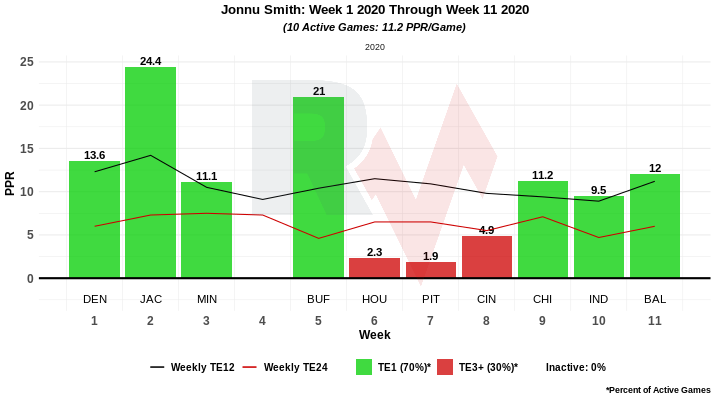 Smith is No. 6 at the position with a 1.26 RACR (minimum of three targets per game).

RACR (Receiver Air Conversation Ratio) is a stat created by Josh Hermsmeyer. It measures the efficiency with which pass catcher converts targets and air yards into receptions and yards after the catch.

Eric Ebron, Pittsburgh Steelers (-4.5) vs. Baltimore Ravens (45 O/U): Without strong safety Earl Thomas (released this offseason), the Ravens are significantly less imposing against tight ends than they were last year. Overlooking his Week 1 letdown, Ebron has a workable average of six targets targets over his past nine contests with fewer than five targets in just one game.

Hayden Hurst, Atlanta Falcons (+3) vs. Las Vegas Raiders (54 O/U): Although he’s not considered one of the best tight ends in the game, Hurst has been a fantasy TE1 in 60% of his games this year. 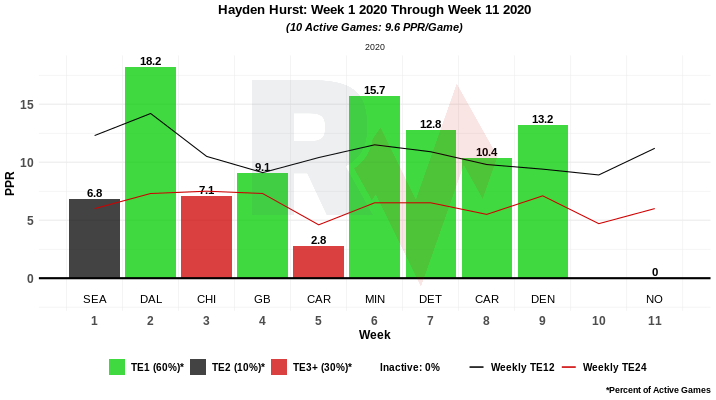 Hurst (ankle) missed practiced on Wednesday and Thursday, so his injury status should be monitored going into the weekend, but his 2018 Austin Hooper impersonation has been on point this year.

Light your money on fire.

Mo-Alie Cox, Indianapolis Colts (-3) vs. Tennessee Titans (51.5 O/U): This isn’t saying much, but Alie-Cox is the Arbitrage Trey Burton. In their six games together …

… Alie-Cox has actually outproduced Burton as a receiver on far less volume.