This is the 134th installment of The Labyrinthian, a series dedicated to exploring random fields of knowledge in order to give you unordinary theoretical, philosophical, strategic, and/or often rambling guidance on daily fantasy sports. Consult the introductory piece to the series for further explanation.

A quick note: This piece contains a lengthy discussion of a boring wide receiver. Nevertheless, this piece is not about football. It’s about DFS — and a little about football.

This weekend I listened to the 130th episode of The Daily Fantasy Edge, or (as I call it) The Hedge. Since FantasyLabs Co-Founder Peter Jennings (CSURAM88) is on the show maybe 35 percent of the time, that nickname makes sense.

Anyway, on this episode of The Hedge host Adam Levitan was joined by Josh Norris of Rotoworld, NBC Sports, and Hollywood. Josh was on the show to talk about the 2017 NFL Draft and add some class to the proceedings. Around the 11:22 mark, Levitan said this:

I’m always thinking about how I can use my time most efficiently, and I strongly, strongly believe that player evaluation is one of the worst uses of my time, mainly because talent is rarely what makes a guy great playing DFS, right? Like it’s far, far more important to understand opportunity, market share, play-calling tendencies, matchups, quarterback play, etc., etc. — all that stuff is so, so, so much more important — you know, roster construction, salaries — all that stuff is so much more important than talent. Talent is so far down at the bottom.

If you’d like to listen to the episode, here you go:

Why am I mentioning this?

To be clear, I agree with Levitan that (in most instances) talent is less important than opportunity and many of the other factors he listed. At the same time, over the long run (I believe) talent tends to emerge and earn opportunity. As a result, there’s perhaps an edge to thinking about talent more than most DFS players contemplate it. Because they tend to focus on the short-term circumstances of particular slates and not long-term factors like talent, many DFS players risk missing out on hidden value.

An Exampola: Long- vs. Short-Term Perspectives

Patriots wide receiver Danny Amendola is often ignored by DFS players. Whenever he has a productive game, people act as if it unimaginably came from nowhere and is the most anomalous of outlier occurrences even though in two of his first three seasons with the Patriots he was a regular contributor:

Notice that in 2015, he caught an absurdly high 74.7 percent of his targets, and that before last season his career catch rate was an elite 67.7 percent. For reference, here are some career catch rates of other receivers.

Here’s the point: Entering 2016, reasonable people probably should’ve expected that over the course of the season Amendola would catch a high percentage of his passes and score perhaps two to four TDs.

Naturally, in 2016 Amendola caught 79.3 percent of his targets for four touchdowns in 12 regular season games. He was targeted only 29 times in the regular season — so his TD production was extreme — but he was also targeted in the red zone seven times and caught all of those targets. In the big picture, it’s not outrageous for a guy with a high catch rate to convert seven relatively short targets into receptions, and it’s also not outlandish for a wide receiver to convert at least 50 percent of his red zone receptions into TDs. Here are the 2016 wide receivers (not to mention a number of tight ends) with at least seven red zone receptions and a 50 percent TD/rec rate in the red zone:

Here’s the point: Given Amendola’s long-term trends in New England, his high catch rate (a proxy for talent or at least an indicator of his ability to work well with his quarterbacks), and the number of times he was targeted in the red zone, no one should’ve been surprised in any given regular season game when Amendola scored a TD: He was likely to score a TD at some point.

Similarly, when Amendola scored a TD and a two-point conversion in Super Bowl 51, it wasn’t entirely random. Sure, it was unlikely for Amendola to be targeted 11 times (12 if you count the two-point target) — but it wasn’t really a surprise that Amendola caught 8-of-11 (or 9-of-12) targets or that he turned his two (or three) red zone targets into a TD (and a two-point conversion). He had been catching a high percentage of his targets and turning about 50 percent of his red zone receptions into scores all season.

On a slate-by-slate basis, Amendola is never likely to be a player who stands out in our Player Models. Nevertheless, Amendola is a talented player. Although no player has meant more to Brady over the last four years than tight end Rob Gronkowski, Amendola has been almost as useful to Brady on a per-target basis as Julian Edelman (per the RotoViz AY/A app): 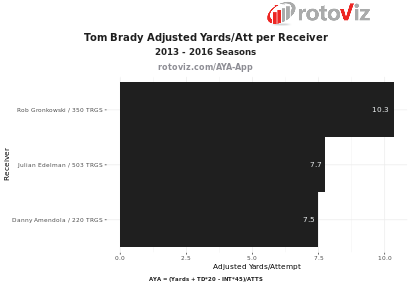 The short-term perspective would probably call for zero exposure to Amendola every slate. Because Amendola is actually more talented than most people appreciate and because his talent is greater than his opportunity, the long-term perspective would probably call for strategic (and contrarian) limited exposure each slate, just in case his opportunity ‘randomly’ catches up to his talent and he scores one of the few TDs he’d be expected to score before the season started.

Per our Trends tool, Amendola on average had 1.2 percent DraftKings ownership in large-field guaranteed prize pools in 2016. In Week 2 he scored 19.8 DraftKings points. In the Super Bowl he led all wide receivers in scoring with 23.8 DraftKings points. With his low ownership, he positioned his DFS lineups to compete for the top spots in GPPs when he went off.

“You’re Trying to Beat Your Opponent”

Last week, I provided my annotations to the DFS panel at the 2017 Sloan Conference. CSURAM88 was one of the panelists as was Renee Miller, a neuroscientist at the University of Rochester and a smart DFS player who’s appeared on The DFS Roundtable.

Early in the panel, Renee dropped this dime:

When it comes to professional players like Amendola, here’s what many DFS players are doing (and why): They ignore his long-term trends because DFS is a short-term game, and they ignore his talent because they’re focused primarily on opportunity. As a result, whenever Amendola goes off they neither imagine it could happen nor benefit from his production.

Before Super Bowl 51, Amendola had played 63 games with the Patriots (including the playoffs). In eight of those games (12.7 percent), he’d scored at least 20 DraftKings points. Was it really unthinkable that he could have a significant performance against the Falcons?

When something happens almost 13 percent of the time, it’s not random. It’s something that needs to be taken into account, especially since way too many people act as if 13 percent is effectively zero percent in the short term.

Arguably, an awareness of talent offers a contrarian edge in DFS because it’s the factor most ignored by the masses. When you’re trying to beat your opponent, taking small positions on low-salaried and low-owned talented players is how you do it. In the short term, opportunity is more important than talent. In the long term, talent — especially when it’s overlooked — can lead to massive and Black Swan-seeming DFS performances.

I’m tempted to talk about Tyreek Hill and about Tavon Austin — but I’ve probably done that enough already.

What I’m about to say I swear doesn’t make me an honorary host of The Hedge; it just makes me a Talebian practitioner.

Here it is: The positive expected value long-term approach is to buy opportunity in cash games and short it in GPPs.

This is similar to the strategy Nassim Nicholas Taleb discusses in Fooled by Randomness. At one point, he thought that the market had a 70 percent chance of moving up and 30 percent chance of moving down — but he was still shorting the market. Why? Because the outcomes of those two events he believed to be asymmetrical. If the market moved up, it would do so only a little bit, but if it dropped it would drop substantially. Over the short term, the odds favored being long on the market. Over the long term, however, the smart move was to be short.

And the talented player whose opportunity is incommensurate with his ability?

When randomness strikes, opportunity crumbles and latent talent emerges. By the way, I’m about 97 percent sure I’m the first person in DFS to use the phrase “latent talent” this month, so I’m basically a genius. It’s the dyslexic’s palindrome du jour.

“Able Was I Ere I Saw Elba”

Chase opportunity in cash games, strategically invest in cheap (and antifragile) talent in GPPs, and remember that the NFL regular season is only four months away.

Previous installments can be accessed via my author page or the series archive.

How the Wise Decide: The Six DFS Principles of 21 Business Leaders