The NFL Draft, Why We Care So Much, and Why Rookies Win Us DFS Money 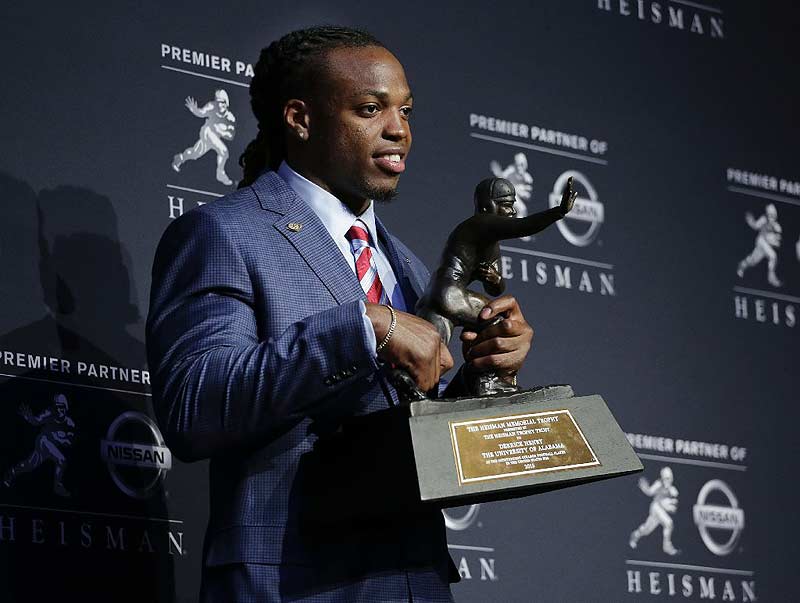 In the Freedman household, Christmas falls on a different day each year. This year, it falls on April 28th — the day that the NFL Draft begins.

This is the 42nd installment of The Labyrinthian, a series dedicated to exploring random fields of knowledge in order to give you unordinary theoretical, philosophical, strategic, and/or often rambling guidance on daily fantasy sports. Consult the introductory piece to the series for further explanation.

The NFL Draft is Tomorrow!

Tomorrow is April 28th, a.k.a. Freedman Christmas. Yesterday, Jonathan Bales published a piece on why “Best Player Available” is a shortsighted NFL Draft strategy, stating that the post “will have indirect applications” to DFS.

Frankly, we’re all lucky that he published that piece only yesterday. If he had published it a month ago, you would’ve read 12 Labyrinthian NFL Draft pieces by now — and I wouldn’t have had the decency to pretend that even half of them they were related to DFS.

Instead, you’re getting just one of those pieces. This piece. And I’ll try to pretend that this relates to DFS, as long as you pretend with me.

Have I mentioned that tomorrow is the F*CKING NFL DRAFT???!!!!

Why Do We Care So Much About the NFL Draft?

As fans, we care about the NFL Draft because that’s where championships are won and lost. I love the playoffs and the Super Bowl — but what happens in January and the first half of February is the direct result of the scouting and drafting that occurs from February to late April.

We care about the NFL Draft so much because it isn’t just the high point of the offseason. It’s the “everything” of the regular season.

Similarly, as DFS players we care about the NFL Draft because . . . it’s the most important DFS day of the year.

I’ll say it again: The NFL Draft is the most important DFS day of the year — for three reasons:

Let’s explore these three points, one point at a time.

NFL Rookies Have the Largest Fantasy Impact of all Rookies

It’s baseball season. (And here is where I am obligated to remind you that you should check out the new advanced MLB data in our Trends and Player Models tools!) Let’s start with baseball.

In MLB, rookies don’t typically have huge impacts because they A) typically bounce back and forth between the minor and big leagues for a few years and B) rarely if ever have a “true” rookie season. I know that Mike Trout — who is a rarity, by the way — won Rookie of the Year and the American League MVP as a 20-year-old rookie in 2012 . . .

But of course he also played 40 games in 2011. Which one of those years was really his rookie season? The one in which the world and DFS platforms were introduced to him and he played nearly a quarter of a season? Or the one in which he became a full-time player?

In the NFL, do you know what they call a first-year running back who gets playing time in four games? A rookie.

Let’s not even talk about NHL rookies, because I know almost nothing about the NHL. I do know, though, that we don’t typically see multiple rookies in the same year finish as top-10 players.

And what about rookies in NASCAR and PGA? They can have an impact, but it’s rare for them to dominate.

And what about the NBA?

This next part deserves its own section. There have been a number of great NBA rookies. Wilt Chamberlain was a great first-year player. Michael Jordan, David Robinson, and Shaquille O’Neal all made immediate impacts. Even Karl-Anthony Towns made an impact this year.

But in the 3-point era (from 1979 to the present day), only 32 rookies have scored at least 1,503 points in a season (per Basketball Reference). And that’s rookies at all positions. Here’s the table: 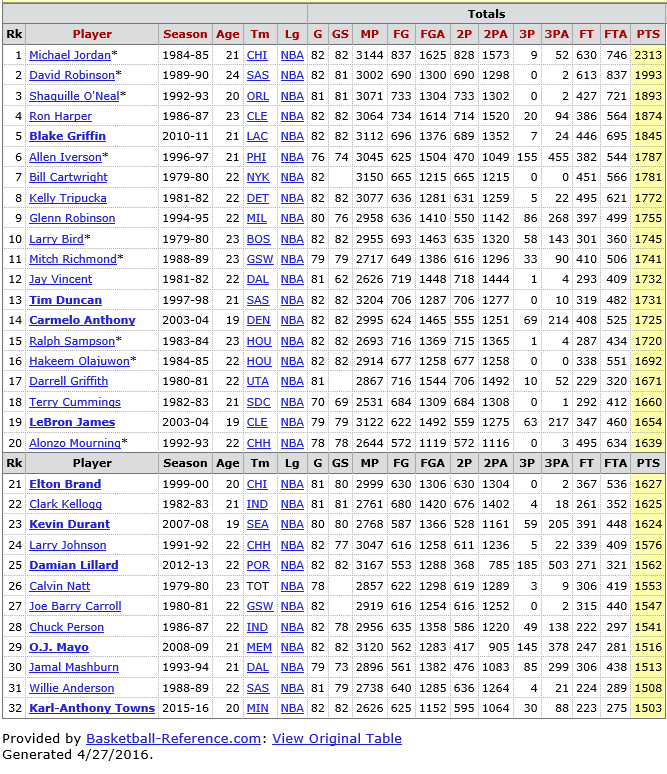 For those keeping track, that’s an average of 0.88 NBA rookies each year who hit the 1,500-point benchmark.

How does that compare to the NFL? Since the league went to a 16-game season (in 1978), there have been 55 rookie running backs to surpass the 1,000-yard rushing benchmark (per Pro Football Reference). Remember, those are players at only one position. Here’s the table:

That I had to make the table so small so that I could get all of it in one screenshot should tell you something.

And note that this screen is just for 1,000 rushing yards. This cohort doesn’t include Emmitt Smith, who had “only” 937 yards rushing (but 1,165 scrimmage yards and 11 touchdowns) as a first-year player who finished in the top eight at his position. It also doesn’t include last year’s rookie phenom David Johnson, who rushed for only 581 yards but still managed to finish with 1,038 scrimmage yards and 13 all-purpose TDs on his way to a top-eight positional finish.

And we haven’t even mentioned rookie quarterbacks, wide receivers, or tight ends . . . but do I really need to remind you that Cam Newton was a top-three fantasy QB right away, or that Randy Moss led the NFL in TDs receiving as a rookie, or that Rob Gronkowski had double-digit TDs in his first season?

We have seen a lot of great NBA rookies, but as a cohort they don’t hold up to the guys who contribute right away in the NFL.

If a rookie in baseball or basketball is mispriced, the DFS platforms have 162 and 82 games to get the pricing right. They have the luxury of waiting a little bit to see if production is random or representative.

But in the NFL, a DFS platform has only 16 games to get the pricing right on a player. If a guy has a big game, platforms either can aggressively elevate his price or moderately adjust it upward. Either way, the platforms are at risk of continuing to misprice the player through overreaction or underaction. (Also, if “underaction” isn’t officially a word, it should be.)

And the same can be true for a guy who has a bad game. If a platform aggressively lowers his price or just bumps it down a little, the platform is still at risk of mispricing the player.

The small sample size of the NFL season means that the average NFL player can be mispriced for a substantial part of the season, especially if he produces in a manner that was not expected. And, for rookies, who don’t have a history of NFL production for platforms to consult, the difference between actual production and expected production (or what we call Plus/Minus) can be immense, positively or negatively.

NFL rookies are more impactful than rookies in any other sport. They also play in the sport that has the smallest sample size, and so (in comparison to other rookies) they tend to be mispriced for the largest percentage of their rookie campaigns. And, as a cohort, rookies probably tend to be mispriced more than veterans (whose situations and prior production enable platforms to price them more accurately).

And, of course, exploiting discrepancies and inefficiencies in pricing is how DFS players make money.

For this reason, NFL rookies might be the most important professional athletes in the entire DFS industry, especially for those who play actively in guaranteed prize pools.

NFL DFS is the Most Lucrative of All DFS Sports

How fortunate we are that the sport with the most money in it is also the one that features the most exploitable type of player in DFS? — the player with unexpected production and relatively few games for the platforms to correct his pricing?

It’s like a perfect storm of opportunity. And tomorrow will emerge from their cocoons the butterflies whose flapping wings will cause that storm.

Just as NFL teams win championships at the NFL Draft, so too do DFS players. (And I suppose that this piece could serve as a subtle reminder not to overvalue rookies in non-NFL sports. #Utility)

Whoever evaluates NFL rookies and their salaries correctly will win DFS money in the Fall. Whoever doesn’t, won’t.