Using our Stacking tool found within our Player Models, this piece will identify some of the top stacks of the weekend. Check out our Correlations page as well to find hidden edges in stacking positions and games.

This trio is currently the top stack in the Raybon Model for both DraftKings and FanDuel. They have the pleasure of facing a Chiefs defense that is a shell of its former self. After trading Marcus Peters to the Rams, the Chiefs are projected to have a bottom-five secondary to pair with a bottom-seven pass rush by Pro Football Focus. Eric Berry is still doubtful to make his 2018 debut (heel) in Week 2.

Unsurprisingly, Roethlisberger owns the second-highest ceiling projection in our Models, but the Chiefs’ tendency to play man coverage (46.3% in 2017) is the data point to focus on. Per Matt Harmon’s Reception Perception, Brown has cleared the 98th percentile in success rate versus man coverage in each of the last four seasons.

After factoring in his inevitable workload — volume is everything — Conner is still far too cheap on both sites in a plus matchup. Actually, “plus matchup” probably doesn’t do this spot for Conner enough justice; the Chiefs’ defense finished dead last against the run in 2017.

Be sure to keep an eye on the status of Roethlisberger, as he missed his second consecutive practice on Thursday.

I talked about this as a bounce-back spot for the Chargers’ defense in the Week 2 Defense and Special Teams Breakdown, and their 3.1 projected sacks (in our Models) is tied for the highest projection on this week’s slate. In limited preseason action, Josh Allen completed only 28.6% of his passes while under pressure. Still, Joey Bosa’s injury status (foot) is massive because the ability to pressure the quarterback is always key.

Gordon played on 76% of snaps last week, which isn’t fantastic for a running back of his stature. But his role remains one of the most voluminous in the league. Buffalo ranked 30th and 12th last year in Football Outsiders’ rush and pass DVOA, respectively, so Gordon’s role at the goal line is even more enticing in a game in which the Chargers are 7-point road favorites as of writing (see live data here).

The New England “take your best weapon away” defense held Hopkins to nine catches and 95 receiving yards, but he still finished with the fourth-most air yards in Week 1. He owns the seventh-highest individual WR/CB matchup on the slate, according to Pro Football Focus, running the majority of his routes against Malcolm Butler.

With a ton of ownership at the high end of the salary scale skewing toward AB, it makes sense that Hopkins owns the fifth-highest leverage score in our Models.

There are a few reasons to be bullish on Watson bouncing back from a subpar performance in Week 1:

Davis yielded a 0.81 Weighted Opportunity Rating (WOPR) — a volume metric that combines targets share and share of team air yards — the eighth-highest of any wide receiver in Week 1. He’s a solid natural price pivot off more popular options like Kenny Golladay ($4,800) and Devin Funchess ($4,700) on DraftKings, or Cooper Kupp ($6,300) and Chris Godwin ($6,100) on FanDuel. 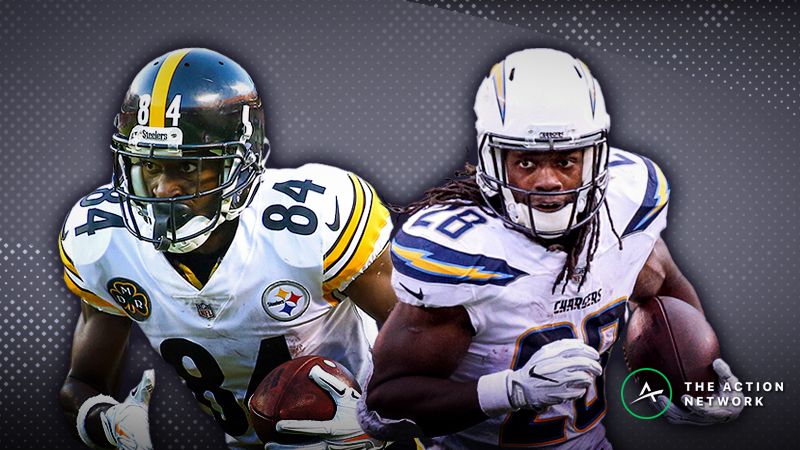 Game stacks are probably under-utilized in tournaments, and this game sets up to be high paced. The Lions and 49ers sport the fifth- and 12-most projected offensive plays in Week 12, respectively, per our Trends tool. The 48 over/under is also the third-highest of the slate.

The 49ers can be beaten deep, so it sets up well for both Golladay and Jones as high-upside plays if the public overreacts to Stafford’s four interceptions in Week 1.

Stafford will be just fine, and he should once again be forced into a lot of pass attempts. The Lions’ 77.6% pass play percentage trailed only the Saints (78.0%) in Week 1, and the 49ers are currently 6-point home favorites. Everyone wants to talk about how Alex Smith was the most efficient deep ball thrower in the league last year, but Stafford was right there at No. 2 (127.2 passer rating per Next Gen Stats).

At the tight end position, Kittle trailed only Jared Cook in WOPR last week. It’s a strong matchup against a Detroit team that ranked 26th in DVOA versus the position in 2017, and Darius Slay should remain occupied with a combination of a banged-up Marquise Goodwin and Pierre Garcon. Kittle is extremely underpriced on DraftKings with the second-highest projected Plus/Minus at the position.