This is the first article in a series looking at Jack Schwager’s classic investment books. The goal is to study interviews with famous traders and apply their wisdom to daily fantasy sports.

Michael Marcus is the first trader featured in Jack Schwager’s investment classic Market Wizards. He is a commodities trader who reportedly turned an initial investment of $30,000 into an astounding $80 million. With that experience in growing a bankroll, he might have applicable insight to growing a DFS account.

During his interview with Schwager, Marcus discusses the importance of focusing your efforts, thinking differently from the crowd, practicing your craft, avoiding the influence of others, and being aware of the emotions that impact markets. Studying the wisdom of a market wizard can add an edge to our DFS game.

Let’s see what wisdom we can garner from this interview with a market wizard.

Focus on the Best Slates

I knew that I should only be in those optimum trades, but trading was a release and hobby for me. It replaced a lot of other things in my life. I placed the fun of the action ahead of my own criteria. However, the thing that saved me was that when a trade met all my criteria, I would enter five to six times the position size I was doing on the other trades.

Many people fail to make money consistently at DFS because the game is so much fun to play. We often don’t think rationally about whether a particular slate is worth playing. Marcus struggled with the thrill of the game in much the same way that many do when deciding to play in a three-game slate just because they want something to watch on a random Thursday night.

Marcus was able to overcome the losses from suboptimal trades by ramping up his position on the trades he knew were much better bets. In DFS, we can do something similar (though in reverse) by scaling back our action on the random short slates that we don’t feel good about and probably shouldn’t play in the first place. This allows us to focus most of our bankroll on the best slates and to avoid losing that bankroll on the slates in which we have much less of an edge.

I like to use the filters function inside my FantasyLabs models as a rough way to estimate the quality of a particular slate:

If I set my filters to include only players with ratings of 70 or higher and there aren’t enough options to fill out a lineup, it’s a good bet that the slate is going to be shaky. Sometimes I relax the filter to allow anyone rated above a 50, but I also prepare for the slate to carry more variance than I would prefer.

Now you almost have to be contrary. You have to ask, “Isn’t it true that all my fellow professional traders are already in, so who is left to buy?” You didn’t have to worry about that before, because there was always somebody left to buy — the people who were getting the information or reacting slower. Now, everybody is just as decisive, just as fast.

If I didn’t know better, I would actually think that Marcus was talking about DFS here. Years ago, anyone with decent projections could put together lineups that made money consistently. As the industry has evolved, information has become available to the point where even the best information is not much of an advantage.

Finding an edge over the field today is difficult. You have to assume that everyone you compete against has reasonably accurate information. Then you have to base your decisions on what you expect other players to do with that information. Being a contrarian, at least to some degree, used to be an alternative strategy. Today, contrarianism is absolutely essential.

Since so much of contrarianism is about understanding ownership in guaranteed prize pools, learning about ownership is paramount. The best way to do that is to review the results of various contests, which can be done easily with our new DFS Ownership Dashboard: 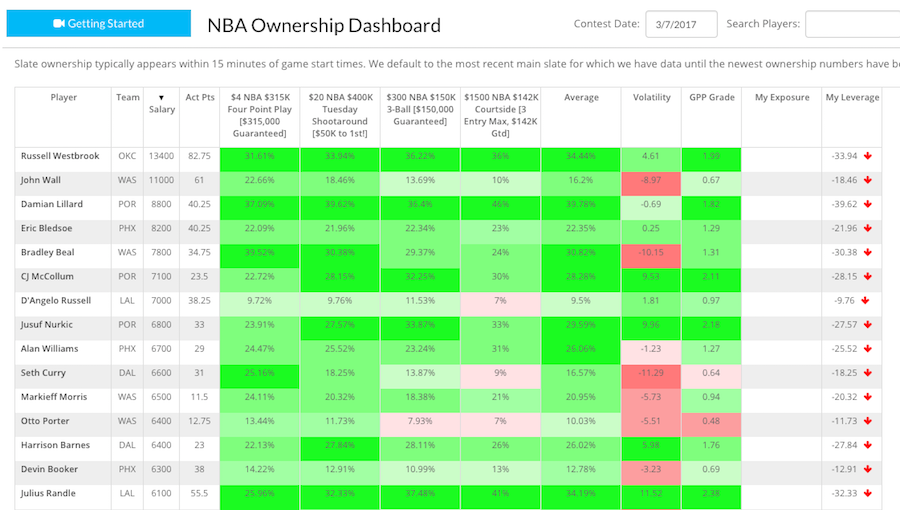 In addition to giving us expected information like ownership percentages for various tournaments, the dashboard also shows Volatility Ratings and GPP Grades.

I have been particularly fascinated with the Volatility Rating metric, which measures the difference in ownership between low- and high-stakes tournaments. Since the expensive GPPs tend to be filled with pros, it is likely that players are sharper options when they have higher ownership in these tournaments than lower-priced tournaments.

For more information on how to use this tool, see the introduction to the DFS Ownership Dashboard by Jonathan Bales.

I think to be in the upper echelon of successful traders requires an innate skill, a gift. It’s just like being a great violinist. But to be a competent trader and make money is a skill you can learn.

I began my DFS career expecting to be a prodigy who would take down massive GPPs regularly. Things did not work out as planned. However, through hard work, lots of practice, and the ruthless study of my mistakes, I have learned how to play in a way that returns consistent profits.

Like stock trading, DFS requires special talent to be played at an elite level. But just because you aren’t Peter Jennings (CSURAM88) doesn’t mean that you can’t become a profitable player. It just takes hard work and lots of studying.

One of the best ways to learn how successful DFS players think is to study their lineups. I like to do this by taking a head-to-head contest against CSURAM88 in every slate I play. I then study every detail of his lineup and reverse engineer his method of constructing the lineup using the CSURAM88 Model:

The more I study experts like Peter, the more I understand their thinking. I might never be CSURAM88, but by studying him I might eventually learn to emulate him with more skill.

I think the leading cause of financial disablement is the belief that you can rely on the experts to help you. It might, if you know the right expert. For example, if you happen to be Paul Tudor Jones’ barber, and he is talking about the market, it might not be a bad idea to listen. Typically, however, these so-called “experts” are not traders. Your average broker couldn’t be a trader in a million years. More money is lost listening to brokers than any other way. Trading requires an intense personal involvement. You have to do your own homework, and that is what I advise people to do.

Listening to those so-called ‘experts’ can lead to disaster in the stock market. It is also the fastest way to lose your bankroll in the DFS world. Just because people have articles or video podcasts on popular websites or strong opinions on Twitter does not mean that they actually know how to play DFS.

That’s why a lot of the focus at Labs is on teaching people how to use the tools. This allows you to do your own research and form your own opinions. Just as it is in the stock market, research in DFS is required.

Doing your own homework can be a daunting task at first, but with the Trends tool you can easily test the value of your ideas. One of my go-to trends for initial research is this simple example:

It identifies players in high-scoring games who are comparable to players who have paid off their salaries in the past with positive Plus/Minus values. After building up my trend database, I’ve found that trends similar to this one have helped me focus on the best options for particular slates.

Understand the Game You are Playing

I really feel that if you can trade one market, you can trade them all. The principles are the same. Trading is emotion. It is mass psychology, greed, and fear. It is all the same in every situation.

The emotions Marcus talks about show up constantly in the DFS community. We follow the crowds toward the highest projected Vegas totals. People get greedy expecting huge games from the overpriced studs. They fear the prospect of getting zero points from a value play.

Understanding how emotional factors impact the DFS market is vital. If you want to be successful, take time to understand how your emotions impact your decisions as well as the decisions of the people against whom you compete.

If you do that, you will have a significant mental edge over a majority of the field, an edge that can be made all the sharper with the Labs tools and one day maybe help you become a DFS Market Wizard.

What Does It Mean to Be a Daily Fantasy Sports Contrarian?