How to Use Save Prediction in NHL DFS to Select Goalies

“What NHL Metrics Should I Prioritize in my Models and Goalie Selection?”

This is probably the most important question to answer if you are new to DFS hockey. The impetus for this entire series comes from Jonathan Bales’ books. This week, it’s time to pivot back to the goalie position.

Wins are weighted significantly in both DraftKings & FanDuel scoring, so it can be frustrating to construct a great lineup only to see an underperforming goalie hold it back. Is it possible to find more consistency at this variance-filled position by rostering goalies likely to accumulate a larger number of saves?

Baseline Trend and Save Prediction Percentage

Naturally, using Vegas moneylines can be a great place to start in goalie selection, but it’s possible that our proprietary Save Prediction metric could also provide an edge. Save Prediction takes into account a multitude of factors, such as the opposing team’s average shots, the team’s average shots allowed, and the player’s goals against average.

Using our Trends tool, we can compare the Plus/Minus values to both Consistency Ratings and ownership percemtages.

Plus/Minus: A player’s actual points minus his expected points in the context of his salary-based expectations. Note that DFS scoring is typically lower for NHL than other sports like NFL or NBA, so the NHL Plus/Minus values we see are likely to be small.

Let’s compare how goalies typically perform in both the top and bottom half of the Save Prediction percentiles:

From a macro perspective, being in the top half doesn’t change much, so there’s not much here yet.

The following charts highlight goalies using different percentile buckets for our Save Prediction metric. More importantly, the impact on Plus/Minus in comparison to both Consistency and Ownership is where the true value lies in these charts.

This may be the most fascinating Metric Lab chart to date. There’s a ton to unpack, but let’s start here.

Intuitively, it seems that it could be most useful to analyze Save Prediction when a goalie is expected to see a large number of shots (saves). There appears to be an opportunity to target a Consistency spike in the top 5 percent bucket, but be wary of the risks involved in the top 1 percent bucket.

Ownership — and in many cases Consistency — still tends to much more closely mirror Vegas moneylines.

In tournaments, there could be an edge in targeting goalies in the top 5 percent of Save Prediction, especially if it allows you to pivot off the chalk moneyline goaltender of the night.

Let’s dive deeper into how Save Prediction impacts goaltenders at different price points.

Does paying up for a goaltender — even one who’s expected to accrue a large number of saves — give you a false sense of security? It’s important to remember that with an elite goalie you may have a tougher time jamming in a top-tier shooter or even an offensive defenseman. 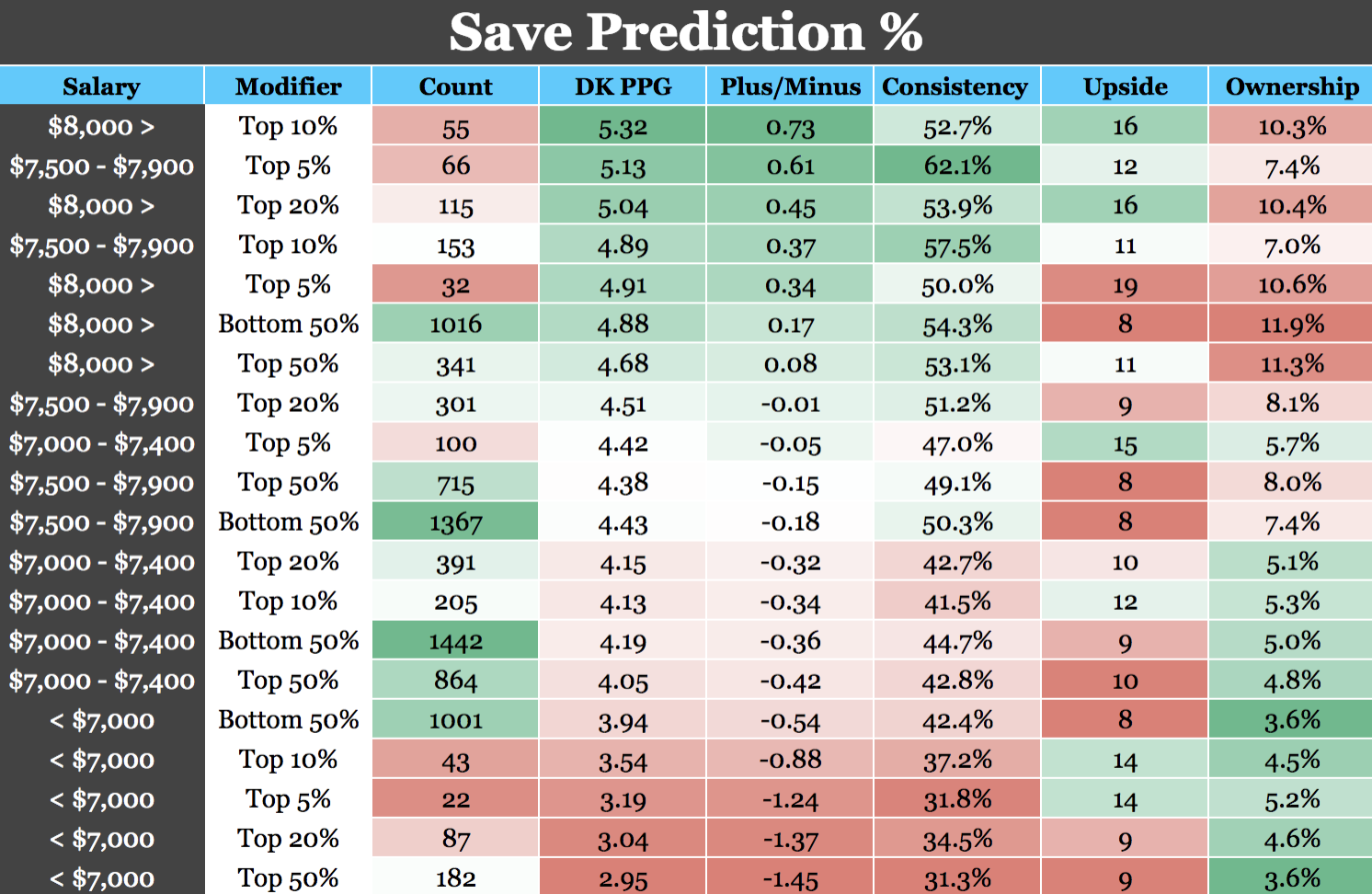 The top performers actually seem to be driven more by salary buckets than Save Prediction buckets. Let’s filter by salary to further visualize the same data. 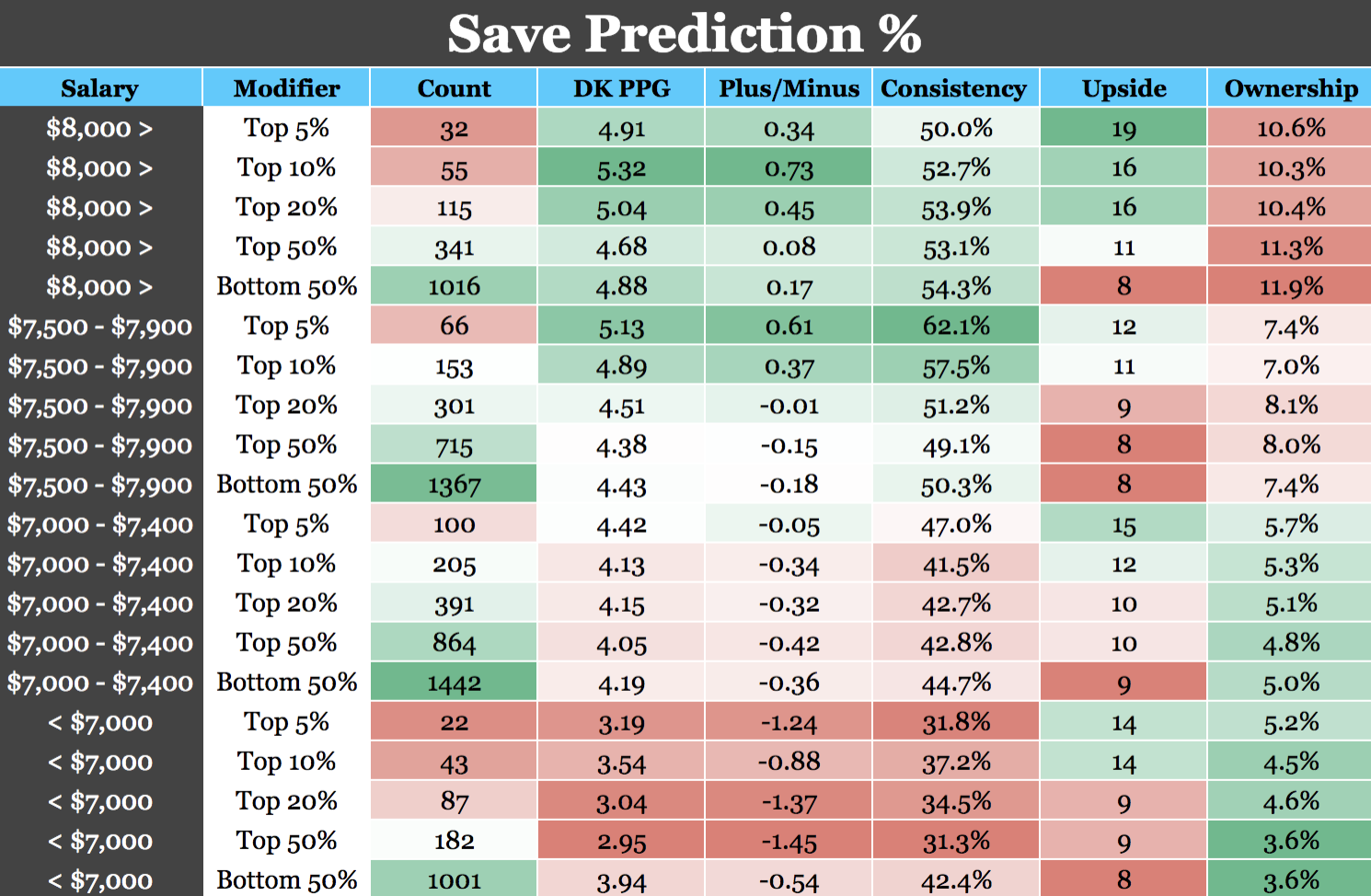 Unsurprisingly, the strongest combination of Plus/Minus and Consistency lies with goaltenders priced above $7,500 on DraftKings who are expected to accumulate a lot of saves. Henrik Lundqvist is a great example. Hank’s price suggests that he is a top-tier talent, but the Rangers repeatedly allow a ton of shots attempts, the perfect combination for a strong Save Prediction.

The only goaltenders who performed above their salary-based expectations in the bottom 50 percentile were those priced at $8,000 and above. This makes a certain amount of sense, given that the most talented goaltenders — or at the least those on the strongest teams — should be the most expensive. Those factors likely outweigh the increase in floor/ceiling that comes from accumulating saves.

Across the board, goaltenders priced below $7,000 on DraftKings have performed well below our baseline trend, but there is decent upside in the top 10 percent and above at very low ownership.