The MLB Ownership Review is a regular series in which we review the ownership dynamics of a previous slate.

On Tuesday, May 30, the 14-game main slate featured Chris Sale, Justin Verlander, Luis Severino, and Robbie Ray, all of whom (except for Ray) were at least $10,000 on DraftKings.

Per our Lineups page, the Red Sox game had a 40 percent chance of rain, but that didn’t sway players from rostering Sale. Sadly, he finished the night with 12.05 DraftKings points.

Sale dominated ownership yet again, especially in the high-stakes games with a 53 percent ownership rate in the Gold Glove. The following ownership data is from our DFS Ownership Dashboard, which Pro Subscribers can review shortly after lineup lock: 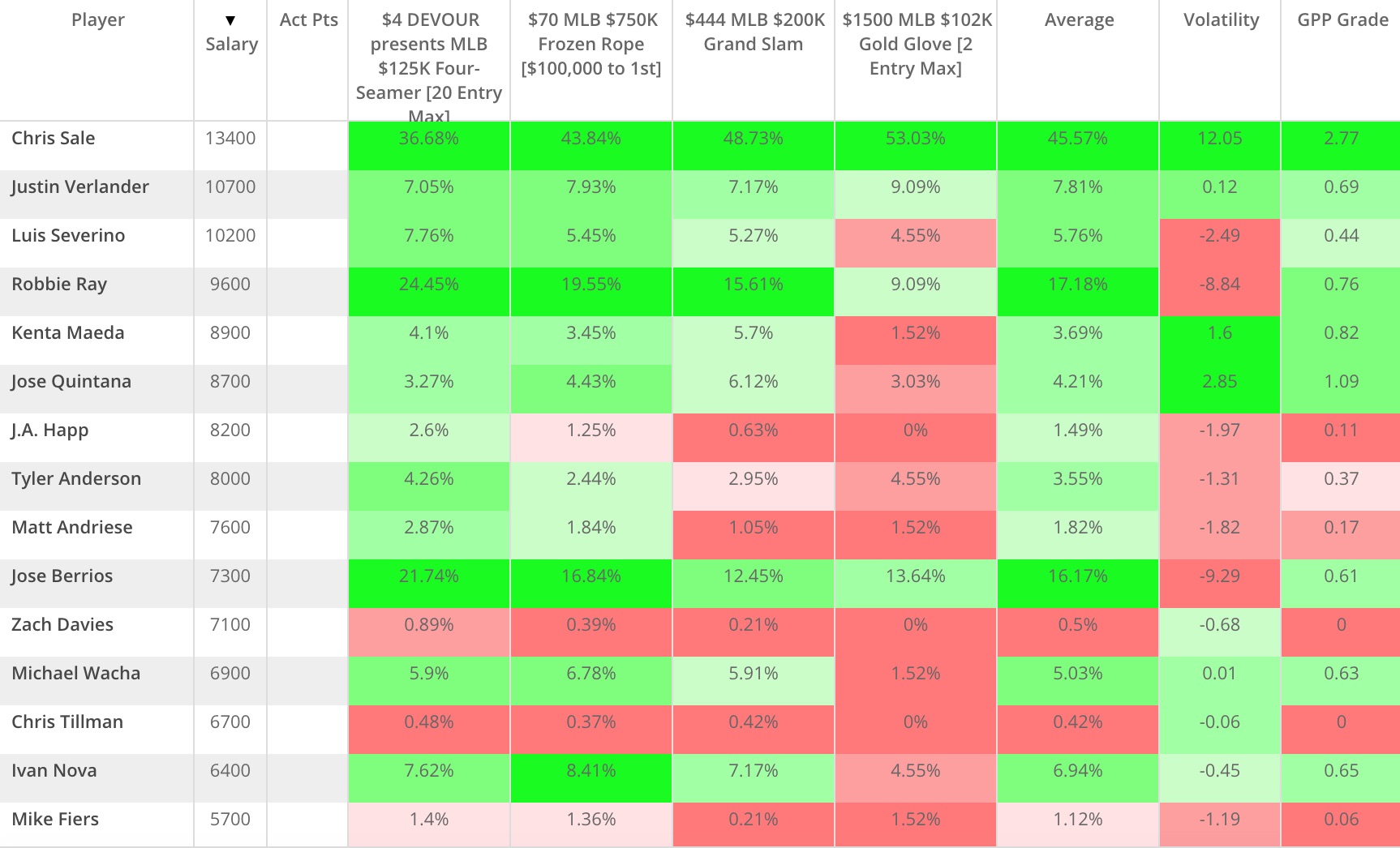 For the fifth time this season, Sale was priced above $13,000 on DraftKings, where he had a +9.95 DraftKings Plus/Minus and a 90 percent Consistency Rating entering the game. Given that (per our Trends tool) Sale had a 57.6 percent ownership rate in large-field guaranteed prize pools before the slate, DFS players could’ve anticipated that they had potential to gain tremendous leverage on the field by fading Sale and his massive ownership.

Many of the players who pivoted away from Sale likely pivoted to Ray (who led the slate with an 8.8 K Prediction), as he had the third-highest average ownership among pitchers at 17.18 percent. He was especially popular in the $4 DEVOUR with a 24.45 percent ownership rate. The Diamondbacks were underdogs, and DFS players typical dislike underdog pitchers — but they have historically done well at low ownership when in possession of K Predictions comparable to Ray’s:

Ray finished with 46.85 DraftKings points against the Pirates.

Five teams on the slate had implied totals of more than 5.0 runs, which likely impacted ownership: 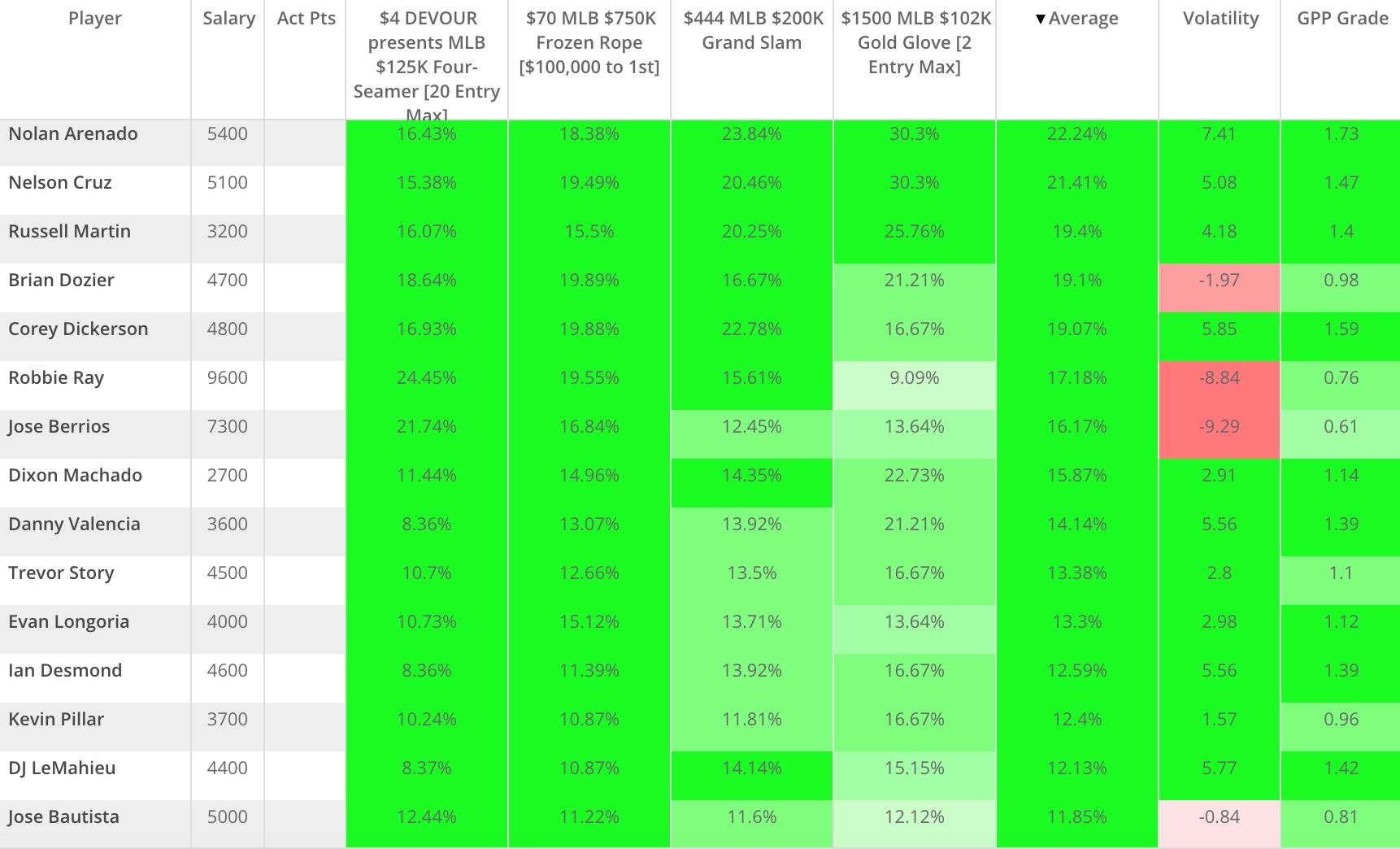 Nolan Arenado and Nelson Cruz were tied for the highest ownership in the $102k Gold Glove at 30.3 percent. Unfortunately, Cruz walked once before leaving with an injury, and Arenado finished the night 0-4. Even with the expensive Sale on the mound, DFS players were able to sprinkle in Coors Field exposure.

It’s a risk/reward approach, but fading certain Coors hitters can have its advantages, especially if you’re aware they’re going to be very chalky. For example, if you wanted Coors exposure but didn’t want to pay the premium for Arenado, Kyle Seager was $1,400 less and had average ownership of 3.7 percent. Seager had exceptional Statcast data heading into this game, and he was sporting a Recent Batted Ball Luck score of 60, which would indicate some positive regression could be headed his way — he finished the night with 32 DraftKings points.

Despite having an implied run total of 4.9 runs, the Yankees were massively under-owned on Tuesday’s slate. All of the Yankee hitters in the 1-5 spots in the order had an average ownership between 1.25 and 7.22 percent; they combined for 87 DraftKings points. Of the 13 highest-owned batters, 11 of them came from teams with implied run totals over 5.0.

Moving forward, be sure to use the FantasyLabs Tools to monitor the ownership patterns of slates with high-priced aces and several teams with high-implied run totals.

Carpenter at the Top, Coors Light, Alex Wood: MLB Trends of the Week (7/7)