The MLB Ownership Review is a regular series (out on Fridays) in which review in depth the ownership dynamics of one slate from the previous week.

On Monday, May 8, the main slate consisted of 10 games headlined by the Cubs-Rockies affair at Coors Field. The Cubs and Rockies were implied to score 5.7 and 4.9 runs, giving the matchup the slate’s highest total (which we displayed on our Vegas Dashboard). There was just one problem: Weather.

The other nine games on the slate had a zero percent chance of rain. The weather in Colorado was the only red flag on the slate: 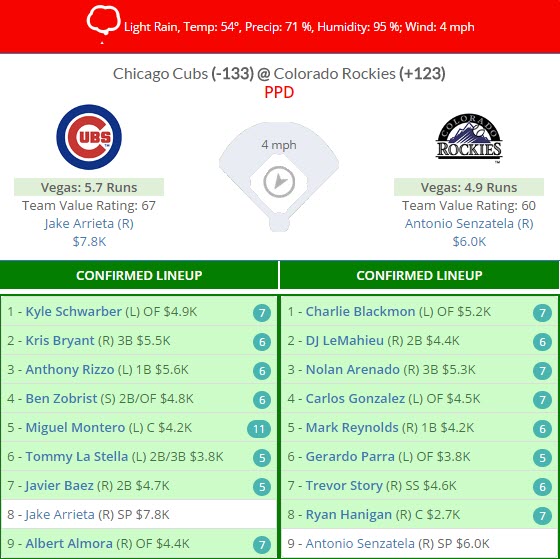 You can view projected and confirmed lineups as well as general weather information on our Lineups page. That 71 percent chance of precipitation resulted in a storm that produced candy-sized hail:

The game was delayed shortly after lineups locked and eventually postponed. On a slate with perfect weather everywhere except for the one place with the most potential for scoring, how did the ownership distribution shake out?

Hitter ownership from the Cubs-Rockies matchup was mostly low except for a few batters at the top of the order. The following ownership data is from our DFS Ownership Dashboard (where Pro subscribers can review ownership trends across guaranteed prize pools of all stakes):

Hitter ownership was far below what we’re used to seeing at Coors Field — especially for the Cubs studs. Per our Trends tool, Kris Bryant and Anthony Rizzo have posted average ownership rates of 28.6 and 18.2 percent at Coors Field since the beginning of last season.

The ownership for the game’s pitchers, Jake Arrieta and Antonio Senzatela, is easier to understand:

Both pitchers had lower ownership as the stakes increased. As we found out in our MLB Weather Factors piece, pitchers have historically averaged a -1.45 Plus/Minus on DraftKings with precipitation odds between 61 and 80 percent. Rain delays don’t always result in postponement, but pitchers are often pulled after delays, which makes them much riskier plays in poor weather conditions compared to hitters. For this slate, the sharp move was to fade Arrieta and Senzatela.

Given the wealth of games with good weather, the public by and large faded the Cubs-Rockies matchup on 5/8. Here are some specifics:

Moving forward, be sure to use the FantasyLabs Tools to monitor the ownership patterns of slates with poor weather conditions in games with potentially high scores.

How Popular is Stacking in Daily Fantasy MLB Tournaments?

Do MLB Park Factors Change Throughout the Season?