Using all of that data — specifically the data points in our PGA Models — we can see which metrics have been the most valuable for the St. Jude Invitational and then use that data to optimize a model for this week.

To build this “optimal” model, I backtested all the metrics in our Trends tool and looked at which ones have best predicted performance. For example, golfers in the top 10 percent in Long-Term Adjusted Round Score have historically outperformed expectations by over five fantasy points. Using data for the highest-rated metrics, I compiled weights for a model. The metrics listed below are those that tested 3.0 fantasy points above expectations. 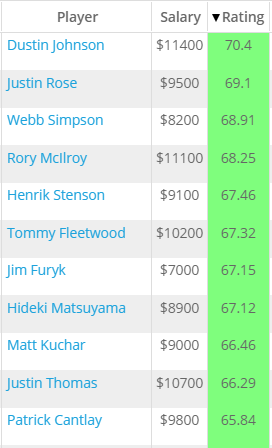 Note: The ratings above will change, as data will import from this past week’s tournaments and sportsbooks release top-10 odds later in the week. Make sure to build this model and check back later for true ratings.

The most important factor in model building this week is to understand the uncertainty around this event. Last year, it was just the FedEx St. Jude Classic, but starting this year it’s a WGC (World Golf Championships) event, meaning it has greater prestige and a bigger purse. As a result, the field is stronger than usual.

Further, last season the event took place in the first week of June. It followed the Memorial Tournament, which followed the Fort Worth Invitational and AT&T Byron Nelson. It was the week before the U.S. Open. This season it’s obviously the week following the Open Championship in Northern Ireland, so golfers will have to make the long flight to Memphis, Tennessee, on a very short turnaround. The course is the same, but the circumstances certainly are not.

The difference in the calendar could make a ton of difference in modeling. There’s data that shows that players who play the John Deere as opposed to the Scottish Open (the tournaments before the Open Championship) historically do worse, as the long travel really matters. This is a new situation, but I’d expect that to be the case this week as well. Further, the data from last week is from a tough course with incredibly windy conditions; a player may look way worse in Recent Greens in Regulation, for example, than they should because they had a tough weather draw.

Thankfully, the model results don’t really feature many recent stats — just Recent Field Score, which measures how strong a field has been in a golfer’s last few tournaments. Otherwise, the historical data suggests that we should lean on long-term play, especially Adjusted Round Score and par-3 and par-4 scoring.

But again, modeling this tournament is especially tough. Rather than focus on optimizing a model or getting too focused in on specific golfers or course fits, I would suggest playing odds and find players who are likely undervalued in DFS tournaments. To sum it up: Given the uncertainty this week, it could really pay off to be contrarian.