The NFL offseason has reached it’s latest milestone thanks to the league’s decision to release the full 2019-20 regular season schedule.

While this new information allows fans to begin planning their tailgates, the true beneficiaries are fantasy football players: We can finally start estimating which teams and position groups might have an especially easy beginning, middle and end of the season.

Let’s start by looking at what the 2019 schedule means for the various defenses. 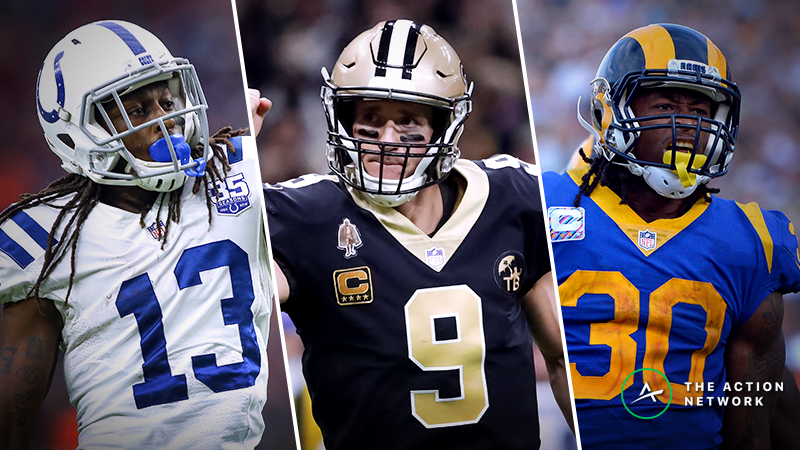 Of course, next season’s defenses won’t exactly resemble what fans saw during the 2018-19 season.

And the NFL has eliminated blindside blocks. Specifically, a blindside block “is a foul if a player initiates a block in which he is moving toward or parallel to his own end line and makes forcible contact to his opponent with his helmet, forearm, or shoulder.”

This rule could theoretically lead to better defensive performance thanks to the defender’s easier path to tracking down ball carries.

Several teams made defensive splash signings that could change their unit’s outlook next season.

Keep in mind that certain defenses have historically thrived inside the friendly confines of their own stadiums, so it’ll be important to consider home/away splits in addition to matchups throughout the season.

Best defenses at home in the NFL over the past five seasons:

With all that in mind we can now take a look at the easiest and hardest schedules for each position group to identify potential early-season targets as well as waiver wire adds who could blow up in the playoffs.

The following charts feature each team’s respective remaining opponents’ rank in fantasy points allowed (DraftKings scoring) to that position per game during the 2018 season.

Dak Prescott in particular is an intriguing fantasy option in 2019, as he’s demonstrated high-level consistency thanks to his elite rushing ability in the Cowboys’ ever-evolving passing offense.

Only three players have been a top-10 fantasy quarterback in each of the past three seasons:

Carson Wentz, Jameis Winston, Lamar Jackson and Russell Wilson are also set up fairly well during the first month of the season, while Matt Ryan, Aaron Rodgers and Ryan Fitzpatrick stand out as the quarterbacks with the toughest opening stretch.

The middle of the season (Weeks 5-13) shapes up a bit differently. Overall, the Cardinals eventual starting quarterback (Kyler Murray?) as well as Nick Foles in Jacksonville, Cam Newton, Drew Brees and Matt Ryan look like the league’s best bets to find themselves in plus matchups during October and November.

We have a while till the fantasy playoffs roll around, but Andrew Luck, Jimmy GQ, Fitzpatrick, Manning’s body, Marcus Mariota and Andy Dalton appear to have the most advantageous schedules for Weeks 14-16.

But Derek Carr, Aaron Rodgers and Mahomes have the toughest schedules for the fantasy playoffs. Again, this probably isn’t anything to worry about for Mahomes or Rodgers. Also, it seems unlikely that fantasy teams built around Carr will have much to worry about in December.

Derek Carr's career stats and ranks among this group …

Running backs with the best opening season schedule include Mark Ingram with the Ravens, Kerryon Johnson and the rest of the Lions backs, Tevin Coleman and company in San Francisco, James Conner, the Bills’ elderly backfield and generational talent Saquon Barkley.

Meanwhile, Damien Williams, Lamar Miller, Philip Lindsay and Royce Freeman along with Nick Chubb could have a tough time getting things going during their respective tough September schedules.

Nobody has too brutal of a mid-season schedule at running back, although it looks like Barkley, Marlon Mack, Joe Mixon and the Lions backs could have the toughest paths to fantasy glory in October and November.

The Patriots easily boast the league’s friendliest fantasy playoff schedule with cozy matchups against the Chiefs, Bengals and Bills — three of the league’s bottom-eight defenses against fantasy running backs in 2018.

The Steelers and Ravens stand above the rest of the league in terms of how friendly their schedules are for their running backs. Both Conner and Ingram appear to be on their way to securing three-down roles for the 2019 season.

The Falcons, Dolphins and Bengals are the only three defenses to rank among the league’s bottom-eight units in fantasy points allowed to running backs over the past five seasons (in point-per-reception scoring).

The Rams, Vikings, Eagles and 49ers stand out as the offenses with the best wide receiver matchups in September. It’ll be particularly interesting to see how much better the Eagles will be with elite field-stretcher DeSean Jackson added to the fold.

QB yards per attempt with vs. without DeSean Jackson #SpeedKills

The Raiders, Chargers, Dolphins and Chiefs have the toughest opening stretch of games when it comes to facing elite secondaries. Mahomes and company shouldn’t be doubted, but September matchups against the Jaguars, Raiders (lol), Ravens and Lions (meh) shouldn’t be completely scoffed at.

Wide receivers poised to thrive in Weeks 5-13 include those on the Panthers, Cardinals, Falcons, Saints and Buccaneers. It remains to be seen what Arizona will look like in Kliff Kingsbury’s pass-happy Air Raid offense, but there might be enough targets to allow both Larry Fitzgerald and Christian Kirk to thrive.

People forget Christian Kirk showed he can play on the outside as a rookie and looked pretty #good in a #bad offensive situation pic.twitter.com/tSxoTFQLCv

For Weeks 5-13, the Chiefs again have an unfortunate string of matchups for their wide receivers. Other offenses with fantasy-unfriendly wide receiver matchups in October and November include the Titans, Steelers, Texans and Broncos.

T.Y. Hilton and the Colts receivers easily have the best potential stretch run for the fantasy playoffs with matchups against the Buccaneers, Saints and Panthers in Weeks 14-16. Wide receivers for the 49ers, Cowboys, Redskins, Giants and Texans also are set up particularly well in December.

On the other hand, the Browns, Raiders, Buccaneers and Chargers stand out as offenses that could have a rough time passing the ball in the winter.

The Eagles, Buccaneers and Saints are the only three defenses among the league’s bottom-eight units in PPR points allowed to wide receivers over the past five seasons.

With tight ends, there’s more disparity in workload within the position relative to other skill players, so their strengths of schedule aren’t as impactful. Still, George Kittle, Hunter Henry, Jared Cook (now on the Saints) and Delanie Walker appear to be set up well for a strong September. The Raiders and Jaguars also boast plus matchups for their tight ends (whoever they may be).

The Packers, Eagles, Patriots and Bengals aren’t so lucky: They have the least fantasy-friendly schedules at the tight end position in Weeks 1-4.

The Steelers, Texans, Colts, Ravens, Packers and Titans boast the best midseason schedule for tight ends. Vance McDonald in Pittsburgh is particularly intriguing, given the targets that have been freed up in the offense with the departure of wide receiver Antonio Brown.

Tight ends from the Giants, Eagles, Panthers, Cowboys and Buccaneers have the toughest matchups in October and November. Zach Ertz will probably get enough volume to overcome his schedule, although the addition of D-Jax and an increased workload for second-year tight end Dallas Goedert could feasibly lead to reduced target share for Ertz in 2019.

The Broncos, Buccaneers, Bears, Patriots and Bengals stand out as the offenses with the most fantasy-friendly December schedules for their tight ends. The opposite is true for the Redskins, Packers, Giants, Ravens and Steelers.

The Colts, Giants and Raiders are the only three defenses among the league’s bottom-eight units in PPR points allowed to tight ends over the past five seasons.

The Action Network NFL Podcast: The AAF Is Dead, Long Live the AAF