Mears: Building an Optimal DFS Model for the 2019 British Open

Using all of that data — specifically the data points in our PGA Models — we can see which metrics have been the most valuable for the British Open and then use that data to optimize a model for this week.

Building an Optimal DFS Model for the 2019 British Open

To build this “optimal” model, I backtested all the metrics in our Trends tool and looked at which ones have best predicted performance. For example, golfers in the top 10 percent in Recent Adjusted Round Score have historically outperformed expectations by over 10 fantasy points. Using data for the highest-rated metrics, I compiled weights for a model. The metrics listed below are those that tested 4.0 fantasy points above expectations. 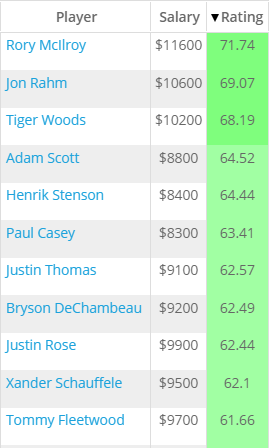 Note: The ratings above will change, as data will import from this past week’s tournaments and sportsbooks release top-10 odds later in the week. Make sure to build this model and check back Tuesday for true ratings.

First, it’s important to note I’m building this model based on overall British Open past data. Royal Portrush, the site of this week’s event, hasn’t hosted the Open since 1951, and while it did host the Irish Open in 2012, I don’t think that data is useful this week given how long ago it was, especially since the course wasn’t set up for a major. I’d ignore that data altogether, but if you want to use it, it might be best if used anecdotally and not as part of a model.

Overall, the metric in our models most predictive of British Open success has been top-10 odds. The golfers in the top 10 percent have historically outperformed their expected fantasy points by nearly 14 points, which is really impressive considering those guys are already going to be the most-expensive golfers and have the highest expectations. “Odds Score” — a player’s odds to win the tournament — has also been a predictive metric of British success.

Below those we get Pro Trends Rating, Recent Driving Accuracy, Long-Term Field Score and Long-Term Birdies. Interestingly, the most predictive metrics haven’t necessarily been ones hyper-specific to links-style, accuracy courses. Driving Accuracy and Recent Greens in Regulation show those are important, but they’re smaller parts of the model than Adjusted Round Score or top-10 odds to win.

It’s also important to note which metrics have been negatively correlated with success. The No. 1 this week is Par-3 scoring. Golfers in the top 10 in that metric have underperformed expectations by 5.4 fantasy points. Other metrics with negative correlation include Recent Putts Per Round, Long-Term Bogies, Long-Term Missed Cuts and Putts Per Round Differential. That doesn’t mean putting is unimportant. Rather, it means golfers coming in with a hot putter are potentially overvalued.

And one final note: The British is a unique tournament, and weather can often come into play. My colleague Jason Sobel recently wrote about the top-10 links players, and some of those guys, Marc Leishman for example, are on the list because they have low ball flights and thus can deal with windy conditions better. That’s not something you can build into these models, so I would use the models as a baseline and then do secondary research on guys who typically do better or worse in the weather conditions we’re expecting to see in Ireland this week.