In this piece, I highlight tight ends who stand out in our large suite of analytical fantasy tools, most specifically, our FantasyLabs Player Models. While the models are built for DFS contests, this is an all-purpose fantasy article with actionable information for all formats.

As news breaks throughout the week and we adjust our projections, player ratings in our Player Models will change. For updates, visit the models directly.

Here’s where they place within our Week 2 Fantasy Rankings (as of Wednesday evening):

We’ll discuss why these five are popping in our models, as well as take a look at some other tight ends who represent good value.

Higbee leads four out of our five Pro Models on DraftKings and shows up on two FanDuel models. Higbee is a beneficiary of playing in the Sunday night game last week after Week 2 salaries were released.

Since DFS sites typically release the following week’s salaries before the Sunday and Monday night games, sometimes a player ends up grossly mispriced. Frequently this is due to an injury in front of them, but not in Higbee’s case. In this case, there was a lot of uncertainty surrounding his role heading into the season.

With new quarterback Matthew Stafford, and the departure of fellow tight end Gerald Everett, it was hard to know Higbee’s role. He matched or exceeded his highs from last season in both targets (6) and receiving yards (68) in a game in which Stafford threw the ball only 26 times. If that game had been played on Sunday afternoon, he’d likely be priced somewhere in the upper $4,000 range.

Since we rarely get something for free with DraftKings pricing, now is a great time to take advantage of Higbee. The game against the Colts will likely be closer than the 20-point rout of the Bears, meaning more Stafford dropbacks. The Colts also perform worse against tight ends than the bears, allowing an Opponent Plus/Minus of +1.4 (compared to +0.3 for the Bears).

Note: Opponent Plus/Minus is a proprietary FantasyLabs metric that measures how many points above or below salary-based expectations a defense allows.

Higbee projects as the best tight end in Pts/Sal on both sites, but the edge is bigger on DraftKings by a wide margin.

Waller is frequently Derek Carr’s first, last, and only read. His 19 targets on Monday led the league regardless of position, amounting to a whopping 34% target share. Carr struggled, particularly in the first half, leading to a not-great 53% catch rate. Even so, I’d rather have 53% of Waller’s targets than 100% of almost any other tight end in the league.

Look for Carr to continue to lock in on Waller in Week 2. The Raiders take on a Steelers team that should have no problem limiting the ground game. The Raiders have the worst offensive line rushing matchup of the week. I doubt this game is as high flying as Week 1, so 56 Carr dropbacks are unlikely to happen again, but Waller is arguably the only above average option in this Raiders’ passing attack. He’s also the best player Jon Gruden ever coached.

With Travis Kelce off the main slate this week, Waller is rightfully the most expensive tight end on both sites. He’s also the highest projected across our Ceiling, Median, and Floor Projections. He’s a better play on FanDuel, where his Projected Plus/Minus is almost three points better than on DraftKings.

Continuing his run of unbelievable efficiency, Kittle converted only five targets into 78 receiving yards last week. His 6.2 yards after the catch per reception led the league (among tight ends) last season and was by far the lowest of his career. He also led all tight ends in yards per target at 10.1. The point is, nobody does more with his limited opportunities than Kittle.

He has otherwordly blocking ability:

That actually works against him, as he’s used far more as a blocker than other tight ends of his caliber. Travis Kelce, as an example, ran 33% more routes per game than Kittle last season.

That said, he should be in line for the higher end of his range of outcomes this week. Philadelphia looks good offensively, and with Raheem Mostert out and Brandon Aiyuk working his way back to the lineup, Kittle has less competition for targets than usual.  It’s probably just noise, but the last time Kittle played the Eagles, he torched them for a 15/183/1 line that amounted to 43.1 DraftKings points.

Kittle is second in our Ceiling, Median, and Floor Projections, and with Kelce off the slate, I’d be looking to him in tournaments, especially if Waller comes in at higher ownership. He’s a better deal on FanDuel, where he holds a 98% Bargain Rating.

Everything I said about Pitts last week still holds true in Week 2. Most of the field walked away from his Week 1 fantasy performance disappointed in his 7.1-point effort, but some positive signs were there. He tied for the team lead in targets with eight and saw as many red-zone looks as anyone on the team. That may have been only one, but it was encouraging that they looked his way in limited chances.

Sure, the Falcons play-calling left something to be desired: 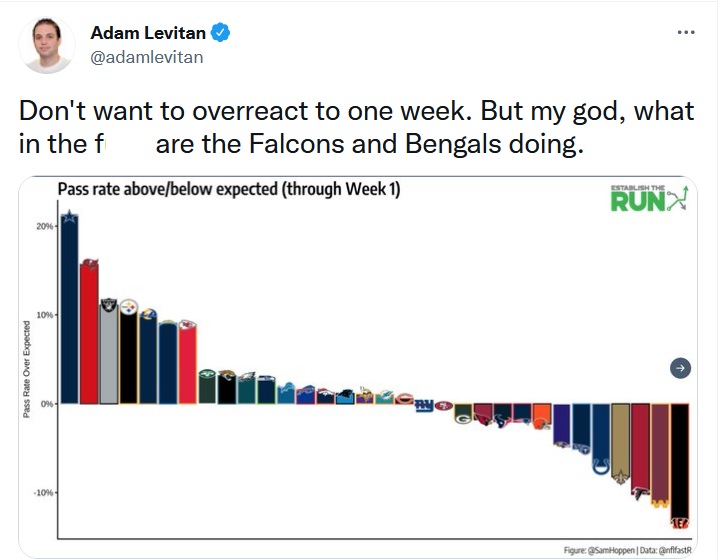 But I expect it to be better against a Tampa team that forces opponents to the air. Hopefully, this pays off for Pitts, who also has a week of NFL experience under his belt now.

Pitts is an interesting strategy decision this week. FanDuel bumped his price down from Week 1, but DraftKings moved it up $800. I personally think DraftKings heavily weighs last week’s ownership in their pricing algorithm. Plenty of casual players who got burned by Pitts will be unlikely to click his name again, especially at a markup. What if Pitts puts up the kind of score we were hoping for last week, except this time we get him as a semi-contrarian play? It’s certainly within the realm of possibilities.

Our models prefer Pitts on FanDuel, where he’s a better value this week.

Noah Fant is the only tight end other than Higbee to lead a DraftKings Model (the always contrarian Hodge Model). Fant and Higbee are the only tight ends above $4,000 with better Bargain Ratings on DraftKings. Fant led the Broncos in targets last week with eight, and there should be a few extras to go around with Jerry Jeudy injured.

The game environment isn’t ideal; the Broncos will likely be happy to control this one on the ground. Even so, they controlled most of Week 1 and still attempted 36 passes, which would be enough for Fant to pay off at his reasonable salary. The matchup is nice too: the Jags are second-worst on the slate in DraftKings Opponent Plus/Minus, at +2.9.

I like Fant as a pivot off the likely much more highly rostered Tyler Higbee, at a similar price on both sites. Higbee projects better, but with the volatility at tight end, it’s not exceptionally difficult to foresee a situation where Fant outperforms him.

As we saw last week, pivoting off the chalk tight end is a valuable way to be unique without giving up much in expected points.

While Pitts is getting all the attention, Hurst saw nearly as many snaps (43 for Hurst, 49 for Pitts) and caught as many balls as Pitts in Week 1. The Falcons seem committed to running a lot of 12 personnel (two tight ends), with both tight ends out snapping No. 3 wide receiver Olamide Zaccheaus (19 snaps). At least in this early stage in Pitts’s career, the gap between the two isn’t as big as most people think. Hurst could fairly easily find the endzone and finish ahead of Pitts in the box score this week.

A DraftKings only salary-saver, Trautman trails only Higbee in Projected Plus/Minus and Pts/Sal. He saw six targets on only 20 Jameis Winston dropbacks in Week 1, which led the team. He was also on the field for 54 of 60 offensive snaps. If the Saints take to the air more this week, Trautman will see far more volume than his $3,000 price tag would suggest.