Here’s where they place within our Week 14 fantasy football rankings (as of Thursday afternoon).

Of these seven tight ends, the two who stand out most to me are Kelce and Waller. The other guys I will highlight as needed in the section on players with week-winning upside.

Odds as of Thursday afternoon and via DraftKings Sportsbook, where you can get up to a $1,000 sign-up bonus today.

Last week, Kelce crossed the 1,000-yard threshold for the fifth time in his career, setting a new mark for NFL tight ends.

With just four games to play, Kelce trails wide receiver D.K. Metcalf by only five yards for the league lead in receiving.

No tight end has finished the season as the league’s leading receiver since at least the AFL-NFL merger in 1970, which is as far back as I am willing to research. I’m doubtful it has ever happened.

… and I bet that Mahomes will do everything in his power to get Kelce the targets he needs to win the receiving title.

And I mean that literally.

I have bet on it, and I just tracked it in The Action Network App.

Kelce is +550 at FanDuel to lead the league in receiving yardage.

Even though he’s now 31 years old, Kelce has been as dominant as ever this year.

Kelce is tied for No. 1 with Darren Waller among all tight ends with 15.1 expected fantasy points per game (per RotoViz NFL Player Statistical Summary).

Since quarterback Patrick Mahomes became the full-time starter in 2018, Kelce has been a fantasy TE1 in 86% of his regular-season games (per RotoViz NFL Stat Explorer). 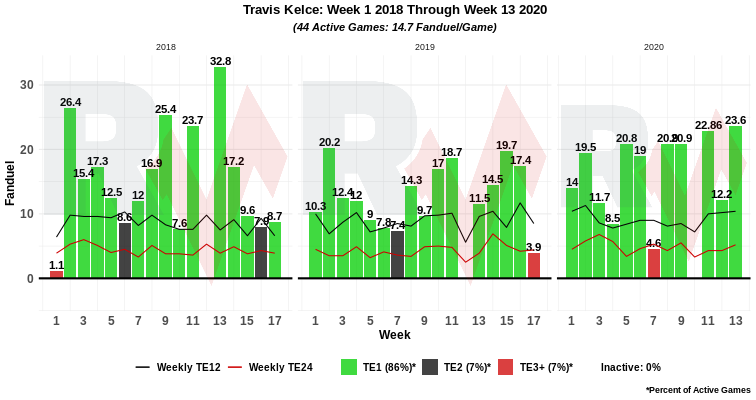 And Kelce isn’t just the leader in AirYAC at tight end. He’s one of the leaders for the entire league, and it’s hard for a tight end to approach the AirYAC numbers we see from wide receivers.

The Dolphins are a middle-of-the-road No. 13 with a -4.5% pass-defense DVOA against tight ends — but, really, what does that matter?

With Kelce, matchups are irrelevant.

From a macro perspective, there’s a lot to like about Kelce’s situation. Since head coach Andy Reid joined the franchise in 2013, the Chiefs have been the league’s most profitable road team, going 39-21-1 against the spread (ATS), good for a 27.9% return on investment (ROI, per our Bet Labs database).

Kelce is a weekly must-start top-two TE1 in season-long leagues and a strong pay-up option for cash games. He leads all tight ends in our Models with his median, ceiling and floor projections.

Kelce is also a candidate in guaranteed prize pools. Over the past five-plus years, Kelce has had a 0.76 correlation with his quarterback (per our FantasyLabs Correlations Tool). If Kelce has a big game, Mahomes probably will too. For tournaments, use our Lineup Builder to stack Kelce with his passer.

Kelce is the No. 1 tight end in the Bales, SportsGeek and Hodge Models for FanDuel, where he has a position-high 10 Pro Trends.

Let’s start with the matchup: It’s bad. The Colts have held opposing tight end units to a league-low 4.5 fantasy points per game on 49-424-1 receiving.

But they also haven’t faced many strong tight ends this year, and Waller is one of the strongest in the league, ranking No. 1 at the position with a 28% target share and 0.58 WOPR.

Among tight ends, Waller trails only Travis Kelce with 93.3 AirYAC.

But with George Kittle (foot, IR) on the sidelines, Waller is the clear No. 2 tight end behind Kelce each week.

Waller has been at least a fantasy TE2 in all but one game since last season, and more often than not he has been a TE1. 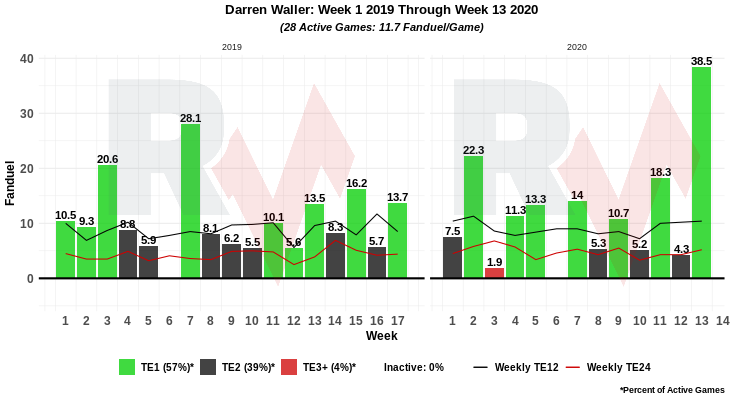 Coming off his massive 13-200-2 receiving performance on 17 targets, Waller is in peak form.

Waller is a locked-in top-two TE1 in season-long leagues and the No. 1 option in the Koerner and Freedman Models for FanDuel, where he has a position-high +2.83 Projected Plus/Minus as well as a 99% Bargain Rating.

T.J. Hockenson, Detroit Lions (+7.5) vs. Green Bay Packers (55 O/U): No. 1 wide receiver Kenny Golladay (hip) looks unlikely to play, and pass-catching back D’Andre Swift (illness/concussion) is still uncertain, so Hockenson could could see more than his usual allotment of targets. No. 4 at the position with 11.6 expected fantasy points per game, Hockenson has been a fantasy TE in 55% of games this year. 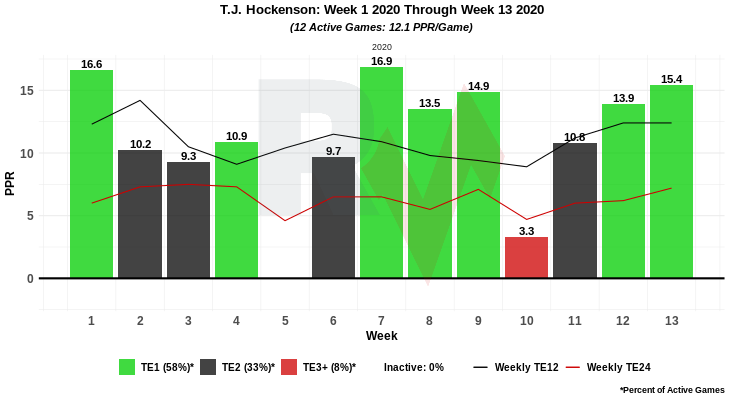 Over the past three weeks, Hockenson is 16-241-0 receiving on 24 targets without Golladay and Swift.

Evan Engram, New York Giants (+1.5) at Arizona Cardinals (45 O/U): Even with the Week 7 return of No. 1 receiver Sterling Shepard, Engram is No. 2 among all tight ends with a 26% target share and No. 4 with 12.9 expected fantasy points per game over the past six games. Engram is the top tight end in Josh Hermsmeyer’s Week 14 Air Yards Buy-Low Model.

You can bet on this game at DraftKings.

Tonyan has notably negative splits with No. 1 receiver Davante Adams … 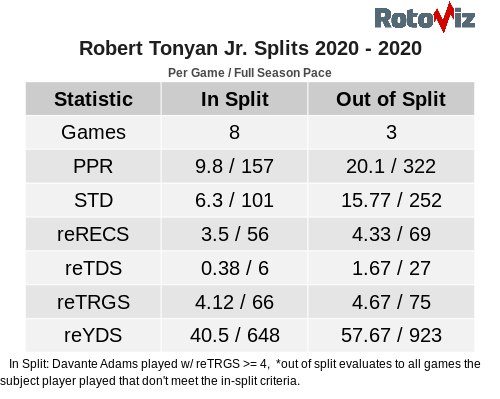 … but he still seems to be a favorite of Rodgers, given his 17-183-3 receiving performance over the past month. The Packers have a slate-high 31.5-point implied Vegas total.

Dalton Schultz, Dallas Cowboys (-3.5) at Cincinnati Bengals (42.5 O/U): As far as I can see, Schultz has two factors in his favor.

Dalton has a position-high +2.80 Projected Plus/Minus on DraftKings.

Logan Thomas, Washington Football Team (+3) at San Francisco 49ers (43.5 O/U): Opposing tight end units are No. 31 against the 49ers with 38-356-3 receiving, so the matchup is bad, but Thomas is coming off career-best 9-98-1 receiving performance against the Steelers No. 1 tight end defense. With a minimum of four targets in every game and an average of 5.8 targets for the season, Thomas has an elevated floor. In the post-Dwayne Haskins era, Thomas has averaged a respectable 7.9 yards per target.

Jordan Akins, Houston Texans (-1.5) at Chicago Bears (45.5 O/U): Even though the Texans were without wide receivers Will Fuller (suspension), Kenny Stills (released) and Randall Cobb (toe, IR), Akins was just 2-10-0 receiving on three targets last week. Even so, he ran a season-high 31 routes from the slot and split out wide. With that kind of usage, he could get more targets.

Mo-Alie Cox, Indianapolis Colts (-3) at Las Vegas Raiders (51.5 O/U): This isn’t saying much, but Alie-Cox is the Arbitrage Trey Burton. In their eight games together …