Here’s where they place within our Week 14 fantasy football rankings (as of Tuesday evening).

Of these six, the two who stand out most to me are Wilson and Herbert. The other guys I will highlight as needed in the section on players with week-winning upside.

At the beginning of Book One of John Milton’s “Paradise Lost,” the Bard describes the fallen angels and the hellish state in which they find themselves after their failed rebellion against God: “Sights of woe, regions of sorrow, doleful shades,” etc., etc.

You get the idea. It’s Hell. Not a good place.

The description ends with this line: “O how unlike the place from whence they fell!”

Whenever I think of Wilson and the Seahawks, that line comes to mind.

Through the first eight games of the season, Wilson was the MVP frontrunner and had an elite 9.3 adjusted yards per attempt (AY/A). But over the past month, Wilson has regressed to an unfortunate 6.4 AY/A.

In the first two months of the season, Wilson had at least 300 yards or three touchdowns passing in every game. But in his past four games, Wilson has failed to hit either mark.

Since Week 10, Wilson has looked nothing like an MVP. He hasn’t really even been a good quarterback (per RotoViz Game Splits App). 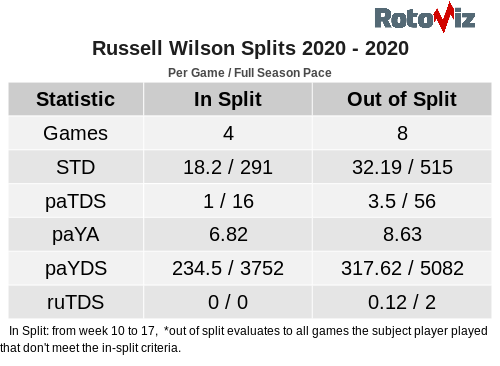 But we shouldn’t lose sight of the bigger picture: For the season, Wilson is on pace for 4,500 yards and 40 touchdowns passing. That’s phenomenal.

With 3,479 yards and 32 touchdowns passing, Wilson is in rare company: Only nine times in NFL history has a quarterback hit both thresholds in his team’s first 12 games (including Wilson):

Wilson is producing at a near-historic rate and is No. 3 at the position with +6.2 fantasy points over expectation per game (per RotoViz NFL Player Statistical Summary).

For the season, he’s still No. 5 at the position with 27.5 fantasy points per game.

And he’s in a fantastic bounceback spot against the Jets, who rank No. 32 with a woeful 30.2 coverage grade (per Pro Football Focus).

Wilson’s matchup is almost as good as it gets.

For the first half of the season, perimeter cornerbacks Blessuan Austin and Pierre Desir and slot corner Brian Poole were the starters, but not one of them has played for the past month. Austin (neck, IR) and Poole (knee, IR) have been sidelined with injuries and Desir was waived in Week 10.

In their place, the Jets are starting backups Lamar Jackson and Bryce Hall on the outside and Arthur Maulet in the interior, and that means Wilson’s wide receivers have fantastic matchups.

D.K. Metcalf will run most of his routes against Jackson, an undrafted rookie backup who in five starts has allowed five touchdowns, the most recent of which you’ve probably seen …

… and for the season he has allowed 11.2 yards per target.

Tyler Lockett will face Maulet, a special-teams journeyman who has a 42.2 PFF coverage grade this year.

David Moore will match up with Hall, a fifth-round rookie who has allowed a 73.1% catch rate.

Metcalf, Lockett and Moore on their own could gift 300 yards and three touchdowns to Wilson.

It’s just icing on the cake that Wilson is at home, where he has had notable splits in the post-Marshawn Lynch era (since 2016, per our FantasyLabs Trends Tool).

From the sports betting perspective, there are reasons to be enthusiastic about Wilson and the Seahawks. For his career, Wilson is 74-59-7 against the spread (ATS), good for an 8.4% return on investment (ROI, per our Bet Labs database). He tends to be a profitable player to back in a vacuum.

You can bet on this game at DraftKings.

A must-start every-week top-three QB1 in season-long leagues, Wilson is a viable pay-up option for cash games and guaranteed prize pools in DFS. He leads all quarterbacks in our Models with his floor projections.

Wilson is the No. 1 quarterback in the Bales, CSURAM88, SportsGeek, Hodge and Freedman Models for FanDuel as well as the Bales Model for DraftKings, where he has a position-high seven Pro Trends.

How well is Herbert’s season going? He’s a -450 favorite at FanDuel to win Offensive Rookie of the Year. With those odds, Herbert has an 81.8% implied probability to win the award … so his rookie campaign is going pretty well.

In fact, he’s having a season for the ages. In his 11 starts, he has at least 300 yards passing or three total touchdowns in every game but one. That’s the type of consistent production you’d expect from someone like Patrick Mahomes.

In only two games has Herbert not been a fantasy QB1 (per RotoViz NFL Stat Explorer). 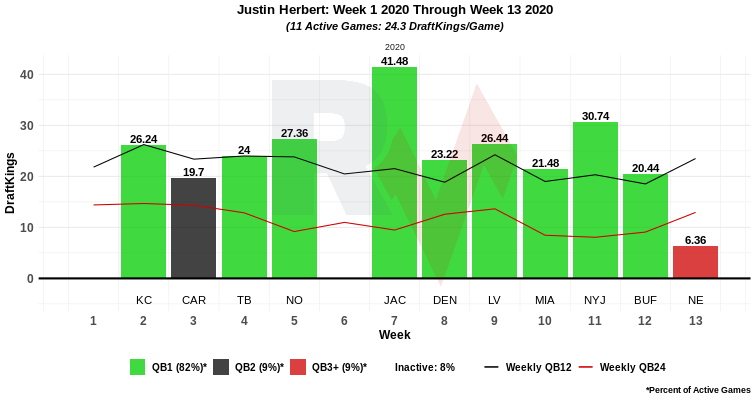 Take me down to the paradise city.

Herbert might have the best matchup on the slate: Opposing quarterbacks are No. 1 in the league against the Falcons with 23.7 fantasy points per game on 3,608-24-8 passing and 55-322-6 rushing.

What they’ve allowed quarterbacks (other than Derek Carr) to do to them qualifies as “Not Safe For Work.”

Unless Herbert’s legal name is actually “Derek Carr,” he should be able to handle the Falcons pass defense. Take me home.

Herbert is a low-end QB1 in season-long leagues and the No. 1 quarterback in the Hodge Model for DraftKings.

Mahomes is the MVP frontrunner with -500 odds at DraftKings.

The Lions are No. 31 with a 33.9 PFF coverage grade and without No. 1 cornerback Desmond Trufant (hamstring, IR) and maybe also No. 3 overall pick Jeff Okudah (shoulder).

Taysom Hill, New Orleans Saints at Philadelphia Eagles (Off the Board): In his three starts, Hill is No. 8 with 22.1 expected fantasy points per game. The Eagles are No. 26 with a 46.0 PFF coverage grade, and Hill’s Konami Code rushing ability has translated into a position-high ceiling projection on FanDuel, where he leads all quarterbacks with a +4.93 Projected Plus/Minus.

Jalen Hurts, Philadelphia Eagles vs. New Orleans Saints (Off the Board): As a transfer senior, Hurts was 3,851-32-8 passing and 233-1,298-20 rushing last year at Oklahoma, finishing No. 2 in Heisman voting. Of all the quarterbacks in the 2020 draft class, Hurts might have the highest fantasy upside, and now he’s slated to make his first NFL start. As Obi-Wan Kenobi says to Tion Medon, “If you have warriors, now is the time.”