In this piece, I highlight quarterbacks who stand out in our large suite of analytical fantasy tools, most specifically, our FantasyLabs Player Models. While the Models are built for DFS contests, this is an all-purpose fantasy article with actionable information for all formats.

As news breaks throughout the week and we adjust our projections, player ratings in our Player Models will change. For updates, visit the Models directly.

Here’s where they place within our Week 1 Fantasy Rankings (as of Monday evening).

We’ll discuss why these two are popping in our models, as well as take a look at some other quarterbacks with week-winning upside and some value plays for the cash game players out there.

This week, Darnold is the leader in the Jennings, Koerner, Raybon and Hodge models, despite being our 21st-ranked quarterback. A lot of that comes down to price as the third-cheapest quarterback while on a team implied for the ninth-most points certainly helps.

There are other reasons to like Darnold here, though.

There’s a long track record of players who have broken out after freeing themselves from Adam Gase (that article was written before Robby Anderson joined the list last year), and Darnold is the latest to get his chance. It’s unlikely, though not impossible, that the former No. 3 overall pick will continue to be as bad as he looked in New York. A revenge game against the team that drafted him is the perfect time to prove he isn’t.

As FantasyLabs co-founder Jonathan Bales puts it: “It’s often more valuable to be first than it is even to be right.” This is our chance to be first on Darnold. If he really is a new and better player in Carolina, we won’t see him this cheap again. He’s also a home favorite, which historically produces good results for quarterbacks, per our Trends tool:

Since Darnold is so cheap, you can find a way to make stacks work with almost any combination of Panthers.

The Bales Model has Murray leading the pack with Darnold second. Murray is fourth in our season-long rankings for the week and trails only Patrick Mahomes in terms of raw projection.

Murray is taking on a Titans team that improved upon its 16th-ranked (by DVOA) run defense with key signings at outside linebacker and defensive line, although it did little to improve its 30th-ranked pass defense with no member of their secondary ranking better than 21st at their position according to Pro Football Focus. This, along with the Titans signing Julio Jones ($6,800), means they will likely be in a lot of shootouts this year. Murray and the Cardinals are well equipped to keep pace.

Murray averaged over 25 DraftKings points per game last season, and there’s no reason to think he won’t keep that up this year, especially in a game with the second-highest over/under on the slate and against a team that should struggle to stop the pass.

Murray is viable in all formats, but utilizing a full-on game stack here will be tricky to fit in. If you can make a lineup around it that works, it could be a great spot to pay up to be contrarian.

This section highlights some other quarterbacks ranked in the top three in at least one of our Pro Models and/or I especially like as a season-long or DFS tournament play.

Everything mentioned above about Murray also applies to his counterpart across the sideline. Tannehill averaged 22 points per game last season and now adds Julio Jones to the mix. Tannehill averaged more points (23.97) in the first two months of the season than he did later on (21.01 in November and December), largely due to the Titans not fully unleashing Derrick Henry ($8,800 DK, $8,900 FD) until later in the season.

Tannehill is a perfect arbitrage opportunity for what will likely be a chalkier Kyler Murray. Quarterbacks on opposing teams correlate at a .59 rate (check out our Correlation Dashboard for more information on correlation), and you can get exposure to this shootout at a cheaper price.

The battle of the birds is another game that should put up a lot of fantasy points. Last season, Matt Ryan led the Falcons to the ninth-highest passing rate in the league while finishing as a back-end QB1. Though Julio is gone, the Falcons still have Calvin Ridley ($7,900 DK, $8,100 FD) and added Kyle Pitts ($4,400 DK, $6,000) to the mix to help Ryan out. Ryan doesn’t bring much to the table with his legs, and he projects to have a fairly narrow target distribution this season, so it’s unlikely he turns in a GPP-winner without bringing Pitts or Ridley with him.

Meanwhile, Hurts was electric as a rusher once he got the starting nod for the Eagles last season:

Most rushing yards in first 4 starts by a QB in NFL history:

In four games as a starter last season, Hurts ran it 46 times for 272 yards and three touchdowns, so his rushing ability provides a nice floor. If he can find more success through the air after a full offseason as the Eagles starting quarterback, his ceiling is the roof.

Hurts can be played naked or stacked with any of his reasonably priced pass-catchers. If going that route, you probably want Ridley or Pitts (or both) in the lineup as well, since the Eagles are likely to be content handing the ball off if the Falcons stay off the board.

As is routine since he joined the league, Mahomes sits atop our Median and Ceiling Projections this week. He also has the highest team (29.5) and game (53) Vegas total on the slate.

We’re beyond explaining how good the guy is. The only real knock is his salary, which is $500 more than the next quarterback on DraftKings. Mahomes also historically performs better as an underdog when you compare his fantasy output in our Trends tool:

Note: Plus/Minus is a proprietary FantasyLabs metric that measures production adjusted for daily fantasy salary. Consistency Rating measures the percentage of games in which a player meets salary-based expectations.

Given his salary and the difficulty fitting in his expensive primary targets (Tyreek Hill and Travis Kelce both cost more than $8,000, meaning a full Chiefs stack costs almost half of the salary cap), I won’t be going his way this week, but that’s a scary stance to take.

Much like Mahomes, there’s never really a bad time to play Josh Allen, just better times. He trails only Mahomes in his Median Projection and implied team points. Allen was the engine of the third-best passing attack (by DVOA) last season while adding eight rushing touchdowns, which is as much as the rest of the team combined.

Unlike Mahomes, Allen performs better as a favorite (as most goal-line running backs do). Combine that with a cheaper salary, more condensed target distribution, and cheaper primary receiver (Stefon Diggs, $7,600 DK, $7,900 FD), those factors make him the better play to me in this one.

We’re going to group these two together due to their similarities (on this slate). Neither man was sure to be the starting quarterback when DraftKings released their prices, so both benefit from a serious discount over what their prices would normally be. Accordingly, they lead the slate in our Pts/Sal Projections.

Neither guy is the sexiest name to click this week, but to quote Billy Hoyle: “I’d rather look ugly and win.” If Vegas is correct and the Broncos and Patriots control their games, don’t expect a lot of passing — both teams were in the bottom seven in the league of pass rates when their team is tied or leading (per Sharp Football): 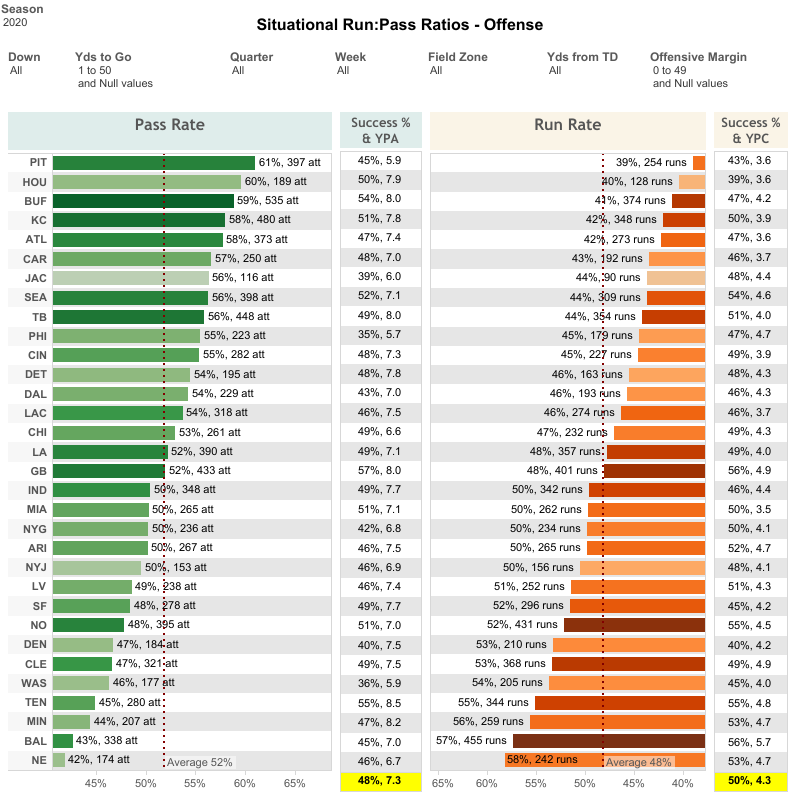 Jones is a far better cash than GPP play since it’s unlikely the Patriots unleash their rookie quarterback in his debut unless they fall behind early. We don’t project any of his pass catchers to score more than 11 DraftKings points themselves, which also makes stacking hard.

I can see a case for Bridgewater in GPPs, although it’s essentially a bet on the Giants offense given his more explosive weaponry. We have both Jerry Jeudy ($4,800 DK, $5,500 FD) and Courtland Sutton ($5,200 DK, $5,800 FD) projected over any receivers on the Patriots, and their reasonable prices make Broncos stacks slightly more viable.

I don’t think we need to get quite so cheap at quarterback this week, given the value to be found at other positions. That said, if you’re looking to cram in some high-priced players at other spots, this is certainly a viable way to do it.