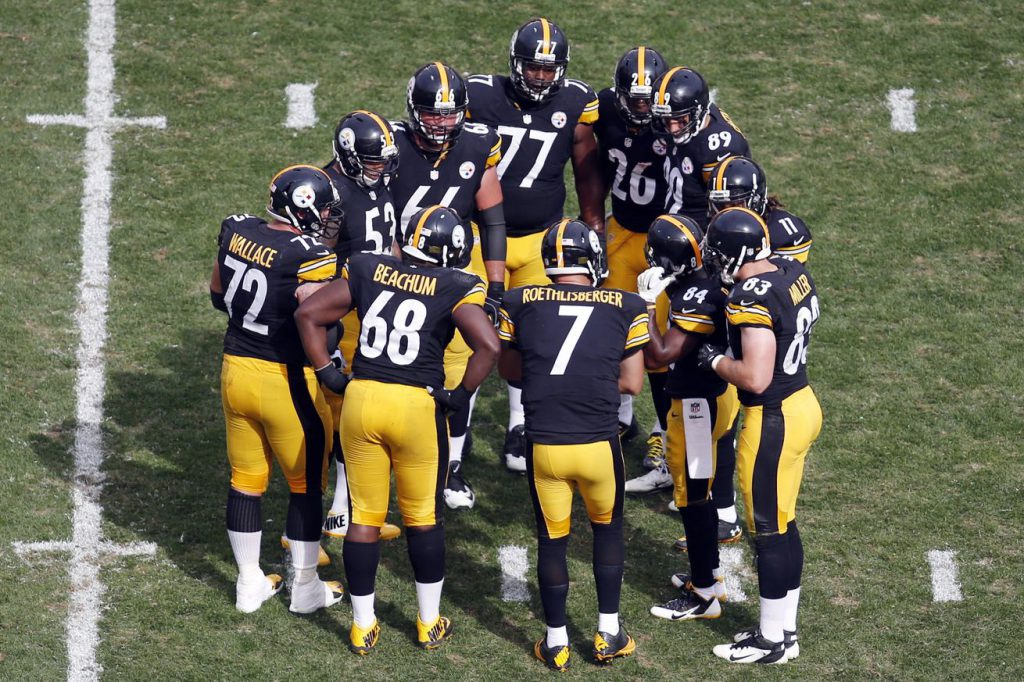 Teammate correlations are incredibly important in daily fantasy football. On the correlation continuum, those in football lie somewhere between those in basketball and baseball.

In MLB DFS, every positive action for a player is also positive for his teammate. There is no time limit in baseball. In theory, a team could score 200 runs. On the other end, basketball — like football — has a time limit and thus all players, even teammates, are competing for a finite amount of fantasy points. Unlike football, however, basketball players rarely score points on the same play, and even in the one instance where they can, the overall fantasy impact of a point guard getting an assist and a power forward getting a field goal is far less than that of a quarterback throwing a touchdown to a wide receiver.

Most people know the rules and follow them blindly: Stack as much as possible in MLB, stack the sexy correlations in NFL (quarterback-wide receiver or quarterback-tight end), and don’t stack in NBA. Rinse and repeat.

The problem with approaching DFS tournaments that way is that it limits the ‘usable value‘ of that strategy. Tournament strategies are only as useful as the ownership edge you have with them, which is why stacking the top half of the Rockies lineup at home doesn’t win half of the guaranteed prize pools every year. You can’t just find edges in DFS: You need to find independent edges. 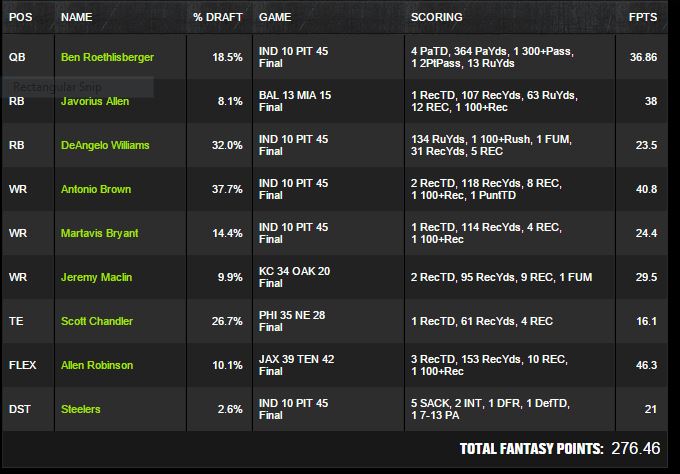 The Steelers put up 45 points on the Colts, and this user had Roethlisberger-Williams-Brown-Bryant-Steelers D/ST. Like Scrooge McDuck diving into money pools.

At the time — and still, probably — this seemed like such a suboptimal lineup because of negative correlations. We know that quarterback-wide receiver is an extremely positive correlation, so Roethlisberger and Brown together makes sense. But adding another wide receiver? And then a running back?!

RotoViz put together a positional correlation chart a couple of years ago that DFS users reference like scripture:

It is a very useful chart. However, the red blocks — the negative correlations — can really hurt you in large-field GPPs.

The number of entries in a Milly Maker differs depending on the entry fee, but let’s say there are 100,000 entries. That means that your lineup, excluding any theoretical advantage you have because of good strategy or expert analysis, has a one in 100,000 chance of winning the tournament. Those are low odds.

Let’s think about the Steelers game again. They scored over 40 points and the user reaped the benefits of that huge game. What were the “odds” of that happening?

There are 256 games per year in the NFL in the regular season. Let’s look at the past two years, giving us a sample of 512 total games. Out of that sample, how many times did a team score at least 40 points? The answer is 59 (or one in 11.5 games), which works out to about 1.74 games per regular season week. Those are much better odds.

Of course, this is not to say that to win a Milly Maker all you need to do is stack a whole team and watch them score 40-plus points. The question is what strategy — juggling optimality and ownership levels — gives you the best chance of winning a large-field GPP. And perhaps stacking a whole team is that answer.

More on the Matter of Negative Correlations

Getting further into negative correlations, the reason they’re overblown in large-field GPPs is because of the variance of football. If you select random players on different teams then you are banking on all of those players receiving volume and scoring fantasy points within their specific game situations. Basically, you’re relying on a whole lot of factors — market share, game flow, and many more — instead of just one: The game flow of one specific game.

I looked at all 59 of the 40-plus point games in the last two years. Here is the average per-game breakdown of touchdowns and field goals for these high-scoring teams.

In these feasts, there is plenty of food for all hungry parties.

My last point is something that people miss about whole-team stacking and negative correlations: You’re actually mitigating risk.

By eliminating all of the variables needed for a huge lineup when you have a variety of different teams and games represented, and eliminating the need to ‘hit’ on every position, you’re putting yourself in a position to succeed if a single variable goes your way. When you think about it that way — the ‘antifragile’ way — you are optimizing your chance to win the GPP, because you are entirely benefitting from the one unexpected outcome that makes other ‘optimal’ lineups inferior.

Ironically, negative correlations might be the key to building an optimal (GPP-winning) lineup.

What We Know About Games in London