How to Target UFC Strikers for DFS

In January, I wrote about the recent scoring changes for DraftKings’ MMA contests and how players could benefit from the differences between the old and new systems. In this second installment, time l’m taking a longer look at striking and where players can gain an advantage in their approach to playing such fighters in DFS.

As DFS players, we always want to be hunting for leading indicators of fantasy output that aren’t necessarily included in previous score lines (batted ball stats for MLB, targets for NFL wide receivers, etc.) What kind of striking stats can we use as predictive measures for fantasy scoring?

To begin, I computed the total striking points per round, for every round of UFC action since the adoption of the unified rules in 2000 (some fights before that had no round time limit, or 30 minute rounds, skewing the data in a way that isn’t applicable to the sport today).

I examined the correlation between the stat and striking points (R²), as well as the effect size (or slope of the line of best fit on a graph of the data).

Here’s what I found: 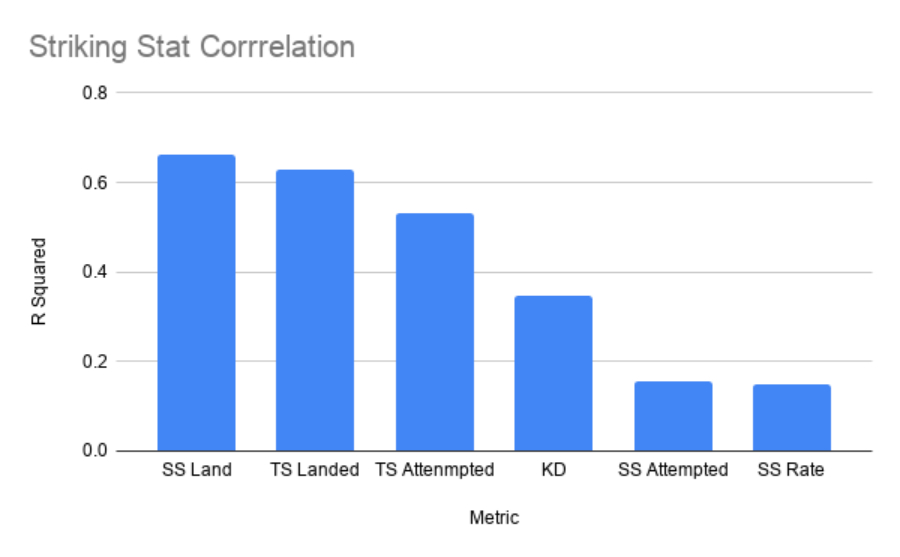 From the data, we can conclude one, very obvious point. Landing more strikes leads to more scoring. Not super helpful, because I can tell you firsthand that fighters are all trying to land strikes as much as they can.

The next most correlated statistic is strikes attempted. Also fairly intuitive, but points us to something more helpful — we want to target high-volume fighters, regardless of the significance of their strikes.

Think of this like usage rates for NFL players, except much more controllable by the fighter (as opposed to a coach). While the effect size is small (.177 points), this is per strike, so with the average fighter attempting about 42 strikes per round, this can add up quickly. Just look at Max Holloway’s 200-plus point performance vs. Calvin Kattar that he achieved without any knockdowns, takedowns, or a finish bonus.

While the effect sizes on knockdowns and SS rate are attractive, knockdowns are more of a noisy, event-based stat. Think touchdowns in NFL DFS. While some fighters are certainly much more likely to score them than others, this is likely to be entirely baked into their price and ownership.

SS rate is also tempting, but these rates really don’t vary all that much. SS rate has a variance of .19, compared to TS attempted being 25.62. This means the top 13.6% (roughly, this assumes a normal distribution) of fighters get an extra 2.43 points based on their SS rate, but an extra 4.53 points from TS attempted.

What we really want to be focused on for strikers, or any fighter in a bout expected to be mostly contested on the feet, is opportunity. If you’ve been following along, you’d know that larger fighters offer us an advantage as well. Unfortunately, larger fighters tend to have lower output rates.

However, we’re starting to zero in on the kind of fighter we want: larger and/or more powerful strikers, with high work rates. Ideally, we’d be targeting fighters in bouts where both fighters have high outputs, I like to sprinkle in both guys in my lineups in these situations.

In contests where one fighter is more of a grappler, we’ll want to make sure that our volume-striker has decent takedown defense. You need to be somewhat familiar with the fighters in question to make these calls, but there’s some statistical indicators we can use as well (takedown defense rates, and takedown attempts per 15 min both available on ufc.com).

Next time, we’re going to take a look at the grappling side of things, to see if there’s any data-driven insights we can find about where those points come from.