How to Gain an Advantage on DraftKings’ UFC Scoring Changes

Recently, DraftKings unveiled a much-needed update to its MMA scoring system. Why should we care? Much like in sports betting, when new rules take effect, there are new edges to be gained.

Projection models will need to adapt, certain types of fighters will be more or less valuable, and if we’re able to get ahead of it, the field will be playing catch-up as we’re able to make +EV decisions with our rosters.

There are some major changes to the scoring system to consider. The most eye-catching among them being the “Quick Win Bonus” which the folks at DraftKings presumably added in order to rectify situations where fighters win their bout with one or two punches but still didn’t hit value and/or make the optimal lineup. While still not perfect, this is a huge improvement, as we can finally be excited about quick KOs instead of hoping for the elusive “4:59 of the first” stoppage to the fight.

Striking has also been revamped. Crucially, all strikes will be scored, with significant strikes being worth a total of .4 points, and all other (…insignificant?) strikes scoring .2 points. There were plenty of issues with which strikes were deemed “significant” in the past.

FightMetric, which provides the stats for DraftKings’ MMA contests, defines significant strikes as “all strikes at distance and power strikes in the clinch and on the ground,” but this is clearly subjective, and there were frequent complaints about the scoring. This doesn’t entirely fix the problem, but it at least mitigates the situation by giving half credit for any landed strikes.

Finally, on the grappling side of things, points for positional advances have been removed, and .03 points per second of “control time” have been added. Advances were another semi-contentious topic. What positions count for an advance? How stable must a position be before the advance is scored? The list goes on. Regardless, this isn’t something we will have to worry about moving forward. Control time adds the most interesting wrinkle to the new system.

In the past, fighters who landed a lot of takedowns but were either unwilling or unable to do much with them were rewarded more than fighters who maintained dominant position on the ground. While a takedown is still worth more than half a round of control time, this is a significant change.

This also includes dominant positions in the clinch, which will be challenging to discern. My guess is that anytime a fighter is pressed against the cage it will be considered dominant for their opponent, but might only be applied to more significant situations like a full Thai plum.

Using a database of more than 13,000 UFC rounds (minus Ultimate Fighter bouts), I sorted out what types of fighters will be more or less valuable than before under the new scoring system. Some of this is more art than science, as control time isn’t included in the database, and will be based partially on my experience as a professional fighter along with the data, but it should still give us some insight into what adjustments we can look for. First, let’s start with the 25-point quick win bonus.

Roughly 15% of UFC fights have ended in the first round. I suspect this number is significantly lower now than in the early days of the sport (and I’ve also omitted any bouts classified as “open weight” in the database, which adjusts for this to a degree), but even if the current number is only half (and I suspect it’s higher) that means on any given night it’s more likely than not that a fight ended within 60 seconds.

First, let’s look at the percentages of first minute and first round stoppages broken down by weight class. 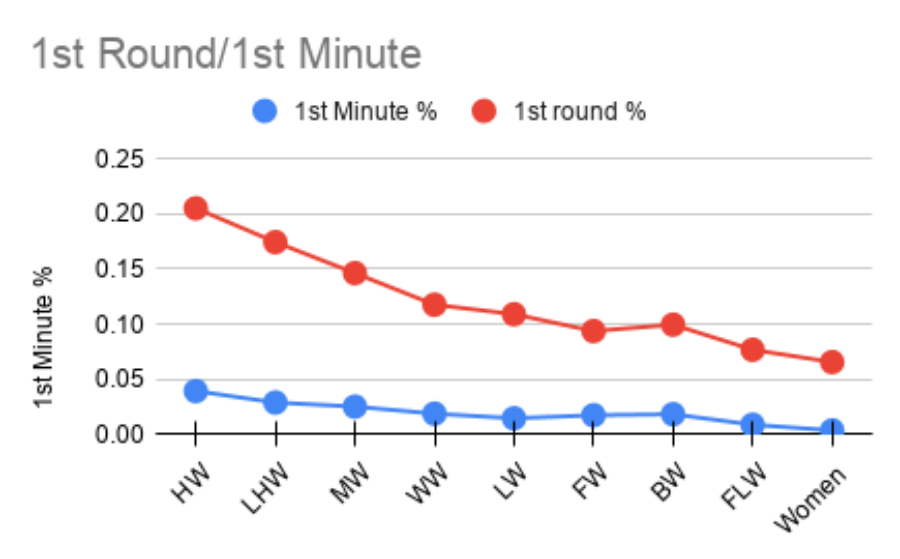 (I’ve included all female fights together for the entirety of this project, for reasons I’ll explain later)

As we can see, first-round stoppages are highly correlated with the weight class of the fighters. Fairly intuitive, and common knowledge among MMA DFS players. But looking closer, we can see that this trend is also true of first-minute wins.

What this means for us is that the benefit to rostering the big boys is now magnified even further. I doubt the pricing will reflect this initially, so keep that in mind. 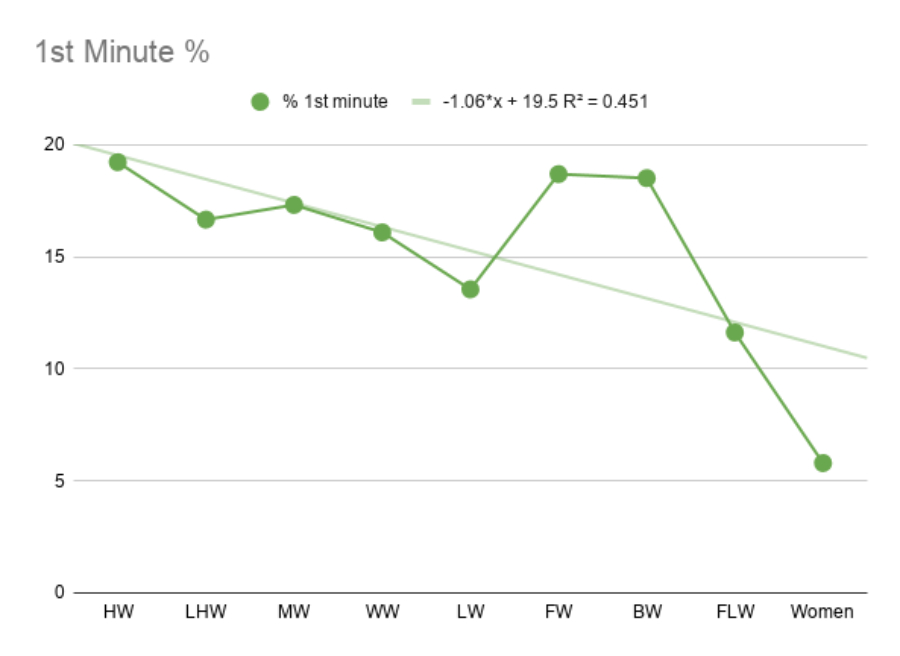 While the effect is less stark, there’s still a positive correlation with size. The spike at featherweight and bantamweight is interesting, but both classes end their bouts in the first round fewer than 10% of the time to begin with, so it’s probably not worth chasing after unless the fighter is known for their knockout power to begin with. 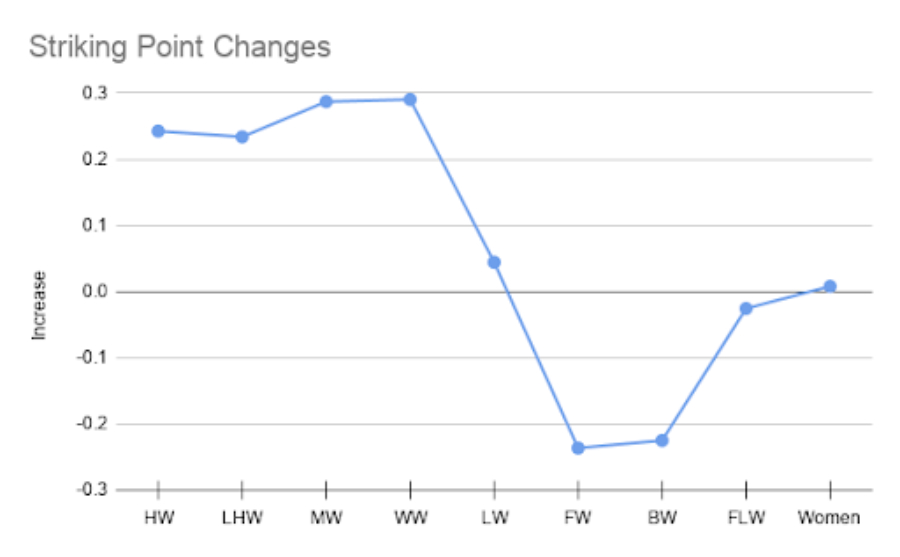 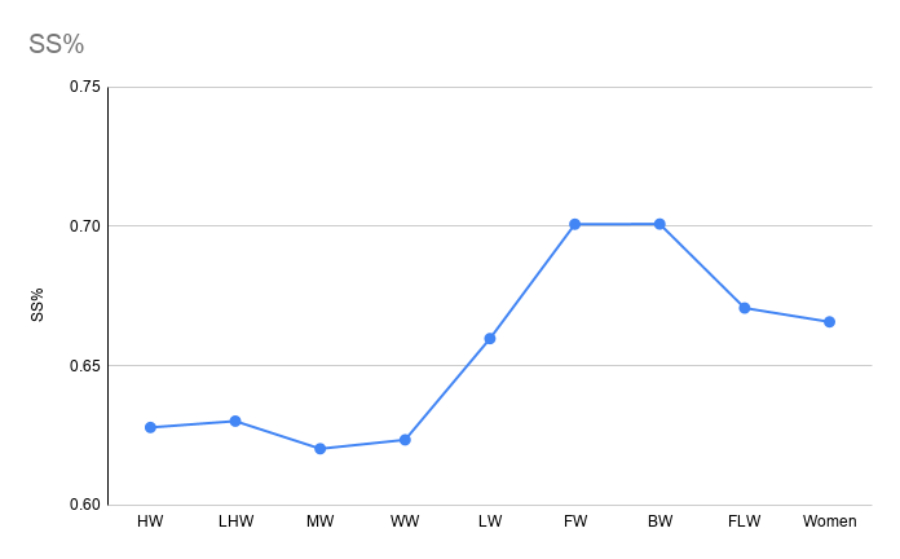 Assuming DraftKings’ pricing algorithm factors in past or average fantasy points (will we ever really know?) this means that fighters fitting that description are likely to be underpriced (good for cash games) and perhaps overlooked by the unwashed masses randomly clicking the guys with the biggest numbers under “FPPG.”

Here’s where things get a little more speculative. As mentioned above, “control time” is not a variable included in the data I’ve mined for this article, nor is advances (I don’t think either were official stats until somewhat recently, although I could be wrong) so we’re going to have to use some intuition here.

Let’s start by looking at takedown attempts per round: 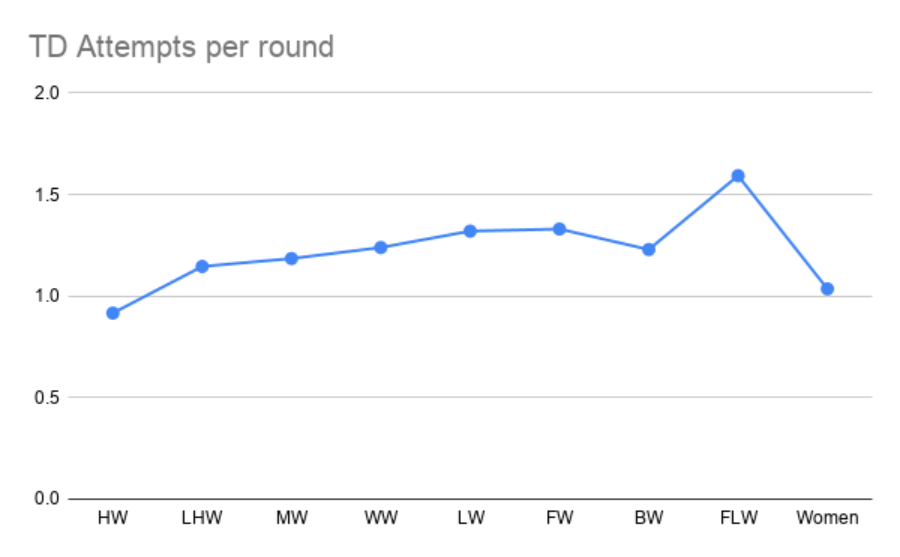 (Note: this is probably a case where treating female fighters as a homogenous group and/or as the lowest weight class is less helpful, but that can be expanded upon later.)

Takedown attempts rise clearly as you decrease in weight class. Under the prior scoring system, this was a boost to smaller fighters, as the five points for takedowns could add up quickly if a fighter were able to get multiple takedowns in a round (average striking points per round for all fighters was just over seven, so even two takedowns was significantly better than striking all round).

Now, however, with the addition of control time, if a fighter is able to control their opponent on the ground for just under three minutes, that counts for another takedown. This, again, benefits larger fighters to a degree, as part of the variance in takedown attempts is driven by the increased difficulty larger fighters have getting back to their feet (which means more control time).

I can’t score another takedown if you don’t get back up, right? This also gives a slight boost to dominant grapplers, as they will be accruing points while they work for submissions.

Control time will also count “dominant clinch position” for points. To be totally honest, I can only guess as to what clinches will count as “dominant.” If it turns out that holding an opponent against the fence is dominant (a point I would argue heavily), then some “wall and stall” type fighters become more valuable.

This also gives a boost to shorter, more muscular fighters, as they commonly want to stop their opponents from using their reach advantage to land shots, and one way to do this is to jam them against the fence. The changes to the striking system also mean that the short strikes fighters throw from this position will score points that they wouldn’t have before. Regardless, don’t put much weight on this until we get a better feel for how this is scored.

The new scoring system shifts value around in a few ways. Primarily, larger fighters, already more valuable thanks to their higher stoppage rates, see a further jump in value. Additionally, we can look for higher volume strikers, regardless of the significance of their strikes, since total output will matter more moving forward.

This will likely be the most important change for fantasy purposes. Finally, slower-paced fighters who like to control fights — either on the ground or possibly in the clinch (the untrained masses might refer to these as “boring” fighters) — become more valuable as they will be racking up points while running the clock. Since their ceiling won’t rise much, those fighters will be better suited for cash games, but can still help you takedown a GPP if they add a finish at the end of their grinding.