Action Network senior editor Bryan Mears introduced the funnel defense metric last season, and after a brief hiatus, it has made its glorious return.

These ratings use advanced data to analyze situations in which teams are more likely to pass or run than they usually do. For a comprehensive explanation of how Bryan developed this metric, check out his take here.

Let’s start with a brief recap, then dig into the Week 11 ratings and how to leverage them.

Measuring the Strength of a Funnel Defense

Using data to quantify the strength of a defensive funnel is complex. We must weigh several factors simultaneously:

Our metric weighs each of these statistical factors and produces weekly matchup-based ratings for each NFL team.

Check out our live odds page for the latest lines, spreads, totals and betting percentages.

By averaging the Pass Funnel ratings for both teams in a given matchup, we can more easily identify games that could favor a passing-game script on both sides. Heavy passing volume presents an opportunity for a potential shootout.

Consider rostering or stacking players from these high-volume games in DFS, and also consider taking the over the games toward the top of the list.

Both teams in this matchup boast Pass Funnel Ratings of more than 75, and it’s easy to see why.

It’s difficult to have faith in Eli Manning and the Giants offense, but if ever there was an opportunity to bet on New York, it’s at home in this defensive matchup. Taking the over is also particularly tantalizing given the propensity both squads have to pass the ball.

The total (52) has not moved, despite 58% of public bets coming in on the under.

This game sets up for another big day for Packers RB Aaron Jones. Since Week 5, Jones’ rush attempts have increased each game, while the Packers’ pass play percentage has declined each game. Those two statistics are nearly perfectly inversely correlated, boasting a Pearson’s coefficient of r=0.93, which is outstanding.

Of course, we shouldn’t simply accept this trend at face value. Often, running backs experience an uptick in carries when their teams are winning. Offenses playing with a lead tend to play more conservatively, opting to keep the clock moving via the run game. Therefore, we must be certain that Jones’ increase in rushing volume is independent of game script.

Because of that, we can safely say that his uptick in carries isn’t related to garbage time rushes. Rather, this is a systematic decision by the coaching staff, further supported by the Packers’ trade-deadline decision to trade away RB Ty Montgomery.

Fellow Packers RB Jamaal Williams has also seen a marked decline in his production over the same stretch. From Weeks 1-4, he averaged a healthy 11.8 carries per game. But since Week 5, he has ceded carries to Jones and has averaged only 5.2 carries per game during that stretch.

All these statistics confirm what we can see with our own eyes: Jones has officially wrestled the job firmly away from Williams and all other running back contenders.

The Packers earn a 61.29 Run Funnel Rating for this game, primarily due to the Seahawks’ 83.87 Run Defense Rating, which suggests a strong funnel toward the run. Seattle boasts the sixth-best Pass Defense DVOA but just the 20th-best Run Defense DVOA.

From a game-planning perspective, the Packers would be wise to attack the Seahawks on the ground. This game plan is also increasingly likely based on Jones’ upward trends over the past several weeks.

The Seahawks also boast a strong Run Funnel Rating for this game. Thankfully, analysis for them is much more straightforward than for the Packers. 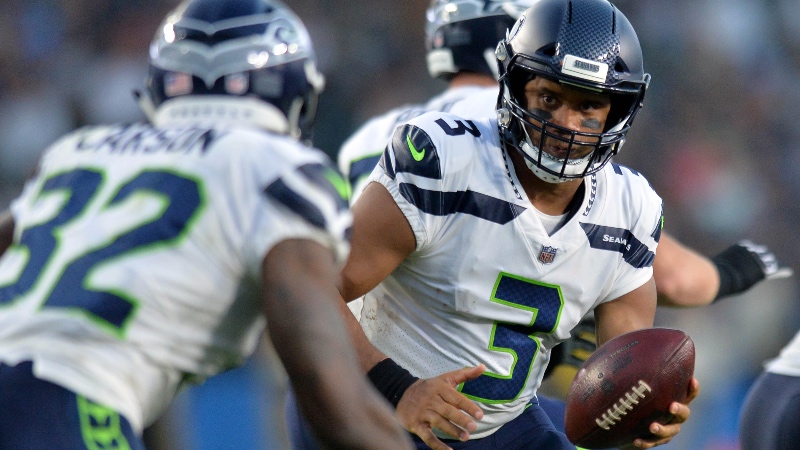 Nonetheless, just because Seattle is in a strong Offensive Run Funnel does not necessarily mean QB Russell Wilson has limited upside. He has been one of the most efficient passers in the NFL this season, ranking 26th in pass attempts but eighth in passing touchdowns and sixth in passer rating.

Despite poor passing volume, Wilson ranks as the QB14 in PPR settings.

He has posted uncharacteristically low rushing numbers this season, which lowers his floor projection. However, he has rushed for 133 yards in his past two games against the Chargers and Rams.

LA and Kansas City will face off on Monday Night Football in a game with a historically-high 63.5-point over/under. Interestingly, however, this game does not project as a Pass Funnel-oriented shootout. Instead, these teams feature the second-highest combined Run Funnel Rating (68.15) on the slate.

While pass funnels are generally more indicative of a high game total than run funnels, it’s important to reiterate that our Funnel Ratings predict game script — not scoring potential per se.

Our formula utilizes DVOA as a measure of a team’s proficiency running or throwing the football, but DVOA’s inclusion is not to project the magnitude of a team’s offensive output. Rather, it’s to discern the extent to which a team may lean on its offensive strength.

Both coaching staffs have maintained a strong commitment to a consistent and balanced offensive game plan, but of the two, the Rams are definitely more prone to being funneled toward a run-heavy script.

Los Angeles has proven its commitment to feeding Gurley touches regardless of matchup, but Gurley’s rushing volume has been strongly related to Run Funnel Ratings this season.

Take a look at this scatter plot relating his rush attempts to his opponent’s current Defensive Run Funnel Rating. Kareem Hunt’s plot is provided for reference.

The correlation between his opponent’s Run Funnel Rating and Gurley’s rush attempts is r=0.63, which is surprisingly high. This means that 63% of the variability in his rush attempts per game is explained by defensive matchup, according to our Funnel Ratings.

For perspective, Kareem Hunt’s correlation for the same relationship is only r=0.07, which you can clearly see in the plot above. Gurley’s and Hunt’s plots look completely different, with Hunt’s fitting basically a flat trend line. It seems that Sean McVay is simply more adaptable in his play-calling than Andy Reid.

This trend also applies to the quarterbacks in this matchup. Goff boasts a correlation of r=0.22 based on Pass Funnel Ratings, whereas Patrick Mahomes’ correlation is r= -0.21.

Mahomes’ negative correlation indicates that the Chiefs actually tend to throw more often in defensive matchups that should favor the run.

Neither of these passing correlations is particular strong, but it does highlight the difference between McVay and Reid: McVay is more willing to scheme his play-calling based on matchup; Reid and the Chiefs want to impose their will on the opponent, regardless of whatever matchup discrepancies may exist.