Week 3 of the NFL season is here, and the hits and misses are starting to solidify across the DFS space.

This is a wonderful time of year, so let’s take a deep dive into which players to target and avoid in the third week of the 2021 NFL season.

I’m going back to the well with Justin Herbert in one of three games with a 55.5 point over/under in Week 3. In the 20-17 loss to Dallas, Herbert completed 31 of 41 passes (75.6%) for 338 yards. It was Herbert’s 10th game of 300-plus passing yards of his career. Los Angeles struggled with red-zone mistakes, losing two touchdowns on penalties. Herbert finished with just one touchdown and two interceptions.

Herbert has thrived in his two games against Kansas City, posting huge fantasy numbers as a rookie. 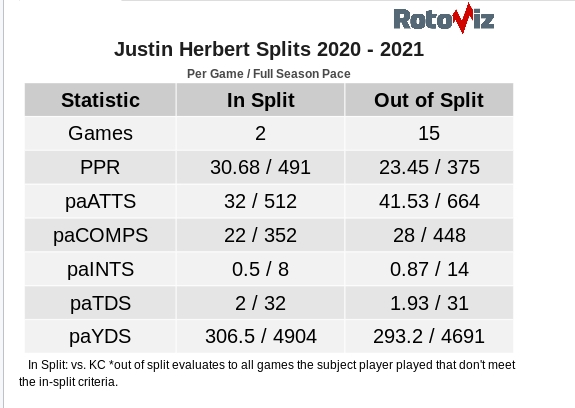 Playing against Patrick Mahomes forces the opposing quarterback to score points to keep pace. In their two games this year, Kansas City’s opponents have averaged 32.5 points per game, including Lamar Jackson’s overall QB4 performance in Week 2.

Herbert ranks seventh in pricing on DraftKings and ninth on FanDuel. His upside is getting discounted as a result of the Cowboys-Chargers game being the only late-Sunday contest that did not go over the projected total.

I expect Herbert’s ownership to be suppressed as a result of recency bias, despite facing a Chiefs team that has allowed the ninth-most fantasy points to opposing quarterbacks this season. Last season, Herbert threw for over 300 yards in both games, including 311 yards in his first career start against the Chiefs.

I prefer Herbert over higher-priced options such as Tom Brady against a strong Rams defense and Kyler Murray/Lamar Jackson in potential blowouts.

Don’t be afraid; go back to Justin Herbert in this offensive fireworks display in Kansas City.

The Atlanta signal-caller is obscenely low on DraftKings, where he is only the 22nd-highest priced quarterback. Ryan is actually ranked lower than Jameis Winston ($5,600) at New England and Taylor Heinicke ($5,600) at Buffalo.

The Falcons offense started to gel last week, posting 25 points against an elite Tampa Bay defense on the road. Ryan threw for 300 yards with two touchdowns and three interceptions. He ranked as the overall QB16 but was just one less interception away from the QB11 spot.

The Giants defense has not impressed this year, allowing the overall QB15 performance to the conservative Teddy Bridgewater in Week 1, followed by the overall QB12 stat line to backup Taylor Heinicke. Veteran Ryan with solid receiving weapons should produce well above his expected outcome in a game the Falcons will desperately need.

The frustration with Edwards-Helaire’s lack of production has gone too far. The Kansas City starter is just $4,800 on DraftKings, the same price as Carolina backup running back Chuba Hubbard and Tennessee backup Jeremy McNichols. This discrepancy has made Edwards-Helaire our third highest-rated RB play in the Bales Model on FantasyLabs:

The Chiefs face a Chargers defense that has allowed the sixth-most fantasy points to opposing running backs through two games. Los Angeles has allowed the following individual stat lines so far this season:

At Edwards-Helaire’s price, he simply needs average yardage and a touchdown to hit the coveted “3x” on his DFS value. Despite his struggles against Cleveland and Baltimore, Edwards-Helaire has still earned over 87% (27 of 31) of the team’s running back carries. He also earned three of the four running back passing game targets.

Capitalize on this one-week price correction with the Kansas City starter.

Gibson will break out soon enough, but it won’t happen against Buffalo. The Bills stifled their opponent’s leading rusher in each of their first two games, allowing their third-fewest fantasy points to opposing running backs. Buffalo has also been fantastic against pass-catching backs, allowing just five receptions (on 11 targets) and 25 total receiving yards through two games.

The stat lines of those backs to have faced Buffalo are as follows:

Buffalo will force Washington quarterback Taylor Heinicke to beat them through the air, which should also prove difficult. Buffalo has also allowed the third-fewest points to opposing wide receivers, making the path to a Washington victory a defensive struggle.

There just isn’t a path to upside for Gibson at a price point that has much more appealing options. Players such as Baltimore’s Ty’Son Williams ($,5800) and D’Andre Swift ($5,800), and Chase Edmonds ($5,700) all have better ceiling possibilities than Gibson.

Better days are ahead for the explosive Gibson, but not this week.

The price for Sutton has not adjusted enough since Jerry Jeudy’s injury. Sutton led all receivers in air yards for Week 2, with 66.3% of  Denver’s team total. Sutton is atop all wide receivers in one of the most predictive stats of fantasy production through two weeks.

The Broncos now return to Denver for their home opener against a Jets team struggling to compete. New York is coming off a 25-6 loss to New England, where rookie quarterback Zach Wilson threw four interceptions. Sutton saw 12 targets in Week 2, three times as many as any other Broncos wideout.

Sutton’s 20.5-point Ceiling Projection (DraftKings) on FantasyLabs is the eighth-highest mark, yet he is only the 25th highest-priced wide receiver. Given the PPR bonus on DK, Sutton has a high floor even if he doesn’t catch a touchdown.

Those banking on an A.J. Brown bounce back in Week 3 will be sorely disappointed. The winless Colts are desperate for a win and will be a much stronger opponent than most fantasy players will realize.

Over his career, Brown has struggled to find fantasy production against their division rival. 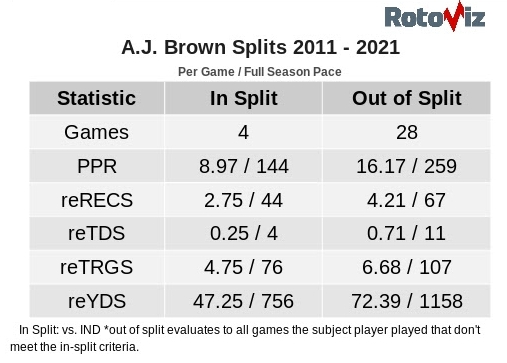 Julio Jones looked like the better receiver against Seattle, doubling Brown’s reception total and tripling his receiving yardage. Brown also struggled in Week 1 against an Arizona secondary that was just torched by Minnesota’s trio of wide receivers at home.

Brown may be a popular DFS play on the belief of a home bounceback against the Colts. This week, I feel there are better options than an underproducing wideout still valued in the mid-$6,000 tier on both sites.

This may be the last time the dynamic rookie will be priced under $5,000 on DraftKings. Pitts turned heads in Week 2 with five receptions and 73 receiving yards in a loss at Tampa Bay. The Falcons offense did keep this game competitive through three quarters, trailing only 28-25 before a 20-point fourth-quarter explosion by Tampa Bay.

Atlanta head coach Arthur Smith should now realize he needs to maximize his few offensive playmakers to generate scoring, which will focus on Pitts and wide receiver Calvin Ridley. The Giants have allowed the fourth-most fantasy points to opposing tight ends, including the following stat lines:

This is not elite production but shows ample opportunity that Pitts should use to create production. When betting on weekly DFS upside, it doesn’t hurt to back a player with the following metric profile (PlayerProfiler):

We always look for the low-priced tight end DFS play, but Gesicki is not the answer. Las Vegas has been superb at limiting opposing tight end production, ranking sixth-best through two games. The Raiders held Baltimore tight end Mark Andrews to just three receptions and 20 receiving yards in their overtime Week 1 home win.

Gesicki has just three receptions and 41 receiving yards this season and has even ceded opportunities to both fellow tight ends Durham Smythe and Cethan Carter.

With the more stationary Jacoby Brissett at quarterback, I expect an increased volume of running back passes at the expense of vertical pass-catchers such as Gesicki.

This isn’t a salary play since Gesicki is priced low on both sites. But if you are looking for a value play to open up salary at other sites, please look elsewhere.