A pet peeve of mine — other than the phrase “pet peeve” — is statements like these:

• This game has a 50-point Vegas projection.
• Vegas projects this team to score 27 points.
• I just saved 15 percent on my car insurance.

Why do I care about the words people use to describe the numbers gleaned from Vegas data? — other than the fact that I’m an *sshole who cares about accuracy and precision?

If people say “projection,” they might forget what the data they’re using represents and how it functions. They might trick themselves into weighting Vegas too much in their decision-making process.

If, however, people use the word “implication” (or some variation thereof) then they (I think) will have a greater chance of remembering that they’re using conjectural information — that which has been unspoken. “Implication” carries within it the reasonable possibility of doubt. And doubt is a virtue.

The Utility of Vegas Data

In what I’ve just written, I don’t mean to imply (#NailedIt) that Vegas data doesn’t have value. It does. That’s why in our suite of Tools we have a free Vegas dashboard that updates automatically in real time. That’s why we have an entire section of backtestable “Vegas Filters” in our free Trends tool: 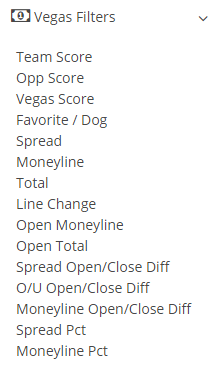 And that’s why Vegas-based factors can be weighted in our Player Models to whatever extent subscribers find useful.

So within the context of this larger conversation, I want the subtext to be clear. This piece is not about how Vegas data is useless. It’s about how that data can be used.

What is, however, contained and implied within the lines is Vegas’ expectation of how the public might bet.

I guess what I’m saying is that, for our purposes, Vegas doesn’t make projections. Vegas makes money.

The first mode of moneymaking is what encourages people to think of “Vegas projections.” It encourages the idea that Vegas has an outcome-neutral perspective on the lines it sets and the events on which those lines are based. That’s probably what Vegas would like people to think.

The second mode of moneymaking is exemplified by what we saw in the Seahawks-49ers game in the last week of the 2016 NFL regular season:

When the lines were first released, the Seahawks were 9.5-point road favorites in a divisional game. The public heavily bet on the Seahawks, and by the time the game started on Sunday at 4:25 PM ET the Seahawks were favored by 11.5 points with a slate-high 80 percent of the wagers.

Vegas made a lot of money — not because the spread was correct but because Vegas bet on itself. Vegas bet that its knowledge of how the population was likely to bet was more important than the odds that the 49ers wouldn’t cover.

Bringing It to DFS

For better or worse, I now look at everything through a DFS lens. From this perspective the first Vegas method of moneymaking makes me think of cash games; the second method, guaranteed prize pools.

In the first method, Vegas is focused simply on grinding out a steady profit: Winning lots of money isn’t the goal. Winning certain money is the goal. Basically, Vegas looks a lot like the DFS players who enter cash games every slate.

Also, under this scenario the Vegas data is much likelier to be accurate, since Vegas wishes for the action to be distributed evenly. The lines and the implications are more trustworthy. As a result, this data can (probably) be relied upon with more certainty, and that’s good for cash games.

In the second method, Vegas is looking to leverage its knowledge of the crowd to score big money — like a sharp GPP player who focuses less on the preciseness of point projections and more on the probability of ownership projections.

Under this second scenario, Vegas implications aren’t likely to be accurate unto themselves. They might, however, still be accurate as representations of what the majority of the sports-interested population believes. Even though the spread for the Seahawks-49ers game was drastically off in that it wasn’t predictive of the contest itself, it was accurate as a predictor for how the population would wager on the game — and it was profitable for Vegas, so the spread did its job.

In other words, this type of Vegas data might not be reliable for cash games — but the inferences that we can draw from the second-level implications Vegas makes can absolutely be leveraged in GPPs. In fact, this type of ‘population data’ might be much more valuable than the ‘projection data’ that people generally associate with Vegas.

When we see that a slate-high 80 percent of the bets are being made on a double-digit divisional road favorite late in the season, we can’t necessarily take that to mean that Vegas ‘projects’ the road favorite to dominate.

Rather, the implication might be that Vegas expects a lot of people to make a costly probabilistic miscalculation.

We should value Vegas data, but we shouldn’t always take it at face value.

This is the 96th installment of The Labyrinthian, a series dedicated to exploring random fields of knowledge in order to give you unordinary theoretical, philosophical, strategic, and/or often rambling guidance on daily fantasy sports. Consult the introductory piece to the series for further explanation. Previous installments of The Labyrinthian can be accessed via my author page.