I started outlining this piece on Sunday morning. I actually have a whole series (or subseries) planned on resilience and daily fantasy sports. I set up this series last week in my Labyrinthian on the importance of reading. In that piece, I mentioned that I was finishing Resilience: Hard-Won Wisdom for Living a Better Life by Eric Greitens, a former Rhodes Scholar and Navy Seal and the new Governor of Missouri.

Anyway, I started outlining this piece on Sunday morning, and I thought, “It would be nice if a team could fall behind by a sh*tload of points in the Super Bowl and then have a record-setting comeback. I could use that to make some sort of half-*ssed gesture toward the idea of resilience.”

This is that half-*ssed gesture:

• In the third quarter of Super Bowl 51, the Patriots trailed the Falcons 3-28.
• The Pats tied the game 28-28 in the fourth quarter with 0:57 seconds remaining.
• The Pats won in overtime 34-28, scoring 31 unanswered points as Robert Kraft, Bill Belichick, and Tom Brady cemented their legacies as the greatest owner, coach, and quarterback of the modern era if not all time.
• The Pats exhibited resilience in their victory and would not have won without it.
• Resilience is a virtue.

Also, Roger Goodell is the quintessence of douchebaggery. He also might be resilient — no normal person could withstand that kind of booing with a straight face — but, still, he’s a douchebag.

Originally, I thought that I would write just one piece on resilience, but as I read more HBR articles on the subject I realized this topic deserved more coverage.

So I plan to write at least two pieces that touch on resilience. Lucky us.

Why Resilience Is Important

The importance of resilience, or toughness, or perseverance, or whatever you want to call it, is something I’ve always taken for granted. I’ve never thought that resilience was unimportant. And I’ve just assumed that most people think similarly.

If resilience weren’t culturally valued, then the aphoristic wisdom that what doesn’t kill us makes us stronger probably wouldn’t exist.

Last year I had a number of conversations with some great players and thinkers on the DFS Roundtable podcast. (By the way, that pod will soon return.) One theme that guests touched on repeatedly almost regardless of the larger topic was the need for DFS players to be resilient. DFS is not simple, and it’s easy for people to be discouraged by short-term setbacks. Even the best DFS players having losing streaks. It’s their ability to endure that makes the best players so good.

Resilience is important because it’s what enables greatness.

My sense is that everyone knows that resilience is important. If Rocky Balboa can understand its value . . .

. . . then it should be pretty apparent to everyone. After all, the Rocky movies were about nothing if not resilience.

Toward the beginning of his book, Greitens explores the long-term upside of being down in the short term:

To move through pain to wisdom, through fear to courage, through suffering to strength, requires resilience.

The benefits of struggling — of being challenged, afraid, pained, confused — are so precious that if they could be bottled, people would pay dearly for them.

But they can’t be bottled. And if you want the wisdom, the strength, the clarity, the courage that can come from struggle, the price is clear: you have to endure the struggle first.

Basically, if I were to take a Greitensian view of Super Bowl 51 and Brady, I would probably believe that Brady was capable of bringing his team back from a 25-point deficit because he struggled through a position battle in college, entered the NFL as a near-worthless sixth-round pick, and clung to the last roster spot as the Patriots’ fourth-string quarterback in his rookie year. His Super Bowl triumph was the result of his previous struggles and his developed resilience.

Resilience is important because without it we’d die sooner than we should. (Of course, what I just said is based on the assumption that living is important.)

The Nature of Resilience

Knowing the value of resilience and being resilient are different. How does one transition from knowledge to being? In future pieces, I’ll have more thoughts on how one becomes resilient. Right now, I want to explore primarily what resilience looks like and where the path to resilience starts.

For Greitens, resilience resonates with this famous sentence from Ernest Hemingway’s Farewell to Arms: “The world breaks everyone and afterward many are strong at the broken places.” There are two salient points to be made:

• Resilience is the act of transforming a weakness into a weapon. It is a reaction of robustness and maybe even antifragility.
• Resilience is something that “many” (but not all) people acquire. It’s what separates striving from suffering.

Resilience begins with you: you are the place you need to start if you want to become strong in the face of adversity.

Resilience is distinct from mere survival, and more than mere endurance. Resilience is often endurance with directions. Where are you headed? Why are you going there? It’s not enough to want to be resilient. What do you want it for? What are you enduring for?

Being resilient starts with a choice.

We weren’t born with resilience, any more than you were born with the ability to use a compass or aim a rifle. Resilience is an excellence we build. We can practice it in the choices we make and the actions we take. After enough practice, resilience becomes part of who we are.

First, you can develop resilience. Anyone can do it. No one can do it for you. You and you alone have to do the work.

Third, you can develop resilience. Resilience cannot be purchased or given to you; you have to do the hard work of building excellence in your life.

Basically, resilience isn’t all that different from love. It’s a commitment to turn pain into progress. 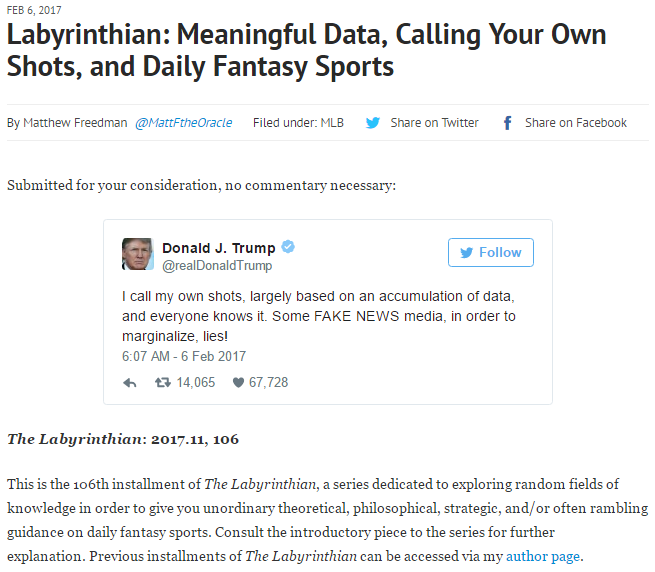 . . . but I figured that you’ve probably had enough articles from me on facts and data and imagination and truth.

Also, shout-out to President Trump on his marginalize/lies rhyme. Sources say he and Kanye West plan to collaborate on a record. The working title is #AlternativeRaps. They expect it to debut higher than No. 1.

This might seem anticlimactic, but I think DFS resilience is basically just a continuance of the eternal process of improvement — the dedication to become better by grinding out those 10,000 hours.

DFS resilience is the decision to keep walking the labyrinth of enlightenment.

This is the 106th installment of The Labyrinthian, a series dedicated to exploring random fields of knowledge in order to give you unordinary theoretical, philosophical, strategic, and/or often rambling guidance on daily fantasy sports. Consult the introductory piece to the series for further explanation. Previous installments of The Labyrinthian can be accessed via my author page.

Form Follows Failure: How to Improve at Daily Fantasy Sports

Labyrinthian: A Year in the Life of a Daily Fantasy Sports Writer

Labyrinthian: Luck, Talking Like a Brit, and Daily Fantasy Sports