If you’re unfamiliar with the single-game NFL DFS format, it differs a bit on DraftKings and FanDuel. On DraftKings, you have one “captain” spot and five flexes. The captain will score 1.5x fantasy points, but he also costs 1.5x salary. That means if you want to roster Jared Goff at captain and take advantage of the scoring boost, you’ll have to pay $16,200 as opposed to $10,800.

FanDuel’s single-game format features one “MVP” spot and four flexes. The MVP also scores 1.5x fantasy points, but he doesn’t cost any additional salary. That takes away a bit of the strategy and makes the goal simple: get your highest-scoring player in the MVP spot.

Goff is the most expensive player on the slate, and he should be a popular choice for the Captain spot. He leads all players in our NFL Models in projected points and ceiling in a strong matchup. The 49ers’ defense has not matched their production from last season, and it currently ranks just 23rd in Football Outsiders’ pass defense DVOA. They’ve struggled from a fantasy perspective as well, giving Goff an Opponent Plus/Minus of +2.6 on DraftKings.

The Rams also own the edge in the contest from a Vegas perspective. They’re currently three-point favorites despite playing on the road, giving them a superior implied team total.

The only real concern for Goff is his drastic home/road splits throughout his career. Goff has averaged a Plus/Minus of +1.78 at home since the start of the 2017 season, but that mark drops to -0.17 on the road (per the Trends tool).

George Kittle is the most expensive option on the 49ers’ side, and he’s had a disappointing start to his season. Injuries have kept him out of the lineup for two of the first five weeks, and he’s only posted a positive Plus/Minus in one of his first three contests. He went berserk in that contest, recording 15 catches for 183 yards and a touchdown, but that game came with Jimmy Garoppolo out of the lineup.

Kittle is in a tough spot tonight given the Rams given his Opponent Plus/Minus of -2.6. The Rams’ defense currently ranks third in pass defense DVOA, although it does rank merely 11th in DVOA vs. the TE position. Kittle stands out in particular on FanDuel given his Bargain Rating of 89%.

Garoppolo is cheaper than the typical starting QB in the single-game format, but with good reason. He played so poorly in his last game that he was actually benched for C.J. Beathard. That said, he practiced in full this week and reportedly looked healthier, according to head coach Kyle Shanahan.

This could be a nice buy-low spot for Garoppolo, who is the rare QB who has historically performed better as an underdog than a favorite. He has only played as a home underdog once during his tenure with the 49ers, and he responded with a Plus/Minus of +7.49. The 49ers love to run the ball when they have a lead, so the game script could work in Garoppolo’s favor tonight.

Raheem Mostert is another potential stud option for the 49ers. They have a crowded backfield when fully healthy, but that isn’t the case at the moment. Tevin Coleman won’t return until Week 7 at the earliest, while Jeff Wilson is listed as questionable. That leaves Mostert to handle the lion’s share of the RB touches.

Mostert played on just 48% of the 49ers’ offensive snaps last week, but that number shouldn’t be taken out of context. The 49ers trailed for most of that contest, so there was no need to lean too heavily on Mostert in his first week back in the lineup. Regardless, he still finished with 14.9 DraftKings points thanks to 90 yards on 11 carries. He should see a larger workload today and has the potential to take any touch to the house:

Raheem Mostert reached a top speed of 23.09 MPH on this 80-yard TD run, the fastest speed reached by a player over the last three seasons (since 2018).

Mostert is responsible for the two fastest speeds this season — He reached 22.73 MPH in Week 1.#FTTB | Powered by @awscloud pic.twitter.com/2h2jOtJGdP

This area is dominated by the Rams.

It starts with their WR duo of Cooper Kupp and Robert Woods, both of which can go off in any contest. Kupp has been Goff’s preferred target recently, logging at least seven targets in each of his past three games. He’s only posted a positive Plus/Minus once this season — Week 3 against the Bills — but he went off for 28.7 DraftKings points in that contest.

He should benefit from one of the best matchups of the week against 49ers slot cornerback Jamar Taylor. Taylor has been one of the worst cover corners in the league to start the season, giving him a Pro Football Focus grade of just 42.8. Overall, Kupp has one of the biggest edges of week against his opposition from a PFF perspective, which makes him very appealing at his current price tag.

Woods’ matchup isn’t as appealing, but he’s still a viable target. He leads the Rams in red-zone targets this season, which gives him a bit more upside than Kupp from a touchdown perspective.

Stacking the Rams’ passing game seems like an appealing option, but you should probably choose just one of Kupp or Woods in most of your lineups. Those players have a correlation of -0.16, so it seems like one needs to fail for the other to succeed. Thankfully, you can build a rule into our multi-lineup tool to decrease your exposure to one player whenever the other is in your lineup: 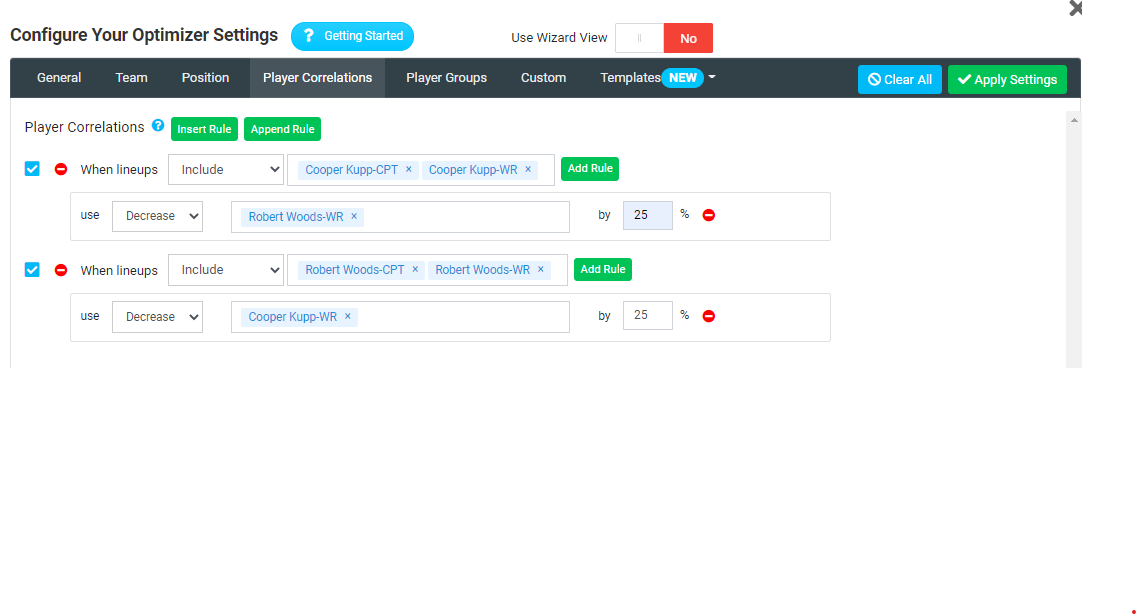 The next big decision you have to make on this slate is how to approach the Rams’ running backs. Darrell Henderson is the most expensive option, and he’s scored at least 20.1 DraftKings points in three of his last four games. That said, this is still a three-man committee. Henderson led the team in snaps and carries last week, but it was by a slim margin. Rookie second-rounder Cam Akers was more productive than Henderson with fewer touches, so it wouldn’t be a surprise to see him eat into Henderson’s workload in today’s contest. That makes Henderson risky at his current salary.

Tyler Higbee is another potential option for the Rams, although he has been a major disappointment this season. He did manage to score three touchdowns against the Eagles back in Week 2, but that was the only game this season in which he scored more than 8.0 DraftKings points. Still, he was on the field for 82% of the Rams’ offensive snaps last week, so he has the potential to put together a better performance tonight.

Finally, the 49ers have two wide receivers to consider in this price range: Deebo Samuel and Brandon Aiyuk. Samuel was limited to just 25 snaps in his first game this season, but he was basically back to a full workload last week. He finished with eight targets in that contest, which was tied with Kittle for the top mark on the team.

Aiyuk only saw six targets in that contest, but he led the team in snaps. He played on a whopping 97% of the 49ers’ offensive plays, and he has shown the ability to contribute as a receiver and a runner to start the year.

Unfortunately, both players have dreadful matchups against the Rams. Samuel is expected to see a bunch of snaps across from Jalen Ramsey, who is one of the best cornerbacks in football. Aiyuk’s matchup against Darious Williams is no picnic either: Williams actually has a better PFF grade than Ramsey to start the year.