DeMar DeRozan has worked his way into the hearts of Canadians one mid-range jumper at a time. He’s been balling out since his game took a leap in 2013, but this year’s version of DeRozan is the best yet. Overall, he’s averaged a career-high 27.6 points and 5.4 rebounds per game through 63 games. DeRozan still shoots fewer than two 3-point attempts per game, although his 48.2 percent mark on 2-point field goal attempts is a six-year high. The result of his new-found efficiency has been a career-high 41.46 DraftKings points per game (PPG).

DeRozan averaged between 20 and 23.5 points during each of the past three seasons. His efficiency has improved this year, but the real reason for his increase in scoring has been his featured role in the offense. DeRozan’s average of 21 field goal attempts per game is more than three shots higher than his previous career high. But despite being a shoot-first guard, he’s continued to generate opportunities for his teammates. Overall, DeRozan has averaged between 3.5 and 4.0 assists during each of the last four seasons.

The Raptors have struggled away from the Air Canada Centre during recent playoff runs, as they’ve won just three of their 14 road playoff games since 2014. DeRozan has indeed played better at home over the past three seasons, but his splits aren’t as severe as you might expect:

Per our Trends tool, we see that he’s averaged 1.08 more DK PPG at home than on the road over the past three seasons. DeRozan’s Consistency at home is 10 percentage points better than it is on the road, but it’s clear that he’s been solid wherever the Raptors have played — especially this season:

DeRozan has actually been better on the road through 63 games this year. Still, the public appears to be under the impression that DeRozan is a better DFS option at home, as he’s been owned in just 15.1 percent of lineups during the Raptors’ road games. Look to feature DeRozan away from the Air Canada Centre, where his ownership is reduced but his abilities are undiminished.

Specifically, Pro subscribers should be sure to review DeRozan’s ownership via our DFS Ownership Dashboard to see if there’s a difference in the way that he’s rostered in high- vs. low-stakes guaranteed prize pools.

The Raptors won’t be mistaken for the Cavs or Warriors anytime soon, but they’ve still won 48-plus games during three consecutive seasons and are undoubtedly a top-four team in the East when they’re healthy. As a result, the Raptors are sometimes heavy favorites, and DeRozan has struggled to meet his salary-based expectations under those circumstances:

He’s posted a -1.05 Plus/Minus with 46.7 percent Consistency and has averaged just 34.31 DK PPG during his 30 games as a double-digit favorite over the past three seasons. DeRozan’s tendency to focus on 2-pointers is fine thanks to his large shot volume, but it’s problematic in games in which his time on the court might be limited.

The Raptors finished last season as the second-best team in the Eastern Conference, although they’ve fallen behind the Celtics and Wizards in the standings this season. Still, DeRozan has continued to ball out against the league’s elite opponents:

His averages against opponents with win percentages of 60 percent or more are great, but his reduced ownership is what really stands out. We’ve now seen that the public think less of DeRozan on the road and against elite opponents. He deserves enhanced consideration in GPPs in such situations.

As is the case with most players, DeRozan has shown severely different splits in back-to-back series depending on whether he’s at home or on the road:

DeRozan has been splitting the court and sharing the ball with point guard Kyle Lowry since 2012-13. Lowry’s wrist surgery is expected to sideline him for the rest of the regular season. DeRozan has played only six games as the team’s undisputed alpha dog, and he’s continued to play well:

The six-game sample is small, but DeRozan has continued to surpass his implied point total without Lowry on the court. DeRozan has actually taken slightly fewer shots per game without Lowry this season, although it seems unlikely that trend will continue. The key data point to note in this trend is DeRozan’s ownership, which has jumped up to 23 percent.

Without Lowry, DeRozan has become a very chalky player.

Pro Subscribers can see in more detail exactly how DeRozan has performed without Lowry via our On/Off tool.

DeRozan’s salary has been fairly volatile this season on DK, as he’s reached a low of $7,200 and a high of $9,300. He was priced in the low $8,000s during early February, but his salary has skyrocketed into the $9,000s since the Lowry injury. DeRozan’s seasonal average of 41.46 DK PPG implies that he should be priced at $9,000. On the basis of what he’s done over the season, he’s a little overpriced currently, but he’s probably still underpriced given what he’s done without Lowry in the lineup.

DeRozan’s FanDuel salary has reached a low of $7,500 and a high of $10,200 this season. He reached his season-high $10,200 price tag following the Lowry injury. His average of 39.66 FD PPG implies he should be priced at $8,900. DeRozan’s difference in his actual salary versus his implied salary is more prominent on FD than DK, as illustrated by his 99 percent DK Bargain Rating for the 3/8/2017 slate.

Unsurprisingly, we see that not many relevant Raptors have benefited from DeRozan’s presence on the court this season:

All four players to post the best DK Plus/Minus differentials with DeRozan have averaged fewer than 11 minutes per game with the exception of P.J. Tucker, who has played in just six games with DeRozan since being acquired from the Suns. He’s currently averaging just 5.3 PPG and won’t be a recommended fantasy option on most nights.

When DeRozan has been sidelined, some Raptors have performed better:

Deion Wright and Pascal Siakam have both averaged fewer than 17 minutes per game this season, although both Jonas Valanciunas and Lucas Nogueira are regular players. Nogueira has shown flashes of fulfilling his potential as a seven-foot rim-protecting center, but he’s failed to score more than 13 points during a game this season and won’t be a fantasy option on most nights. Valanciunas has averaged 26 minutes per game and has scored 12 points and grabbed 9.5 rebounds per slate. With Lowry out of the equation, look to feature Valanciunas anytime that DeRozan is sidelined.

The next three On/Off queries suggest the extent to which DeRozan picks up the offense’s slack when one of the team’s featured players is forced to miss time:

If we exclude Jared Sullinger, who has averaged fewer than 11 minutes per game this season, we see that DeRozan has posted a team-high DK Plus/Minus differential when Lowry, DeMarre Carroll, or Valanciunas has been sidelined. His usage has also increased in those instances. DeRozan is in play whenever another key Raptor misses time.

Below is the average production for the Raptors during DeRozan’s 10 best fantasy performances of the past two seasons, first on FD and then on DK. 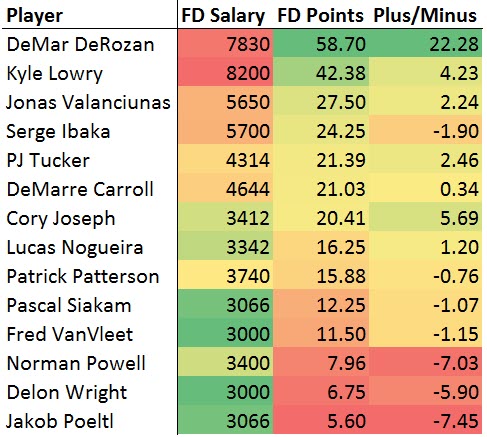 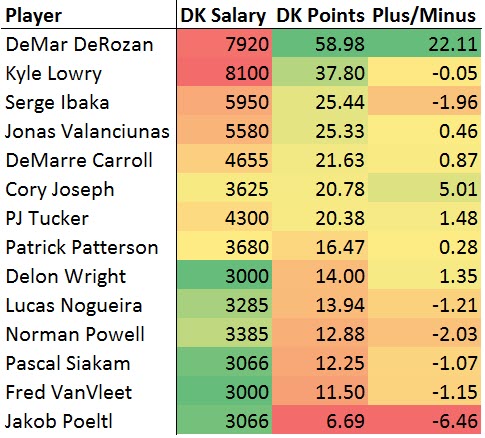 DeRozan has been a bit more stack-friendly on FD versus DK during his top-10 fantasy performances of the past three seasons. Cory Joseph is the most intriguing candidate to stack with DeRozan, as he’s balled out during DeRozan’s top-fantasy performances. Additionally, Joseph has played 32-plus minutes during five of the six games without Lowry. DeRozan’s score-first mentality doesn’t necessitate he be stacked with a teammate, but Joseph and Valanciunas have been his two best stacking options to date.

DeRozan’s quest to become Canadian Kobe isn’t incredibly far-fetched. His devastating mid-range game gives him a high floor, as he’s scored fewer than 20 points in just seven of his 56 games this season. DeRozan’s consistency has allowed him to post mostly agnostic splits over the years, allowing him to provide value on the road, against strong opponents, and in the second game of B2Bs at home.

The loss of Lowry has placed the Raptors’ scoring burden firmly on the shoulders of DeRozan. Through six games he’s appeared to be more than up to the task, but his ownership has also skyrocketed without Lowry in the lineup. Still, we’ve seen DeRozan thrive whenever a marquee teammate has left the floor this season. Take advantage of this aspect of DeRozan’s game if his salaries regress from their current season-high levels.