Freedman: Antonio Brown Is Falling Off a Cliff and No One Cares

UPDATE (12/24): In Week 16, at the Coors Field of fantasy football (the Superdome), with fellow wide receiver JuJu Smith-Schuster playing through a groin injury, Antonio Brown had an utterly triumphant, in-your-face 14-185-2 receiving performance on 19 targets.

On the Wednesday edition of The Action Network NFL Podcast, my bold call was that Brown would have a 100-2 performance.

UPDATE (12/17): In Week 15, Antonio Brown had four receptions and 49 yards on seven targets, saving his day with a touchdown. Is Brown actually falling off a cliff? No. I said that for dramatic effect. But he’s on the precipice. Brown is no longer a top-10 wide receiver.

UPDATE (12/10): In Week 14, Antonio Brown had a 5-35-0 performance on seven targets in a 24-21 loss to the Raiders, who entered the game ranked dead last in Football Outsiders’ pass-defense DVOA, while fellow wide receiver JuJu Smith-Schuster went off for 8-130-2 receiving on 12 targets.

Since his 2011 breakout campaign, Steelers wide receiver Antonio Brown has averaged an obscene 1,409 scrimmage yards per year. Since 2014, he’s been a first-team All-Pro every season. Last year, he led the league with 109.5 yards per game and 15.2 yards per touch. And this year, he currently leads the league with 11 touchdowns receiving.

He’s been the best wide receiver in the league for the past half decade, and he’s perhaps the closest this generation will get to Hall-of-Fame wide receiver Jerry Rice.

But here’s the problem: There’s a chance that Brown is no longer good at football.

As I write this in Week 13 of the 2018 season, the 7-3-1 Steelers are slated to host the 8-3 Chargers in what should be an exciting Sunday Night Football game. 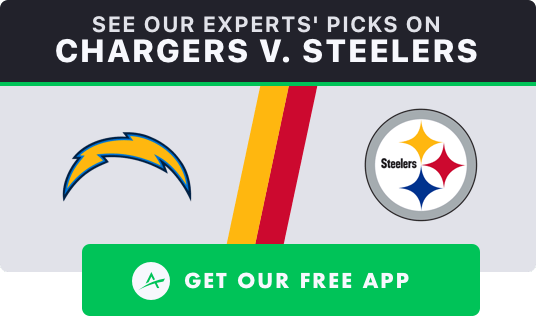 Brown will likely be a popular player in primetime and single-game daily fantasy contests. After all, Brown is known as a great player. From 2014-17, Brown led all wide receivers with 24.3 DraftKings points per game. He hit his salary-based expectations in 60.7% of his 61 games played.

And as a home favorite — the Steelers are currently favored by three points — Brown was unbelievable over the past four seasons, putting up 30.3 DraftKings points on 8.7 receptions, 121.8 yards receiving and 1.12 touchdowns per game. Brown’s +8.96 Plus/Minus as a favorite at Heinz Field was astronomical.

But that’s the past.

This year, Brown is having a very different type of season. He’s third in the league with 122 targets and first with 17 end-zone targets. That’s great, and with that usage, it’s not surprising that he’s tied for the NFL lead with 11 touchdowns receiving.

But Brown is tied for 10th with just 71 receptions. He’s 14th with 874 yards receiving. Given that he’s only three targets off the league lead, those numbers are embarrassingly low.

Even though the league is on pace to set all-time highs this year with 24.1 points, 360.6 scrimmage yards, 20.7 first downs, 22.8 receptions, 247.3 yards receiving and 1.8 touchdowns receiving per game per team — and even though the Steelers are first in the league with 477 pass attempts — Brown’s DraftKings average has dropped to 21.2 points per game this season.

Somehow, with all his targets and touchdowns, he’s not in the top-six at his position in fantasy scoring.

What happens in the future if (or when) Brown pulls a 2017 Jordy Nelson and stops scoring touchdowns at an unsustainable rate? 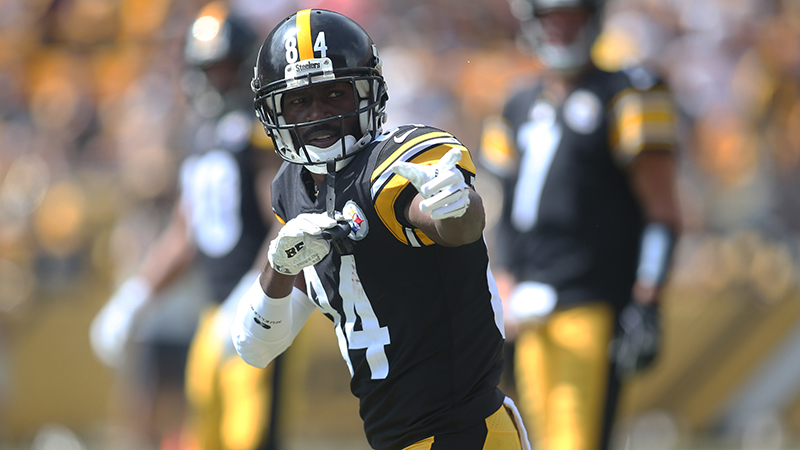 Brown vs. His Teammates

In fact, of any Steelers pass-catcher targeted more than 25 times by Roethlisberger this year, Brown has been the least efficient with his targets (per the RotoViz AY/A app).

Is This a Big Ben Problem?

Is it possible that Roethlisberger is the one to blame for Brown’s decline?

After all, JuJu has dropped from a 13.0 AY/A last year to a 9.4 this year. Of course, his 2017 mark also was totally unsustainable: It’s not surprising that he’s seen some second-year regression. As it is, he’s still been way more efficient than Brown on a significant number of targets.

And what about the other pass-catchers?

If we look at Pro Football Focus’ passing data, we see that this year Roethlisberger is 24th among all quarterbacks in accuracy rate. That’s not good. At the same time, it’s actually right in line with (and slightly better than) what we’ve seen out of Roethlisberger over the past couple of years.

In general, it looks like Roethlisberger isn’t worse as a passer than he has been in the recent past. Brown’s decline might not be a Big Ben problem. 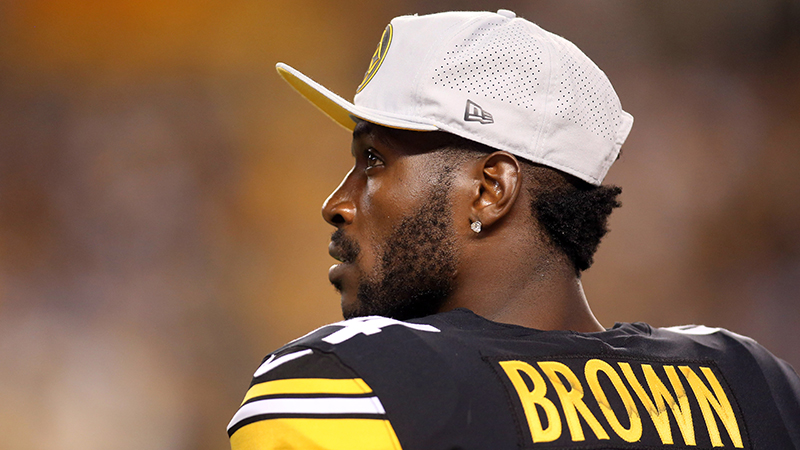 Is Something Wrong With the Roethlisberger-Brown Connection?

Maybe Brown is just as good as he has been in previous seasons, and maybe Roethlisberger isn’t any less of a passer. Maybe something is just off in their connection for some random reason.

But what does that mean?

I’ve combed through enough of the PFF data to see that in many instances subpar receivers have elevated uncatchable target rates.

For instance, third-round rookie James Washington (56.5%). It’s not as if people are blaming Roethlisberger for the young wide receiver’s first-year struggles. On the whole, Roethlisberger is just as accurate this year as he was last year and the year before that. It’s possible — and maybe probable — that Washington’s struggles have more to do with Washington than with Big Ben. 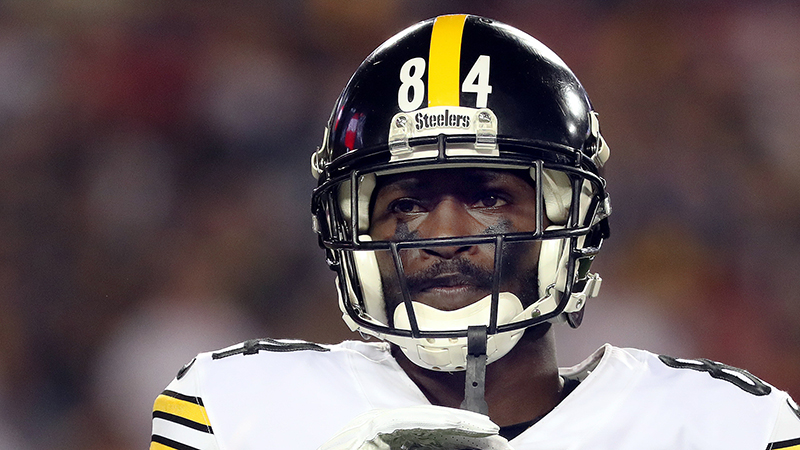 Is Antonio Brown No Longer Good at Football?

Almost no one is talking about Brown’s newfound receiving inefficiency because he’s compensated for it with enhanced touchdown production, but make no mistake: Brown’s not having just a bad year for him. On a per-target basis, he’s having a bad year for anyone.

It’s possible that what we’ve seen so far is merely a short-term anomaly. Brown could certainly progress to his career averages as the playoffs approach and the regular season ends.

But it’s also possible that, at the age of 30, he’s starting to slow down. Not since his injury-impacted 2012 season has Brown had a receiving average as low as his 79.5 yards per game. From 2011-17, Brown had 120-plus yards receiving in 25 games, hitting that threshold at an obnoxiously high 23.6% rate.

This year, in 11 games, he’s failed to hit that mark once.

In fact, it’s possible that Brown’s slowdown subtly started last year. Based on the RACR metric created by Josh Hermsmeyer of FiveThirtyEight and 4for4, Brown’s inefficiency isn’t just a one-year issue.

RACR is an efficiency metric that measures how effective a receiver is at transforming his targets and air yards into receptions, yards after the catch and ultimately receiving yards.

In 2014, Brown was wonderfully efficient given his massive volume, turning every air yard into 0.91 receiving yards. Since then, though, his yardage-based efficiency has steadily declined. Now, he’s literally the least efficient RACR receiver on the Steelers with more than 25 targets.

It’s possible that Brown’s slowing down.

But it’s also possible that he isn’t.