Week 5 AAF DFS Breakdown: Can Anyone Slow Down Charles Johnson?

We’re on to Week 5 of the Alliance of American Football league, which means we once again have the luxury of competing in the glorious pastime known as daily fantasy football.

Be sure to check out this week’s betting guide later in the week for specific Week 4 takeaways along with relevant matchup and injury notes.

We’re going to change up the format a bit this week in an effort to better grasp where the value lies in the slate. Here’s a key to the table below that features the following information for every player included in our FantasyLabs AAF Fantasy Rankings.

The big four quarterbacks at the top of the pricing scale have each shown stretches of strong play this season.

Garrett Gilbert ($6,800) is plenty deserving of the highest salary even in a tough matchup thanks to the Apollos’ ridiculously efficient passing game. I’m leaning toward John Wolford ($6,000) in our next tier over Zach Mettenberger ($6,100) or Aaron Murray ($5,900), though, thanks to Wolford’s superior matchup at home against the Commanders’ league-worst defense.

Josh Woodrum ($5,700) has helped steady Salt Lake’s briefly sinking ship, but his reliance on getting the ball out quickly, check-downs and lack of dual-threat ability hasn’t translated to a productive fantasy player. Meanwhile, Luis Perez ($5,300) and Logan Woodside ($5,500) have consistently demonstrated low-floor/ceiling outcomes.

Mike Bercovici ($5,000) is a viable play this week with San Diego starter Philip Nelson (fractured clavicle, IR) sidelined for the foreseeable future. Bercovici looked awful in Week 1, but his price tag is at least $500 too cheap considering Alex Ross ($5,600) replaced Nelson after the injury occurred and was priced as if he’d be the starter.

FanBall’s pricing has drastically changed from Weeks 4 to 5 when it comes to the league’s starting running backs.

Jhurell Pressley’s workload seems to be the most secure among our top four starers who saw the highest price increases, but that’s still a fairly outrageous one-week increase considering his consistent usage.

Zac Stacy and Trent Richardson are tentatively locked in as their offense’s lead backs despite their respective sub-par performances in Week 4.

No running back in Atlanta or Orlando appear to offer much value at their respective price tags considering the general uncertainty surrounding both backfields.

Ja’Quan Gardner’s usage didn’t change in Week 4; just his production. It’s unclear whether Gardner or Terrell Watson will be more affected by the return of Bishop Sankey, but it’d be surprising if Gardner is suddenly phased out of the offense after looking like the Fleet’s most explosive player in Weeks 1-3. 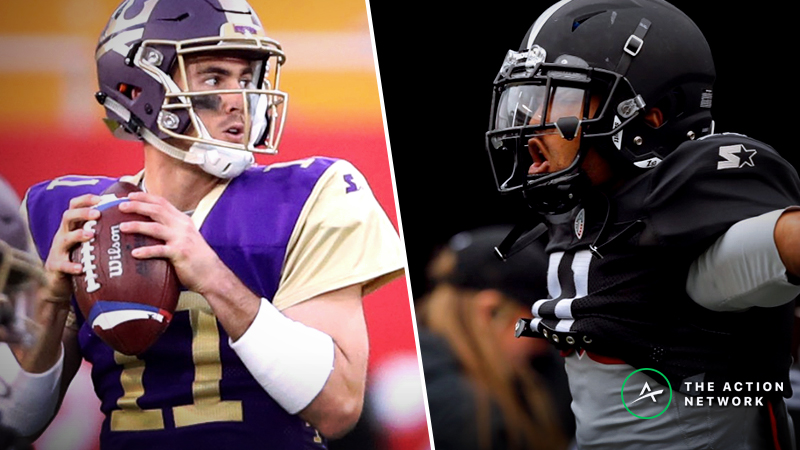 The value at wide receiver should help daily fantasy players to pay up at either running back or quarterback. Freddie Martino, L’Damian Washington, Dontez Byrd, Alton Howard, Brian Brown and De’Mornay Pierson-El are all viable cost-saving options who are expected to start in their respective offense’s 3-WR sets.

There’s also plenty of value in San Antonio, as Mekale McKay and Greg Ward Jr. have averaged 7.5 and 5.5 targets per game, respectively, but offer reduced price tags thanks to Woodside’s general incompetence under center.

It’ll be tough to invest in any Atlanta receivers as long as they’re utilizing a seven-man rotation. Ervin Philips might be the best bet for success considering he led the way with a 53% snap rate last week and is only $3,200. The Legends’ passing attack showed renewed life with Aaron Murray under center for most of Week 4.

It remains to be seen whether T-Rich’s reduced snaps in Week 4 are a sign of future change, but his reduced price tag makes him more feasible to target among the slate’s big-three backs.

I’m also inclined to continue to ride the Garrett Gilbert-Charles Johnson combination until someone proves capable of stopping it. This obviously stretches the salary cap a bit thin, so we’ll need to reserve one of the flex spots for a low-priced option. The best bets for touches among players priced under $4,000 include …

Including two of these players lets us finish the lineup with one of the slate’s under-priced studs between Ja’Quan Gardner ($5,600) or Quinton Patton ($5,500).

Riding with Mike Bercovici ($5,000) gives users monstrous room to include some of the slate’s top receivers and running backs. Still, I’m more inclined to ride with John Wolford ($6,000) in his dream matchup considering how much better the Arizona offense has generally been than San Diego this season.

It’s usually not a great idea to chase steep price hikes in daily fantasy at any position. Taking a chance on the following running backs who haven’t experienced massive changes in salary over the last week is my preferred method of saving money in tournaments while still maintaining some roster flexibility.

Starting AAF RBs and their change in salary from Week 4-Week 5:

Charles Johnson ($7,900) and Rashad Ross ($7,400) are deserving of their massive salaries, but pivoting to one of Arizona’s complementary receivers or Jalin Marshall ($5,400) could perhaps help differentiate lineups.

There’s also plenty of low-cost options at wide receivers who can be utilized in flex spots to open up more salary elsewhere. I like the following wide receivers thanks to their cheap salary and high Week 4 snap count.

Notable $5K-or-cheaper AAF DFS WRs that played at least 70% of their offense's snaps in Week 4: