Before we shift our focus to the second half of the NFL regular season, let’s break down some key fantasy football performances from Sunday’s slate.

The following four players were the brightest stars at their respective positions in Week 9.

The Falcons are now winners of three straight after dispatching the Redskins, 38-14. Ryan was brilliant, completing 26-of-38 passes (68%) for 350 yards and four touchdowns with 9.2 yards per attempt.

The former league-MVP is making another case for offseason awards through nine weeks:

Ryan has thrown for at least three touchdowns in four of his past six games and is regularly forced to participate in offensive-minded shootouts thanks to the Falcons’ injury-riddled defense.

Matty Ice’s command of the offense was so strong on Sunday that he even managed to help Julio Jones finally score a touchdown.

In addition to Jones, who finished with seven receptions for 121 yards and a score, Ryan is surrounded by explosive weapons with Calvin Ridley and Tevin Coleman and has sure-handed options in Mohamed Sanu and Austin Hooper.

Up next for the Falcons’ elite offense is a mouth-watering matchup against the Browns.

Fantasy Running Back of the Day: Kareem Hunt

The Chiefs continued to make their opponents look silly during their matchup in Cleveland, but Hunt was the engine that drove the league’s top-ranked scoring attack to yet another 30-plus point performance.

The Chiefs’ bell-cow converted 17 carries into 91 yards and two touchdowns on the ground. He also took a screen pass 50 yards to the house to cap off their opening drive.

Of course, the matchup wasn’t the toughest: The Browns were one of only seven teams allowing at least 30 DraftKings points per game to opposing running back units heading into Sunday. Still, Hunt has at least five receptions or a receiving touchdown in four straight games and carries a sky-high weekly floor as Kansas City’s early-down and goal-line back.

Next up is a return home to Arrowhead Stadium against a Cardinals defense that joins the Browns in the aforementioned fantasy-friendly run defense club.

Things hadn’t been great for Thomas entering Week 9, as he followed up his PPR WR1 performance in Weeks 1-3 with WR39 production in Weeks 4-8. He turned things around in a major way against the Rams, catching 12-of-15 targets for a career-high 211 yards and a game-ending 72-yard touchdown.

No. 1 receivers have more-or-less had their way with the Rams ever since Aqib Talib (ankle, IR) and Marcus Peters (calf) were banged up in Week 3.

Having the rest of the offense play at an elite level also helped Thomas dominate. Drew Brees finished the day with 346 yards and four touchdowns through the air, while Alvin Kamara exploded for 116 total yards and three touchdowns. 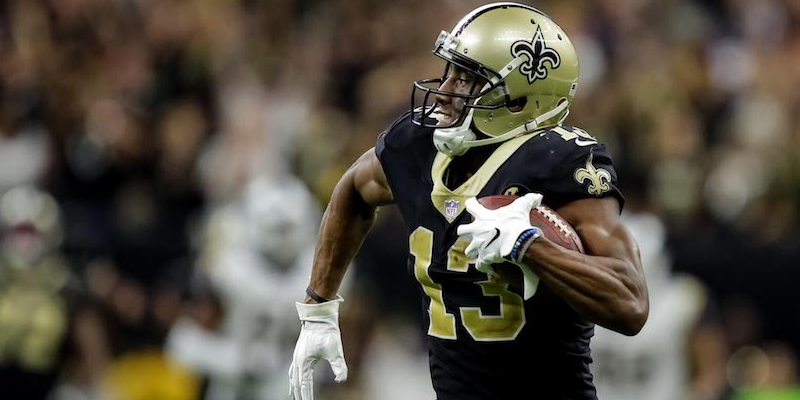 The Saints won’t get to benefit from the high-scoring Superdome atmosphere next week when they travel to Cincinnati, but they shouldn’t have too many problems against the Bengals’ 25th-ranked defense in Football Outsiders’ overall DVOA.

Kelce was the focal point of the Chiefs’ aerial attack, and the team’s stud tight end accordingly converted a team-high nine targets into a sterling 7-99-2 line against the Browns’ overmatched secondary.

Kelce has dominated for the better portion of his career, but he’s been even more dangerous with Patrick Mahomes under center:

Defenses must respect the field-stretching abilities of Tyreek Hill and Sammy Watkins on the outside, while Hunt’s aforementioned success on the ground is another weekly force to be reckoned with. Still, Kelce has made a case as the most important piece of Kansas City’s pass game and leads the team in target share (25%) while ranking behind only Hill in air yard market share (26%).

Kelce is as matchup-proof as any player in the league at this point, and the Cardinals’ 24th-ranked defense in DVOA against tight ends is hardly a unit to fear.

Cam Newton completed 19-of-25 passes for 247 yards and two touchdowns en route to the Panthers’ 42-28 win over the Buccaneers.

Many (including myself) were skeptical of offensive coordinator Norv Turner’s ability to quickly produce an effective offense that would best utilize the unique talents of Newton, but the early returns have been nothing short of spectacular:

Turner’s new-look scheme has emphasized getting the ball out of Newton’s hands more quickly without taking away what makes him special. Overall, Newton leads all quarterbacks in rushing yards (342) and touchdowns (4).

The product to this point has been the second-most productive offense of Newton’s era.

Hue Jackson had a frustrating habit of never feeding Johnson touches despite Johnson’s yearly status as one of the league’s most-efficient backs. Overall, Johnson has ranked among the league’s top-eight running backs in yards per touch over each of the past three seasons (minimum 20 touches).

New offensive coordinator Freddie Kitchens was more than willing to embrace Johnson’s versatility against the Chiefs, as he had a team-high nine targets and managed to surpass his season-high in receptions by halftime.

When all was said and done, Johnson tied a career-high with nine receptions and converted those opportunities into 78 yards and two touchdowns.

The Browns’ newfound willingness to embrace Johnson’s receiving ability is obviously a positive, but it remains to be seen whether this will become a weekly occurrence, or if Sunday was just a blimp on the radar.

Luckily, next week’s matchup against the Falcons is a dream spot for Johnson. Atlanta has allowed the most receptions to opposing running backs in every season since Dan Quinn took over as head coach in 2015.

Can Anybody Stop James Conner?

The Steelers’ featured back continues to run all over anybody and everybody standing in his path. The Ravens held Conner to 34-scoreless yards on 12 touches in Week 4, but he exploded for a 24-107-0 rushing and a 7-56-1 receiving lines against Baltimore in Pittsburgh’s 23-16 win.

Every move Conner has made this season has understandably been compared to Le’Veon Bell, and the second-year back has largely been the better player through nine weeks.

Conner led the league in forced missed tackles entering Sunday, and he joined Ezekiel Elliott and Todd Gurley as the only backs with double-digit runs of 15-plus yards. Conner is a true three-down running back and deserves to be mentioned alongside the league’s best.

Up next for the Steelers’ stud back is a Thursday night matchup against Luke Kuechly and the Panthers at Heinz Field.

I highlighted Allen’s potential for a second-half renaissance in Week 7, and again this week with some help from our FantasyLabs NFL Trends Tool.

The Chargers’ No. 1 receiver caught 6-of-10 targets for 124-scoreless yards against the Seahawks while pitching in 28 rushing yards on two carries. Allen leads the team in both target share (28%) and air yard market share (29%) through nine weeks. He was one of only 13 receivers with a target share of at least 25% heading into Week 9.

Allen is set up well next week against the Raiders’ disastrous secondary. He’s regularly balled out against Oakland throughout his career.

Keenan Allen Career vs. the Raiders

Hurt in Battle and Returning Soldiers

There were plenty of key injuries on both sides of the ball this week. We won’t know more about Week 10 availability until later in the week, but the following skill-position players will certainly be worth monitoring: