Who Cares About The New Extra Point Rule? 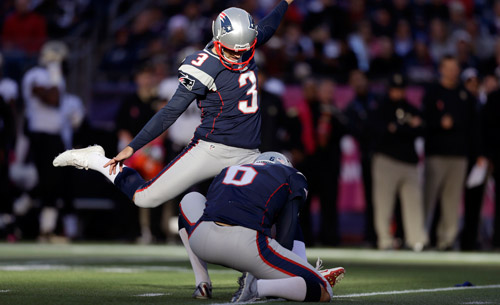 As I’m sure you’ve heard by now, the NFL is changing the distance from which extra points will be attempted this season. In 2015, an extra point attempt will be equivalent to a 32-33-yard field goal attempt. Not many people spend a ton of time breaking down kicker matchups on FanDuel (just go with a cheap kicker with a high Vegas total) and DraftKings doesn’t even use the kicker, so who cares, right?

Well, that’s what I’m anticipating the popular attitude to be within DFS circles, but you could use this new rule to your advantage. Now, at this point, we don’t know for sure how often teams are going to go for it, if certain teams are going to go for two points more often than others, or really how it’s all going to play out. All we have right now is some anecdotal thoughts from a few coaches around the league, at best.

But let’s play this thing out for a second. By giving the rule change a little thought, maybe we can adapt more quickly than “the field.” According to ESPN, over the last three years, kickers have completed 32-33 yard field goals at a 94.4% clip. Team Rankings shows some kickers were better than others (see below for the worst ones), but overall, kickers are pretty accurate from this distance:

We’ll start with FanDuel because they actually have kicker as a position, so this is most relevant there. Overall, kickers fare worse in Plus/Minus as the season goes on and the weather starts to get colder, as you can see here:

If I start adding cold temperature or high wind filters, I can get those Plus/Minus numbers even lower:

When the weather is unfavorable, maybe more teams will attempt a two-point conversion after a touchdown. Field goals are the bread and butter for kickers, so can a kicker still be valuable if they lose one or two FanDuel points from extra point tries? If you’re Stephen Gostkowski in 2014, sure. If you aren’t, not so much:

On FanDuel this year, kickers have a pricing floor of $4500, just like last year, and after scanning the prices overall, it doesn’t look like the new PAT rule has affected kicker pricing yet. This will make it very hard for kickers to reach value if their offense goes for two once or twice in the game. So who’s picking up those points? A player who rushes or receives a successful two-point conversion would get 2.2 points, while a QB who passes for one would get a shade over 2.0 points on both DraftKings and FanDuel.

Last season, Russell Wilson and Cam Newton tied for the league lead in rushing TDs at the QB position with five apiece. Just for argument’s sake, let’s say that in 2015, they each convert a two-point conversion once every other game. Believe it or not, that extra 1.1 point per game would have just about brought Cam Newton to even value on the year (finished 2014 at -1.17). Russell Wilson would have moved up to around +4.50 on DraftKings.

For running backs, DeMarco Murray and Marshawn Lynch led the league last year in red zone TDs. Both finished with positive Plus/Minus scores on DraftKings and an additional 1.1 pts per game for Murray would have made him one of the top overall values (keyword: value) on the 2014 season. Compared to the end of the season prices from 2014, Marshawn Lynch is priced exactly the same on DK at $7300 ahead of Week 1. Obviously, there is other stuff to consider with Murray, but his price is way down. Will increaed two-point conversion opportunities be priced in at some point down the road? It’s possible, but right now, they do not appear to be.

Until the real games start, there’s going to be a lot of guesswork involving how teams are going to adapt to the new PAT rules. Are teams that are trailing going to go for two more often? What if they’re trailing by 15+ points, what if they’re trailing in the fourth quarter? What if it’s cold or windy? What if they have a new kicker and a solid goal-line back? There’s a lot to consider and although I don’t have many answers right now, I’m fairly certain this is something that will be DFS-relevant at some point soon. There will be an advantage to be gained by those paying attention.