In this piece, I highlight tight ends who stand out in our large suite of analytical fantasy tools, most specifically our FantasyLabs Models. While our Models are built for daily contests, this is an all-purpose fantasy piece with actionable information for all formats.

Here’s where they place within our Week 7 fantasy football rankings (as of Friday morning).

No tight end in NFL history has more 1,000-yard seasons than Kelce, who has been just as dominant this year as ever at the age of 31.

Kelce leads the Chiefs with 14.7 expected fantasy points receiving per game, a 24% market share of targets and a 0.54 WOPR (per RotoViz NFL Player Statistical Summary).

Since quarterback Patrick Mahomes became the full-time starter in 2018, Kelce has been a fantasy TE1 in 87% of his regular-season games (per RotoViz NFL Stat Explorer). 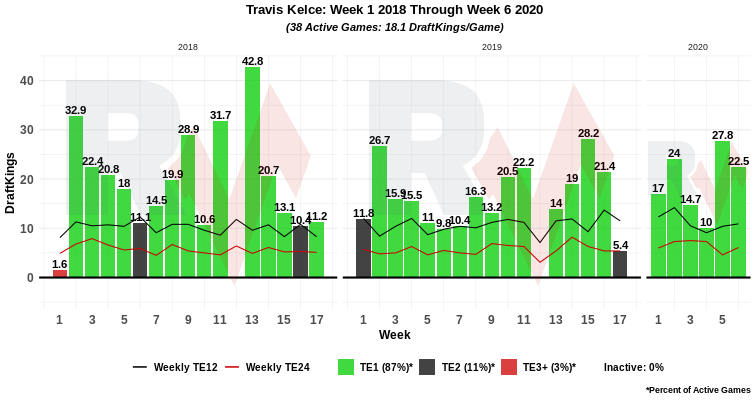 In each season with Mahomes, Kelce has been a top-two tight end in air yards and yards after catch (AirYAC), a leading indicator of fantasy output (excluding players with just one game).

There’s nothing especially notable about Kelce’s matchup with the Broncos, who are No. 14 with a -5.5% pass-defense DVOA against tight ends (per Football Outsiders). But it’s encouraging that the two tight end units with talent comparable to Kelce’s to face the Broncos this year have done well.

And in his two games against the Broncos last year, Kelce was 17-186-0 receiving on 21 targets.

Mahomes should be able to produce against Broncos head coach Vic Fangio’s defense.

And you know I’m betting on the Chiefs. Under head coach Andy Reid, the Chiefs against the spread (ATS) have provided bettors with a good return on investment (ROI) in two distinct situations (regular season, per our Bet Labs database).

In season-long leagues, Kelce is a weekly must-start top-three TE1. He leads all tight ends in our Models with his median, ceiling and floor projections.

In DFS, Kelce is a strong pay-up option for cash games and guaranteed prize pools. Over the past five-plus decade, Kelce has had a 0.76 correlation with his quarterback (per our FantasyLabs Correlations Tool). If Kelce has a big game, Mahomes probably will too. For tournaments, use our Lineup Builder to stack Kelce with his passer.

Kelce is the unanimous No. 1 tight in our Models for DraftKings, where he has a position-high +3.42 Projected Plus/Minus.

Let’s see … it looks like the last time Henry topped some of our Models was Week 14 last year … when he played these same Jaguars. That feels right.

For Henry, this week is much more about the matchup than anything else. It’s not that Henry has had a bad year. He has been perfectly adequate.

But playing the Jags could give him a boost. Henry’s matchup is very good. Opposing tight end units are No. 6 against the Jags with 11.2 fantasy points per game on 25-372-5 receiving.

Each No. 1 tight end to face the Jags this year has had a reasonably high floor.

Against this non-murderers’ row, the Jags have allowed either a touchdown or three receptions and almost 50 yards in every game.

Jacksonville strong safety Josh Jones is a total liability. He has a 40.5 coverage grade and 14-166-2 receiving allowed on 15 targets this year, per Pro Football Focus.

And the Jags are dealing with some injuries in their tight end coverage unit. Top off-ball linebacker Myles Jack (ankle) and starting safety Jarrod Wilson (hamstring) have both missed time this year, and although they played in Week 6, neither one practiced on Wednesday or Thursday, which means both are at significant risk of missing this game. Even if they play, they will not be close to 100% capability.

With this matchup, Henry has a solidly high floor and a potentially high ceiling.

It’s an added bonus that Henry is coming off the bye and is on the positive side of his career-long splits: In his 14 games as a home favorite, Henry has averaged 11.5 DraftKings and 9.3 FanDuel points. If we remove his 2016 rookie season, when he played behind Antonio Gates, those numbers jump up to 13.3 and 10.6 (per our FantasyLabs Trends Tool).

Henry is an upper-tier TE1 in season-long leagues and the unanimous No. 1 tight end in our Models for FanDuel, where he has a position-high 10 Pro Trends.

George Kittle, San Francisco 49ers (+2) at New England Patriots (43.5 O/U): The Patriots are No. 2 with a -49.9% pass-defense DVOA against tight ends and Pats head coach Bill Belichick will do everything in his power to scheme Kittle out of the offense, but Kittle is No. 1 at the position with 106.5 AirYAC and 17.2 expected fantasy points per game. Since his 2018 breakout, Kittle has been a fantasy TE1 in 76% of his games. 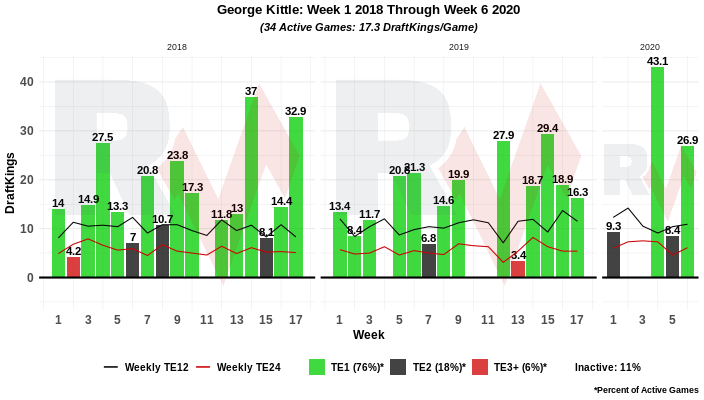 Kittle is the No. 1 tight end in Hayden Winks’ usage model.

Darren Waller, Las Vegas Raiders (+3.5) vs. Tampa Bay Buccaneers (Off the Board): This game might not play because the entire Raiders offensive line is on the COVID-19 list, but the spot is good for Waller. Coming off the Week 6 bye, Waller has a position-high 28% target share and 0.58 WOPR, and the stout Bucs defense is weakest against tight ends, ranking No. 22 with a 12.6% pass-defense DVOA against the position.

T.J. Hockenson, Detroit Lions (+2.5) at Atlanta Falcons (55 O/U): Opposing tight ends are No. 2 against the Falcons with 14.3 fantasy points per game on 40-438-7 receiving with 49 targets. Son of Hocken has a touchdown or four receptions and 50-plus yards in every game this year.

Noah Fant, Denver Broncos (+9.5) vs. Kansas City Chiefs (46 O/U): Despite leaving Week 4 early, Fant is Nos. 4 & 5 at the position with 79.8 AirYAC and 11.5 expected fantasy points per game. Fant (ankle) has been out the past two weeks, but he practiced fully on Thursday and should play. Against the Chiefs last year in Week 15, Fant was 2-56-0 receiving on three targets.

Jonnu Smith, Tennessee Titans (-1) vs. Pittsburgh Steelers (50.5 O/U): With 9.0 yards per target since 2018 and 6.8 targets per game this year in four healthy contests, Smith finally has the volume to match his talent. Smith (ankle) exited Week 6 early but practiced in full on Thursday and should suit up this weekend. In quarterback Ryan Tannehill’s 15 regular-season starts with the team, the over is 13-2 (71.3% ROI). You can bet on this game at FanDuel.

The Steelers are No. 1 with a -50.5% pass-defense DVOA against tight ends, but Smith is still a top-four fantasy producer with 19-234-5 receiving on 29 targets.

Robert Tonyan Jr., Green Bay Packers (-3.5) at Houston Texans (57 O/U): The Packers have a slate-high 30.25-point implied Vegas total, and Tonyan has a position-high five touchdowns. Tonyan (ankle) missed Wednesday and Thursday practice and is uncertain to play, but the Texans are No. 27 with a 23.6% pass-defense DVOA against tight ends.

Darren Fells, Houston Texans (+3.5) vs. Green Bay Packers (57 O/U): Teammate Jordan Akins (ankle/concussion) is still yet to practice and seems unlikely to play this week. In his absence, Fells is 8-142-2 on nine targets over the past two weeks, and he has 11 touchdowns in 23 games (including postseason) dating back to last year.

Eric Ebron, Pittsburgh Steelers (+1) at Tennessee Titans (50.5 O/U): Over his past four games, Ebron has a workable total of 22 targets. With the exception of Dawson Knox, who exited Week 5 early with a calf injury, every starting tight end to face the Titans this year has scored a touchdown.

Dalton Schultz, Dallas Cowboys (+1) at Washington Football Team (46 O/U): Since becoming the full-time tight end in Week 2, Schultz is No. 9 with 10.5 expected fantasy points per game. He was a respectable 4-35-0 receiving on five targets last week with new starting quarterback Andy Dalton, with whom he forms a very natural first/last name stack: “Andy Dalton Schultz.” The Footballers are dead last with a 52.6% pass-defense DVOA against tight ends.

Logan Thomas, Washington Football Team (-1) vs. Dallas Cowboys (46 O/U): I’m contractually obligated to mention LT3, who is tied for No. 7 at the position with six targets per game. Last week he did a passable impersonation of a tight end with 3-42-1 receiving on four targets. The Cowboys have allowed an NFL-high 36.3 points per game to opposing teams.

Ian Thomas, Carolina Panthers (+7.5) vs. New Orleans Saints (51 O/U): The Saints have allowed a league-high 14.9 fantasy points per game to tight ends on 37-367-6 receiving with 54 targets. This game is being played at the Coors Field of Fantasy Football.

The over in Saints games w/ QB Drew Brees:

I look forward to all the incoming mentions about how this information doesn’t matter.

Panthers quarterback Teddy Bridgewater is 15-2 ATS (72.5% ROI) as a road underdog. You can bet on this game at William Hill. None of that has anything to do with Thomas, but that’s pretty much the only good stuff I can say about him.

Anthony Firkser, Tennessee Titans (-1) vs. Pittsburgh Steelers (50.5 O/U): If Smith (ankle) is unable to play, Firkser is an option. He was 8-113-1 receiving on nine targets last week in a largely Smith-less game, and in his eight career games with four-plus targets he has averaged 9.3 PPR and 5.7 STD points (per RotoViz Game Splits App).

Albert Okwuegbunam, Denver Broncos (+9.5) vs. Kansas City Chiefs (46 O/U): If Fant (ankle) suffers a setback and doesn’t suit up, Albert O. is an upside fallback. He was a viable 2-45-0 receiving with an outstanding 113 AirYAC on six targets last week as a Fant fill-in. With his physical profile and draft capital, Okwuegbunam is most comparable to young Jimmy Graham.