The NFL season is back. Week 1 brought a litany of great performances along with several disappointments. Week 2 is my favorite week of the year for fantasy football because it is littered with positive and negative overreactions.

This is a wonderful time of year, so let’s take a deep dive into which players to target and avoid in the second week of the 2021 NFL season.

Prescott ranked as the overall QB7, producing 403 passing yards, three touchdowns, and one interception. In a game with the highest over/under on the slate, he still remains underpriced on both sites. Prescott sits as the QB7 in price, yet easily has overall QB1 upside on Sunday.

The last five full games Prescott has played have been historically great. If we remove the game Prescott was injured against the Giants, he is averaging over 35 fantasy points per game. 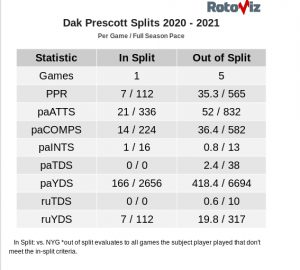 That projects to 564.8 fantasy points and 6,694.4 passing yards in a 16-game season. With a healthy Amari Cooper, CeeDee Lamb, solid tight ends in Dalton Schultz and Blake Jarwin, along with quality receiving backs in Ezekiel Elliott and Tony Pollard, Dak is likely priced at his Week 2 floor performance.

With the fourth-highest Floor Projection on DraftKings, Prescott is a great pivot off the top-priced quarterbacks such as Patrick Mahomes, Kyler Murray, and Lamar Jackson.

A 55-point over/under with a point spread that opened at just 1.5 is the ideal game to target a starting DFS quarterback.

If you don’t like Dak Prescott, why not pick the opposing quarterback from the same game?

Justin Herbert may see a dip in ownership after a disappointing QB26 performance against Washington. He faces a Dallas defense that just allowed the overall QB5 performance to Tom Brady, including 379 yards and four touchdowns.

Herbert is priced right below Prescott on both sites. Sometimes, fantasy football doesn’t have to be hard—target one of the quarterbacks in this potential shootout.

Winston produced the overall QB4 stat line in a fantastic 38-3 dismantling of Green Bay. But don’t expect a repeat this Sunday in Carolina.

New Orleans head coach Sean Payton is being very careful with Winston, understanding his penchant for turnovers. Against the Packers, Winston only attempted 20 passes and threw for just 148 passing yards. Those five touchdowns represent remarkable efficiency that begs to be faded.

The Saints now face a Panthers defense that just posted six sacks and 10 quarterback hits against the Jets’ improved offensive line. With New Orleans facing a second consecutive road game against a division rival, there are better options than Winston, who could easily have more turnovers than touchdowns.

I’m not afraid of going back to the well with Ronald Jones.

The is a pick made out of necessity; the Buccaneers necessity to find an early-down rusher. Head coach Bruce Arians likes Leonard Fournette but recognizes his injury history. Tampa Bay is a 12-point favorite against an awful Falcons defense.

I expect the Buccaneers to get control early and feature a run-dominated game script in the second half. Ronald Jones will be the back used in that scenario, not Fournette. After a horrific 14 rushing yards and a fumble against Dallas, it’s notable that head coach Bruce Arians purposely mentioned Jones’s role in his mid-week press conference.

The Buccaneers need to establish the rushing attack to balance an offense led by the great but 44-year-old Tom Brady. Jones is a more talented and better option for that role over Fournette, Giovani Bernard, or Key’Shawn Vaughn. Jones is only the 41st running back by price on DraftKings, yet is the 15th-highest at the position by our Bales Model.

It is always risky with RoJo, but the price has never been better for a 24-year-old running back with two overall top-five running back finishes last year.

One thing is clear after Week 1; Nyheim Hines is going to be an issue in DFS.

Right after it was announced that Hines inked a three-year, $18 million contract extension, he tallied six receptions on a team-high eight targets. Hines’ 34 snaps were just eight less than starting running back Jonathan Taylor, for a fraction of the cost in DFS.

This week, Indianapolis faces another tough matchup against a Rams team that just posted 34 points against a tough Chicago defense. I expect Hines to be heavily used again in a game with a solid over/under of 47.5 points, making him a great cheap option, especially with DraftKings PPR format.

We have Hines’ DFS rating slightly behind Taylor at $2500 less. Hines also brings a 7.1 floor, which is a closer projection to higher-priced running backs such as Ronald Jones, Damien Harris, and Mike Davis.

The Rams struggled to contain Chicago running backs David Montgomery and Damien Williams. Their secondary is strong at limiting wide receiver production. Regardless of the game script, Hines’ versatility makes him one of my favorite value plays in Week 2.

Jacobs entered Monday Night Football with a questionable tag due to illness. He found fantasy relevance as a result of two touchdowns, but his yardage production was minimal (34 rushing yards, six receiving yards). That was a direct result of a stout Ravens run defense, but things get even tougher against Pittsburgh in Week 2.

Pittsburgh ranked fifth overall in rushing DVOA per FootballOutsiders last season and will present a strong challenge to Jacobs in their home opener. A bigger concern is Jacobs’ lack of involvement in the passing game, with Kenyan Drake catching all five of his targets for 59 receiving yards.

In a game with just a 46.5 over/under and the Steelers favored by 5.5 points, I expect the Raiders to lean on their passing game to keep pace. Per the RotoViz Team Splits App, the Steelers outscored their opponents at home by over 10 points per game in 2020. 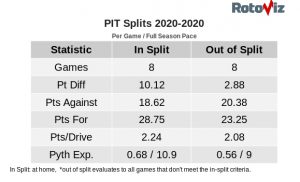 Jacobs’ price tag on both FanDuel and DraftKings is a hard pass, given his limited receiving use and a tough rushing matchup against the Steelers.

One of the more underreported stat lines from Week 1 was from Brandin Cooks in the Texans 37-21 win over Jacksonville. The 27-year-old speedster racked up 132 receiving yards on five receptions and led Houston with seven targets. Cooks gave the overall WR22 performance in 0.5 PPR formats, even without a touchdown.

The Texans now travel to Cleveland as 12.5 point underdogs, which should lead to an abundance of negative game script. Tyreek Hill just torched the Browns for 11 receptions, 197 receiving yards, and this 75-yard touchdown catch.

(Mahomes is a cheat code)pic.twitter.com/LGyfqyFdMB

Houston quarterback Tyrod Taylor has always enabled his WR1 to have top fantasy production, dating back to his days in Buffalo with Sammy Watkins. At just $5900 on DraftKings and $6600 on FanDuel, Cooks has a perfect setup to outperform this low price tag. His rating on FantasyLabs for FanDuel is higher than much more expensive receivers such as Adam Thielen, Amari Cooper, and Chris Godwin.

Let the pricing disrespect continue for veteran wideout Tim Patrick. He is not a flashy name, but Patrick again produced four receptions, 39 receiving yards, and a touchdown in Denver’s 27-13 win on the road against the Giants. This occurred even with leading wideout Jerry Jeudy tallying six receptions and 72 receiving yards before exiting the game with a high-ankle sprain.

With Jeudy now out, Patrick gets to face a Jacksonville defense that just allowed 37 points to Tyrod Taylor and the Texans. Patrick produced four WR2 or better weeks last season when Courtland Sutton was injured and is set up for another big performance on Sunday.

Sutton is slowly returning from ACL surgery, and fellow wideout KJ Hamler clears the field with his deep-play ability. With Vic Fangio’s defense ready to confuse Jacksonville rookie quarterback Trevor Lawrence, I wouldn’t be surprised to see Patrick find the end zone more than once. Patrick is currently the WR54 in price on FanDuel, even below teammate KJ Hamler.

If you need salary relief for your third DFS wide receiver, Patrick is a great choice.

Godwin had a great Week 1, tallying nine receptions, 105 receiving yards, and one touchdown en route to the overall WR13 performance. In a home game against the Falcons, with Tampa Bay as a 12-point favorite, I’m fading Godwin at his increased price on both sites.

Godwin is priced as the WR14 on DraftKings but is still competing for targets with Antonio Brown, Mike Evans, and tight end Rob Gronkowski. Look for coach Bruce Arians and Tom Brady to get Evans involved early, coming off a three-reception, 24 receiving yard disappointing outing against Dallas.

I also expect the Buccaneers to try and establish a better rushing attack for more balance. Arians has already publicly supported running back Ronald Jones, who could see a ton of opportunities in the second half of a potential Tampa Bay blowout.

This week, Godwin brings a safe floor, but I prefer the ceiling of lower-priced players such as Cooper Kupp, Allen Robinson, and Julio Jones to Godwin in a projected comfortable win by the Buccaneers.

Betting on a big bounceback for Andrews, who underperformed in a favorable matchup on Monday Night Football against the Raiders. It must have been particularly tough for Andrews to watch opposing tight end Darren Waller see 19 targets in the Raiders’ upset win over Baltimore.

In a critical Week 2 matchup with Kansas City, the Ravens will need to get Andrews going to match the Chiefs offense. This game carries a 55-point total, matching the Chargers-Cowboys for the highest total of Week 2. Andrews has the third-highest rating on FanDuel total per our Bales model on FantasyLabs but is only the fifth-highest priced tight end. Kansas City allowed the seventh-most fantasy points to opposing tight ends last season and just allowed Cleveland tight end David Njoku to tally 76 receiving yards in Week 1.

There are very few tight ends that could find the overall TE1 performance, but Andrews is at the top of that list. Andrews had a poor performance at Kansas City last season, seeing eight targets but only converting that to just three receptions and 22 yards. If the Ravens want to avoid an 0-2 start, Andrews will need to see heavy volume on Sunday. At a sub-$6000 price, I’ll gladly take that upside.

The only thing standing in the way of elite tight end fantasy production was teammate Zach Ertz. With Ertz potentially sidelines with a hamstring injury suffered against the Falcons, Goedert is in the perfect DFS situation on Sunday against San Francisco.

The 49ers earned a 41-33 win at Detroit, in a game they led comfortably until a massive fourth-quarter rally by the Lions. Detroit tight end T.J. Hockenson torched the 49ers for eight receptions, 97 receiving yards, and a touchdown, good for the overall TE3 performance.

San Francisco now travels cross-country for a 1:00 p.m. east coast battle at Philadelphia. Even with Ertz playing against Atlanta, Goedert still posted the overall TE6 stat line, garnering four receptions, 42 receiving yards, and a touchdown. At his $4900 price on DraftKings, Goedert is a great pivot off the top tight ends (Travis Kelce, George Kittle, Darren Waller) and has a top-three tight end performance easily in his range of outcomes.

Even with San Francisco’s talented defense, this game carries a 50-point total and a minimal 3.5-point spread. The Eagles will need to score points, and Goedert’s connection with quarterback Jalen Hurts is off to a great start in 2021.