In this piece, I highlight wide receivers who stand out in our large suite of analytical fantasy tools, most specifically our FantasyLabs Models. While the Models are built for daily contests, this is an all-purpose fantasy article with actionable information for all formats.

Here’s where they place within our Week 16 fantasy football rankings (as of Thursday morning).

Of these seven, the two who stand out most to me are Robinson and Johnson. The other guys I will highlight as needed in the section on players with week-winning upside.

Odds as of Thursday morning and via DraftKings Sportsbook, where you can get up to a $1,000 sign-up bonus today.

Week after week, Robinson pops in our Models. I guess that’s what happens when a guy has elite target volume and a string of great matchups.

And this isn’t just any matchup: It’s the first #RevengeGame of Robinson’s career, and it comes against a Jaguars team that ranks No. 32 with a 29.2% pass-defense DVOA (per Football Outsiders).

On top of that, the Jags have significant injuries in the secondary and might be without starting cornerbacks C.J. Henderson (groin, IR), Sidney Jones (Achilles) and D.J. Hayden (hamstring, IR). In their absence, Robinson will likely match up most with cornerback Greg Mabin, an undrafted journeyman third-stringer allowing 10.5 yards per target this year.

It would be great if Robinson had someone better than quarterback Mitchell Trubisky throwing him the ball. It really would. But Robinson has had to deal with shoddy passers his entire career.

In case you ever feel sorry for yourself, here’s a list of Allen Robinson’s No. 1 QBs since his sophomore breakout at Penn State.

And Trubisky might not actually be all that bad in Week 16 because he’s a proven statistical bully. Under head coach Matt Nagy, Trubisky has produced against bottom-10 pass defenses (per RotoViz Game Splits App). 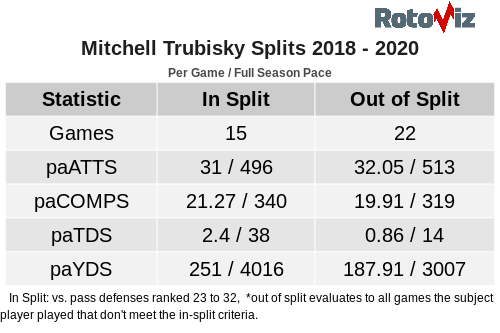 And as a favorite of at least three points against a bottom-10 pass defense, Trubisky has bumped up his averages to 278.4 yards and 2.6 touchdowns passing.

In this situation, Trubisky has the capacity to put up stats, and if he does, Robinson should be the primary beneficiary.

And as great as the matchup is, what probably matters most is the volume Robinson will get: In his 20 full games with quarterback Mitchell Trubisky since last year, Robinson has averaged 9.7 targets, which he has turned into 15.5 PPR and 9.6 STD points per game.

Thanks to his elite usage, Robinson is on pace to exceed his marks from last season.

Robinson is No. 8 at the position with 15.6 expected fantasy points per game (per RotoViz NFL Player Statistical Summary)

Robinson is a solid WR1 in season-long leagues and the No. 1 receiver in the Koerner, SportsGeek and Hodge Models for FanDuel.

With Johnson there are two large negatives. First, he has a tough matchup against the Colts, who are No. 5 with a 73.8 coverage grade (per Pro Football Focus). Second, he might not be good at football.

And I really do mean that.

For the season, he has an abysmal 6.0 yards per target.

Diontae Johnson is now 125th in the NFL in yards per target behind David Montgomery, Tyler Eifert, and Braxton Berrios.

Among all wide receivers, Johnson is Nos. 5 & 7 with 9.7 targets and 15.7 expected fantasy points per game — and that’s despite missing significant chunks of multiple games with injuries.

Whenever Diontae Johnson is asked to catch a ball: pic.twitter.com/1zn7lkJ247

… then we have a representative 10-game sample in which Johnson has averaged 18.4 PPR and 10.9 STD points on 12 targets per game.

That kind of volume can go a long way toward compensating for any deficiencies.

And there are some macro reasons to be enthusiastic about the Steelers in general. Despite their three-game losing streak, I think they’re actually in a good spot. They’re at home, the Colts are playing their third road game in four weeks and HC Mike Tomlin is the type of “motivator of men” who should almost never be an underdog.

In his almost 14 years with the Steelers, Tomlin as an underdog is 36-19-2 against the spread (ATS), good for an A-graded 28.1% return on investment (ROI, per our Bet Labs database).

And as a home dog, he is 10-3-2 ATS (44.4% ROI). You can bet on this game at FanDuel, and this is the exact spot in which sports speculators should back the Steelers.

Johnson is an upside WR2 in season-long leagues and the No. 1 wide receiver in the Raybon Model for FanDuel, where he has a position-high +3.16 Projected Plus/Minus.

In this section, I highlight some wide receivers who I think will outperform expectations and whom I especially like as upside season-long and DFS tournament plays.

Tyreek Hill, Chiefs (-10.5) vs. Falcons (54 O/U): The Chiefs have a slate-high 32.25-point implied Vegas total, and Hill has averaged 92.9 scrimmage yards and 0.93 all-purpose touchdowns in his 42 full games with quarterback Patrick Mahomes. For the second week in a row, Hill leads all receivers in our Models with his median, ceiling and floor projections.

Calvin Ridley, Falcons (+10.5) at Chiefs (54 O/U): No. 1 wide receiver Julio Jones (hamstring) is uncertain to play, and Ridley has gone off for an average of 112.3 yards on 11.3 targets across his six career games without Jones. Ridley is No. 1 in the league with 156.9 air yards and yards after catch (AirYAC) per game.

D.K. Metcalf, Seahawks (-1) vs. Rams (47.5 O/U): The Rams are No. 3 with an 82.5 PFF coverage grade, and shutdown cornerback Jalen Ramsey & Co. held Metcalf to just 2-28-0 receiving on four targets in Week 10, but Metcalf is one of just three wide receivers this season (along with Tyreek Hill and Davante Adams) with a 1,000-10 stat line. The only thing scarier than starting him against Ramsey is not starting him at all.

Keenan Allen, Chargers (-3) vs. Broncos (49 O/U): I’m not putting too much stock in his Week 15 performance because Allen (hamstring) was severely limited and had just a 36% snap rate, but in his 11 healthy games with quarterback Justin Herbert, Allen has had elite volume, even with the return of target-dominant running back Austin Ekeler in Week 12.

You can bet on this game at DraftKings, and this is a great spot to fade the Chargers, but Allen still has fantasy upside against a Broncos defense that is perilously thin at cornerback: Starters A.J. Bouye (suspension), Bryce Callahan (foot, IR) and Essang Bassey (knee, IR) are all out, as is backup Duke Dawson Jr. (knee, IR).

Terry McLaurin, Football Team (-1.5) vs. Panthers (44.5 O/U): It’s unclear as to whether the Team will go with injury-defying Alex Smith (calf) or club-loving Dwayne Haskins (irresponsibility) at quarterback, but either way, McLaurin will be an option — because he’s always an option. After underwhelming back-to-back performances in Weeks 13-14, McLaurin bounced back last week with 7-77-0 receiving on 12 targets, and for the year he’s No. 5 with a 0.66 WOPR.

Brandin Cooks, Texans (-8.5) vs. Bengals (49 O/U): This is an obligatory reminder that Cooks is now the No. 1 receiver for the Texans in the absence of Will Fuller (suspension), Randall Cobb (toe, IR) and Kenny Stills (release). In his nine games since the firing of HC Bill O’Brien, Cooks is 53-705-3 receiving on a team-high 72 targets. The Bengals are No. 27 with a 17.8% pass-defense DVOA.

In his 19 games with Darnold over the past two seasons, Crowder has been the best version of himself. 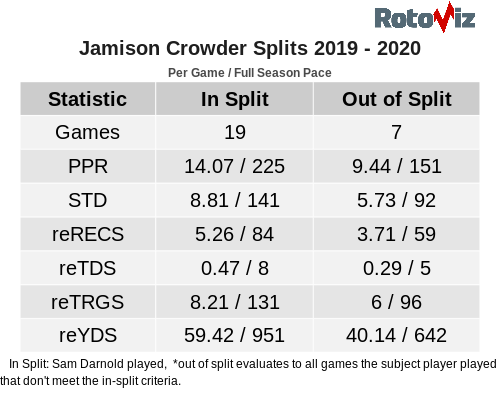 Brown slot cornerback Kevin Johnson (groin/knee) is likely to play, but he’s dealing with an injury.

Patrick is slated for a tough matchup with shutdown cornerback Casey Hayward Jr., but he has underappreciated upside with either 100 yards or a touchdown in 7-of-13 games.

Breshad Perriman, Jets (+9.5) vs. Browns (47 O/U): Even though rookie Denzel Mims has led the Jets with 41 targets since making his NFL debut in Week 7, Perriman has been the true No. 1 receiver with a team-best 18-330-3 receiving in that timeframe. Sure, Perriman is likely to see shadow coverage from No. 1 cornerback Denzel Ward, and I already blurbed Jamison Crowder, but why highlight just one receiver in the league’s worst pass offense?

Laviska Shenault Jr., Jaguars (+7) vs. Bears (47 O/U): The Jags could be without No. 1 running back James Robinson and rotational receiver Collin Johnson, so Shenault could get extra carries that otherwise would have gone to Robinson, and he could also see extra targets in an offense that leans more on the pass in the absence of its lead back. Since returning from injury in Week 12, Shenault has a team-high 24 targets, plus six rushing attempts.

Jerry Jeudy, Broncos (+3) at Chargers (49 O/U): Sharp tape grinders insist that Jeudy is already one of the league’s best route runners and simply needs more (and/or better) targets. Even with teammate Tim Patrick’s return in Week 9, Jeudy still leads the team with 6.3 targets and 96.4 AirYAC per game since then. He has a position-high +4.48 Projected Plus/Minus on DraftKings.

Keelan Cole, Jaguars (+7) vs. Bears (47 O/U): People tend not to expect much from Cole, but he has been no worse than a fantasy WR2 in 35% of games this year (per RotoViz NFL Stat Explorer). 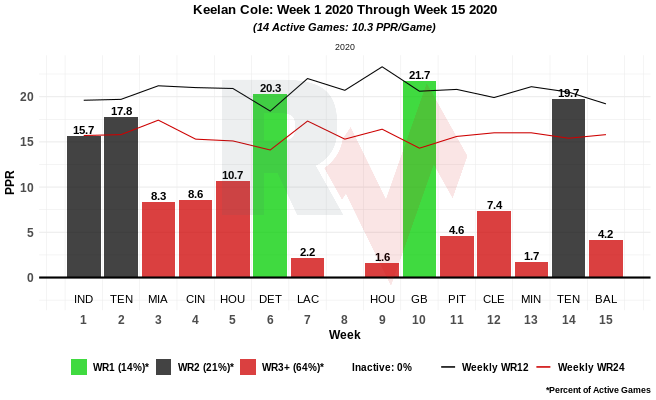 For a third straight game, the Bears might be without starting slot corner Buster Skrine (concussion), who is yet to return to practice. Backup slot corner Duke Shelley has just 84 coverage snaps of NFL experience and has allowed 9.3 yards per target with an 85.7% catch rate.

Mecole Hardman, Chiefs (-10.5) vs. Falcons (54 O/U): With his career mark of 11.0 yards per target, Hardman can turn any touch into a touchdown, and last week he had a season-high nine targets. Opposing receiver units are No. 2 in the league against the Falcons with 28.4 fantasy points per game on 212-2,871-15 receiving.

Anthony Miller, Bears (-7) at Jaguars (47 O/U): The Jags are No. 30 with a 36.0 PFF coverage grade. If I had anything positive to say about Miller, this is where I would put it. The Jags will likely be without starting cornerbacks C.J. Henderson (groin, IR), Sidney Jones (Achilles) and D.J. Hayden (hamstring, IR). Miller is a professional wide receiver in the NFL. The Jags are bad. I get paid actual money for this analysis.