Here’s where they place within our Week 16 fantasy football rankings (as of Tuesday evening).

Of these four, the two who stand out most to me are Mahomes and Herbert. The other guys I will highlight as needed in the section on players with week-winning upside.

Mahomes has two large factors in his favor for Week 16.

If just that were the blurb, it would be enough.

The Falcons have been marginally better on defense since the Week 6 dismissal of head coach Dan Quinn, but they haven’t been significantly better. This week they might be without two secondary starters in cornerback Darqueze Dennard (quad) and safety Ricardo Allen (concussion), both of whom missed practice all of last week before sitting out their Week 16 game.

Mahomes has a great matchup, and it’s not as if he even needs it — because he’s Patrick Mahomes.

… and now he’s a massive -400 MVP frontrunner at DraftKings.

He has simply dominated this season. Even when he hasn’t been great, he has still been elite. Think of his road game against the Dolphins in Week 14: He threw three interceptions and took three sacks for 39 yards — and he still passed for 393 yards and two touchdowns in a 33-27 win.

His 2020 performance is hardly surprising: Since becoming a full-time starter in 2018, Mahomes has never been worse than a fantasy QB2, and in 75% of his games he has been a fantasy QB1 (per RotoViz NFL Stat Explorer). 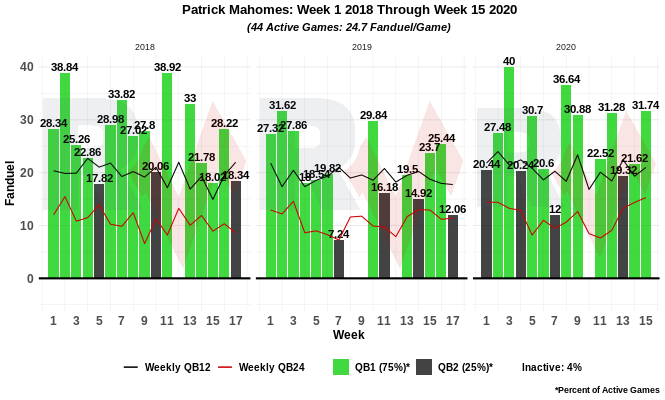 It’s a slight negative that Mahomes is on the adverse side of his home/road splits (per our FantasyLabs Trends Tool).

But I doubt that will matter in Week 16: The Chiefs have a slate-high 32.25-point implied Vegas total: They should put up points.

From a sports betting perspective, Mahomes is 30-18-2 against the spread (ATS, including postseason), good for a 22.9% return on investment (ROI, per our Bet Labs database).

Investing in Mahomes tends to be profitable.

For the second week in a row, Mahomes leads all quarterbacks in our Models with his median and floor projections.

Mahomes is a no-doubt top-three QB1 in season-long leagues and the No. 1 quarterback in the Koerner, Raybon, SportsGeek and Freedman Models for FanDuel.

Herbert is a -950 favorite at FanDuel to Win Offensive Rookie of the Year. With those odds, Herbert has a 90.5% implied probability to win the award … so his rookie campaign is going well.

In fact, he’s having a season for the ages. In his 13 starts, he has at least 300 yards or three total touchdowns in all but two games. That’s the type of consistent production you’d expect from someone like Mahomes.

On paper, Herbert’s matchup doesn’t look great: The Broncos are Nos. 8 & 9 with a 71.4 coverage grade and 0.8% pass-defense DVOA (per Pro Football Focus and Football Outsiders), but those rankings almost certainly no longer apply, as the Broncos are perilously thin at cornerback.

Three of Herbert’s top pass-catching options in wide receivers Keenan Allen (hamstring) and Mike Williams (back) and running back Austin Ekeler (quadricep) were severely limited last week, but the Chargers played on Thursday so they now have 10 days to recover. With the extra rest, Herbert seems likely to have all his skill-position support in place for Week 16.

Full disclosure: I’m betting against the Chargers. I can’t help myself. The Chargers are home favorites — and that should theoretically be good — but head coach Anthony Lynn has a Jason Garrett-esque ability to make the worst out of an ideal situation.

You can bet on this game at William Hill, and this is the exact spot in which sports speculators should be fading Lynn and the Chargers.

But the betting angle is irrelevant to Herbert, who has been a splits-independent player in his first NFL season: His fantasy production as a home favorite is in line with his production in all other situations (per RotoViz Game Splits App). 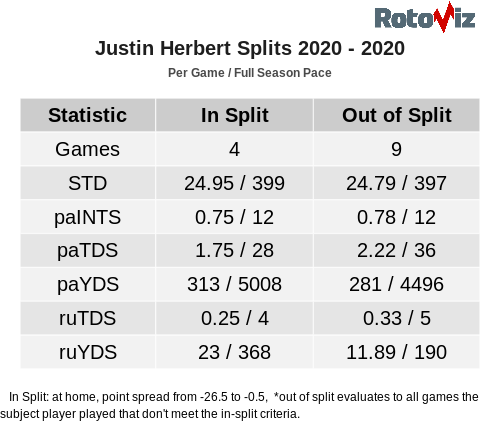 Even if the Chargers underperform this week as home favorites, Herbert is likely to get his fantasy points.

Herbert is a low-end QB1 in season-long leagues and the No. 1 quarterback in the CSURAM88 and Hodge Model for FanDuel.

Deshaun Watson, Texans (-8.5) vs. Bengals (45.5 O/U): Even without wide receivers Will Fuller (suspension), Randall Cobb (toe, IR) and Kenny Stills (released), Watson has averaged 8.7 adjusted yards per attempt (AY/A) over the past three weeks. In the 10 games since head coach Bill O’Brien’s termination, Watson has averaged 304.2 yards passing and 2.1 touchdowns passing. The Bengals are No. 27 with a 17.8% pass-defense DVOA.

Jalen Hurts is the first player in NFL history with 500 Pass yards and 150 Rush yards in his first two career starts. — Elias

Of all the quarterbacks in the 2020 draft class, Hurts might have the highest fantasy upside: As a transfer senior, he was 3,851-32-8 passing and 233-1,298-20 rushing last year at Oklahoma, finishing No. 2 in Heisman voting. He has position-high +4.50 and +5.63 Projected Plus/Minus values on DraftKings and FanDuel and leads all quarterbacks in our Models with his ceiling projections.

Matt Ryan, Falcons (+11) at Chiefs (55 O/U): No. 1 wide receiver Julio Jones (hamstring) is uncertain to play. Ryan tends to underwhelm outside of a domed environment and the Chiefs are No. 10 with a 68.0 PFF coverage grade, but he was 356-3-0 passing last week without Jones against a top-eight Buccaneers pass defense and he has position-high marks with seven Pro Trends and a 79% Bargain Rating on DraftKings, where he’s the consensus top quarterback in our Models. Since 2018, Ryan trails only Patrick Mahomes in 300-yard passing games with 23.

Mitchell Trubisky, Bears (-7.5) at Jaguars (47 O/U): A statistical bully of the highest order, Trubisky has dominated bottom-10 pass defenses under the guidance of HC Matt Nagy. 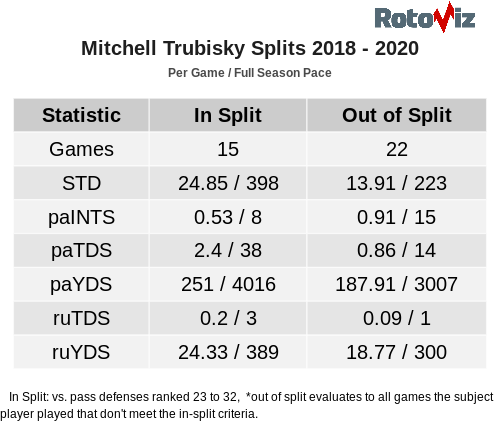 The Jaguars are No. 31 with a 19.2% pass-defense DVOA and might be without starting cornerbacks C.J. Henderson (groin, IR), Sidney Jones (Achilles) and D.J. Hayden (hamstring, IR). Trubisky makes for a great stacking partner with No. 1 wide receiver Allen Robinson, who has an elite matchup against cornerback Greg Mabin, an undrafted journeyman third-stringer allowing 10.5 yards per target this year.