The Week 16 NFL main slate kicks off on Sunday, Dec. 27, at 1 p.m. ET. In this piece, I highlight tight ends who stand out in our large suite of analytical fantasy tools, most specifically our FantasyLabs Models.

While the Models are built for daily contests, this is an all-purpose fantasy article with actionable information for all formats. As news breaks throughout the week and we adjust our projections, where players rate in our Models will change. For updates, visit the Models directly.

There are five tight ends atop the individual Pro Models that Jonathan Bales, Peter Jennings (CSURAM88), Sean Koerner, Chris Raybon, Kevin McClelland (SportsGeek), Ryan Hodge and I have constructed. Here’s where they place within our Week 16 fantasy football rankings (as of Thursday afternoon).

Of these five, the two who stand out most to me are Kelce and Goedert. The other guys I will highlight as needed in the section on players with week-winning upside.

Odds as of Thursday afternoon and via DraftKings Sportsbook, where you can get up to a $1,000 sign-up bonus today.

I’m going to recycle most of my Kelce blurb from last week.

With just two games to play, Kelce is just six yards out of the league lead with an obscene 1,318 yards receiving. No tight end has ever finished the season as the league’s leading receiver, but I bet that Kelce will be the first one to do it. I mean that literally. I bet on it. Two weeks ago. And I tracked it in The Action Network App.

Whenever Kelce is eventually inducted into the Hall of Fame, his 2020 season will be the one people mention first. Even though he’s now 31 years old, Kelce has been as dominant as ever this year.

Unsurprisingly, Kelce is No. 1 among all tight ends with 15.8 expected fantasy points per game (per RotoViz NFL Player Statistical Summary). Since quarterback Patrick Mahomes became the full-time starter in 2018, Kelce has been a fantasy TE1 in 87% of his regular-season games (per RotoViz NFL Stat Explorer). 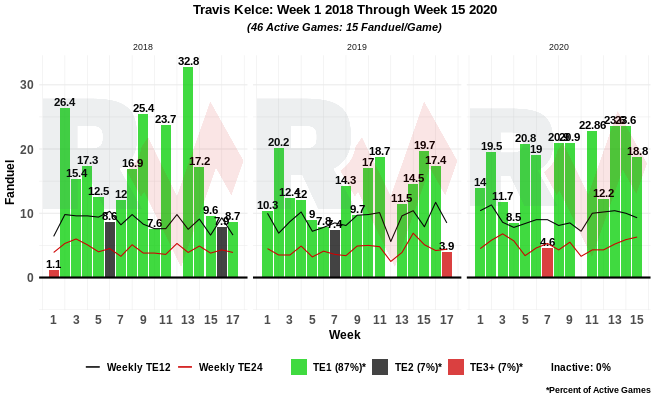 AirYAC is a leading indicator of fantasy output. You can find it in the RotoViz NFL Player Statistical Summary. And Kelce isn’t just the leader in AirYAC at tight end. He’s one of the leaders for the entire league, and it’s hard for a tight end to approach the AirYAC numbers we see from wide receivers.

On top of all that, Kelce has a good matchup against the Falcons, who are No. 27 with an 18.2% pass-defense DVOA against tight ends (per Football Outsiders). Opposing tight end units are No. 6 in the league against the Falcons with 9.6 fantasy points per game on 80-806-9 receiving.

With Kelce, matchups are irrelevant — but a nice matchup sure doesn’t hurt. The Chiefs have a slate-high 32.25-point implied Vegas total: They should put up points. What else needs to be said?

Kelce is a weekly must-start top-two TE1 in season-long leagues and a strong pay-up option for cash games. He leads all tight ends in our Models with his median, ceiling and floor projections. Kelce is also a candidate in guaranteed prize pools. Over the past five-plus years, Kelce has had a 0.76 correlation with his quarterback (per our FantasyLabs Correlations Tool). If Kelce has a big game, Mahomes probably will too.

For tournaments, use our Lineup Builder to stack Kelce with his passer. Kelce is the No. 1 tight end in the Bales, Koerner, SportsGeek, Hodge and Freedman Models for FanDuel, where he has position-high marks with eight Pro Trends and a 99% Bargain Rating.

The investment thesis for Goedert is simple.

The Cowboys are No. 31 with a 26.7% pass-defense DVOA against tight ends. On top of that, safety Xavier Woods (ribs) and linebacker Leighton Vander Esch (ankle) are injured and uncertain to play after exiting Week 15 early. What is already a bad Cowboys pass defense against tight ends could be significantly worse.

As for Goedert himself, he has team-best marks with 29-333-2 receiving on 43 targets and a 21% market share of targets. In each of the past six weeks, he has had an incredibly sturdy floor with a minimum of six targets and four receptions. 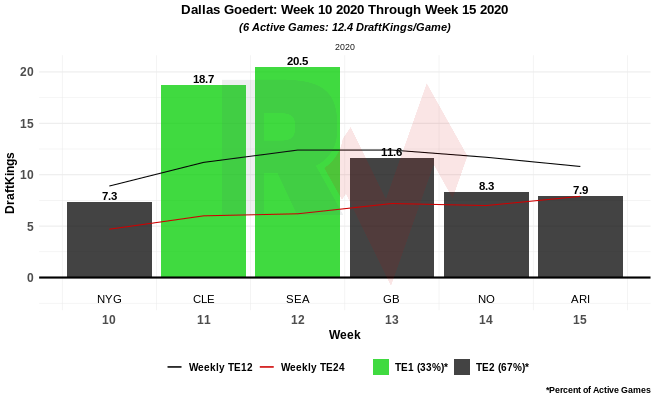 There’s nothing all that sexy about what Goedert has done over the past six weeks, but he has 100% not been the reason you have lost any matchup in that time, during which he is No. 6 with 11.8 expected fantasy points per game

In quarterback Jalen Hurts’ two starts since Week 14, Goedert has maintained his team-high 21% target share. Of all the tight ends outside the elite tier, Goedert might be my favorite this week. Goedert is the top tight end in Josh Hermsmeyer’s Week 16 Air Yards Buy-Low Model.

Goedert is a solid TE1 in season-long leagues and the No. 1 option in the Koerner, Raybon, SportsGeek, Hodge and Freedman Models for DraftKings, where he has a position-high +3.17 Projected Plus/Minus and nine Pro Trends.

Mark Andrews, Ravens (-10.5) vs. Giants (44 O/U): From a sports betting perspective, I’m fading the Ravens. Against quarterback Lamar Jackson, road underdogs are 12-7 against the spread (ATS), good for a 22.3% return on investment (ROI, per our Bet Labs database).

But that doesn’t mean I’m down on Andrews or enthusiastic about the Jaguars. Andrews has looked good over the past two weeks with 10-144-1 receiving on 11 targets since returning from the COVID-19 list, and the Giants are No. 24 with a 16.3% pass-defense DVOA against tight ends.

Logan Thomas, Football Team (-1.5) vs. Panthers (44.5 O/U): It’s unclear as to whether the Team will go with injury-defying Alex Smith (calf) or club-loving Dwayne Haskins (irresponsibility) at quarterback, but either way Thomas will be an option.

With a minimum of four targets in every game and an average of 6.6 targets for the season, Thomas has an elevated floor, and last week we saw his ceiling with a season-high 16 targets, 13 receptions and 101 yards.

He’s No. 6 among all tight ends with a 0.46 WOPR. WOPR (Weighted Opportunity Rating) is a stat created by Josh Hermsmeyer. It combines market shares of targets and air yards and is available at AirYards.com.

But Henry could see more targets than he usually does if wide receiver Keenan Allen (hamstring) is out or limited. With a partial Allen last week, Henry outperformed with 5-65-1 receiving on seven targets. Henry (illness) is dealing with his own issues, but I expect him to be available for the weekend.

Evan Engram, Giants (+10.5) at Ravens (44 O/U): Even with the Week 7 return of No. 1 receiver Sterling Shepard, Engram is No. 3 among all tight ends with a 24% target share and No. 4 with 11.9 expected fantasy points per game over the past eight games. Engram has a position high +2.05 Projected Plus/Minus on FanDuel.

Matthew Freedman is 916-722-34 (55.9%) overall betting on the NFL. You can follow him in our free app. The Editor-in-Chief of FantasyLabs, Freedman is commonly called the Oracle & the Labyrinthian.