This piece will identify some of my favorite DFS stacks of the weekend. Be sure to use our Stacking Tool found within our Player Models to find the highest projected stacks, the stacks that figure to be chalky, and more. Our Correlations page is also a great resource to find hidden edges in stacking positions and games.

This feels like that eventual Mitchell Trubisky explosion game that has occurred at home in each of the past two seasons.

At $5,400 against the Lions, the price is right against a defense that has allowed the eighth-most fantasy points to opposing quarterbacks, including 24 touchdowns.

Detroit will play its first game under new interim head coach Darrell Bevell, and must face an angry Bears team that was called out by head coach Matt Nagy this week. We should get Chicago’s best effort this week, in desperate need of a win after losing five consecutive games.

The stack will Allen Robinson is a natural fit, with the veteran wideout seeing at least nine targets in each of the past three games. Robinson is third among all wide receivers in targets (108) and seventh in red zone targets (12). He has actually seen better fantasy production with Trubisky at quarterback than Nick Foles. 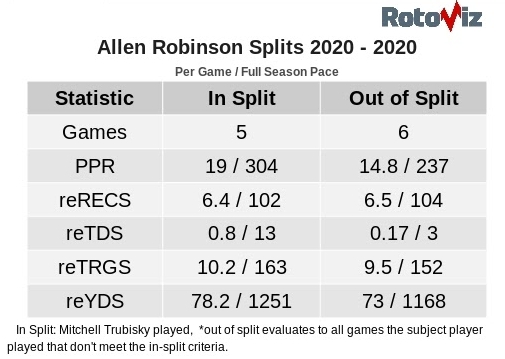 I will also add in running back David Montgomery to this unconventional QB + RB + WR stack. While Montgomery has been massively frustrating at times, he has a fantastic matchup against the uber-generous Lions run defense. Detroit has allowed the following to opposing running backs:

Despite Montgomery’s lack of efficiency, he maintains one of the highest usage rates among all running backs. He ranks eighth in opportunity share, sixth in targets, and eighth in receptions at the position. Montgomery is coming off his best game of the season with the overall RB6 performance last week. He has eclipsed 100 total yards in two of the last three games.

This stack is a low-owned and very cheap grouping, which allows for some expensive plays with high floors. Using the FantasyLabs optimizer, I generated two strong DraftKings lineups, that both included Tennessee running back Derrick Henry and the Seattle defense at home against the Giants. 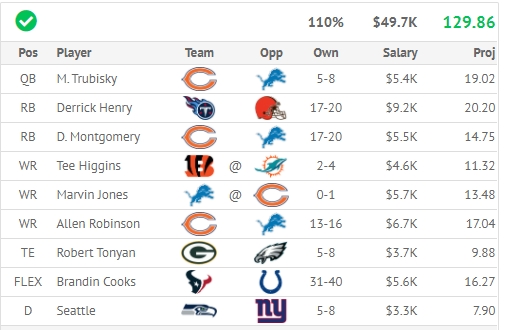 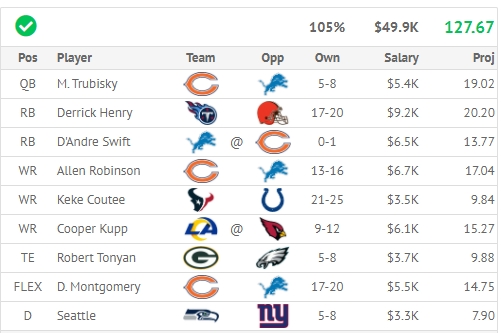 If you want to play Henry and a high-floor/big upside play in D’Andre Swift or Cooper Kupp, the Trubisky stack is a great option.

Despite Derrick Henry’s exorbitant price tag, it’s difficult to find another running with guaranteed volume and multiple touchdowns in his likely range of outcomes. Henry’s yards per carry always increase late in the season, and last week’s 178-yard, three touchdown performance might be just the beginning.

With an expensive running back like Henry, we need to pay down at other positions, ideally at quarterback. Mayfield’s low cost on both DraftKings and FanDuel gives us the exact salary relief we need to compensate for the Henry spend.

Mayfield faces a Tennessee defense that has allowed the fourth-most schedule-adjusted fantasy points to opposing quarterbacks, per 4for4.com. After suffering through two terrible weather games, Mayfield more than exceeded his DFS cost in Week 12 with 258 passing yards, two touchdowns, and 18.4 fantasy points, good for the overall QB11 performance.

Jarvis Landry provides great value on DraftKings as a short area target magnet. He is coming off his best game of the season against Jacksonville, where he turned 11 targets into eight receptions, 143 receiving yards, one touchdown, and the overall WR3 performance.

This week, Landry will draw Tennessee cornerback Desmond King, whose -2.2 coverage ranking is just 62nd among all cornerbacks, per PlayerProfiler.

Not surprisingly, Landry has the second-highest projected plus/minus rating, which is projected points minus salary-expected points, in the FantasyLabs Bales’ Model. His low wide receiver cost provides huge upside even in a low-volume passing attack.

Using the FantasyLabs Optimizer, I prioritized this three-player stack and generated the following DraftKings lineup: 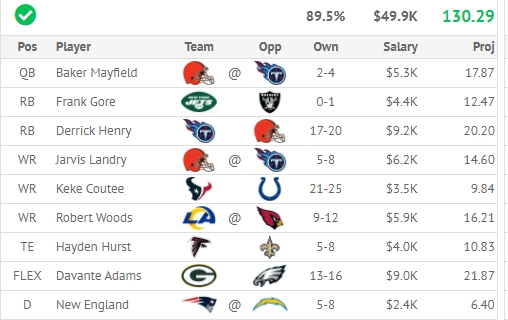 This also gave me exposure to Robert Woods and the big-play upside of Green Bay’s Davante Adams.

Tennessee’s pass defense has been DFS friendly all season, and the price savings on Mayfield makes this stack even more tempting in the game with the highest over/under on the Sunday slate.

Chris Carson is back, and at just the right time.

Seattle head coach Pete Carroll has already hinted at his desire to return to his preferred run-first attack, much to the chagrin of Russell Wilson owners.

However, this is great news for Chris Carson, who has excelled in both the rushing and passing game this season. Carson has seven touchdowns in just seven games, and has seen 3.9 targets per game. In a game with Seattle as a double-digit favorite, the RB + D/ST stack is an ideal choice.

Carson should see plenty of positive game scripts with his Seattle defense facing journeyman Colt McCoy and the Giants. The Seahawks defensive line faces a New York offensive line that has allowed 31 sacks on the season, fifth-most in the league.

The ambiguous recent usage of running backs like Carlos Hyde should limit Carson’s ownership, which we only project at 5-8%. According to the Bales Model, Carson carries the ninth-highest points floor among all running backs, at only the 12th-most expensive price. Coming off an injury in Week 12, Seattle will want to get Carson back to his normal level of production, and home against the Giants provides the perfect opportunity to do it.

I was able to use the optimizer positional rules and player correlations to generate a FanDuel lineup that gives me exposure to some top wide receiver options. 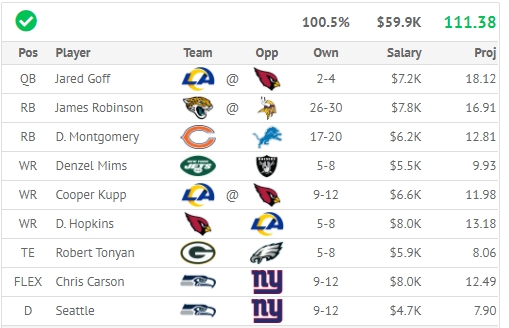 In a game with Seattle as a double-digit favorite, the RB + D/ST stack is an ideal choice.