I started playing DFS on DraftStreet in 2013. For the next six years, I would primarily play cash games because I was in love with the slow, methodical grind, along with the safety that comes from playing a format where you only have to beat one other person or roughly half the field if you’re in 50/50s or double-ups.

Nowadays, I’ve decided to pull the ripcord on the safety net so that I could seek out more upside. The hardest part of switching to GPP only? Getting comfortable with losing… a lot more often. However, with proper game selection and bankroll management, all you need is one or two nice scores to be in the black when the season ends.

And when you’re mostly targeting small-field GPPs, your lineups don’t need to be as perfect compared to when you’re entering these larger fields.

Anyway, each week I’ll be using our large suite of analytical fantasy tools and the FantasyLabs Player Models to discuss my overall strategy for how I’m attacking these smaller fields.

My overall strategy for these formats is quite simple — I try and game stack as much as I can. This strategy can give you unique builds compared to the field, where some players may just be throwing their cash lineups (or a slightly different variation) into them because there aren’t many people competing — or they’re simply not stacking enough in their lineups.

This strategy typically lands you on high-total games because that’s where we’d expect the most points to be scored. Naturally, high-total games come with higher projected ownership on certain players. However, since we are trying to game stack, it’s still possible to have unique builds, and we can still insert other one-off plays to differentiate our lineups.

You don’t need a whole lineup of contrarian plays to win a small-field tournament. I also tend to rely on the Ceiling Projections instead of Median Projections when I am making my lineup decisions.

Also, keep in mind the projected ownership levels in the models are geared toward large-field GPPs, so there is some guesswork on estimating ownership projections for smaller fields. Although, small-field single-entry tournaments typically resemble cash builds, so it doesn’t involve too much guesswork.

Note: I play these small-field tournaments on DraftKings, so that’s what this analysis will focus on.

Games I am Targeting

This is the most obvious game on the slate to target and the one that should be the most popular. If you’re running in the three-entry max streets, I like the idea of stacking the Kyler Murray side and the Ryan Tannehill side on two of your teams. Quarterbacks have a strong correlation of 0.59 with the opposing quarterback, per our Correlation Dashboard.

One of the great features of our Player Models is that you can apply different weights to our NFL projections to create an aggregate set to your specifications: 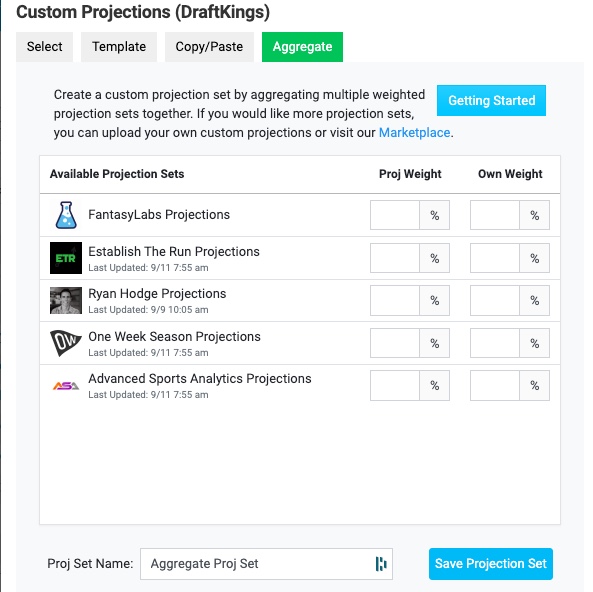 When I make my preferred inputs and look at our Leverage Rating metric, a metric that compares projected ownership with the player’s Ceiling Projection, Kyler and DeAndre Hopkins both have positive Leverage Ratings in our models.

Along with stacking Kyler and Hopkins together, we could still opt to stack Rondale Moore, who now has a projected ownership that is nearly 25% less than Marquez Callaway as of Saturday morning. And Chase Edmonds may not have the highest ceiling, but his cheaper salary will allow for some more roster flexibility, and he has a positive correlation (0.51) with Kyler, per our Player Models. One way to get contrarian with popular games is to target players who may be an afterthought.

I love the Titans’ passing game in this spot with A.J. Brown and Julio Jones, but Derrick Henry could be the key pivot if you’re looking for ways to get contrarian in this game. Henry may go slightly overlooked as most will look to use Brown and Julio as the bring-backs or the primary stack options with Ryan Tannehill.

The way ownership projections look in our models, Christian McCaffrey, Dalvin Cook, and Alvin Kamara will soak up most of that top-tier running back rostership, making Henry a strong pivot in this game. Henry’s floor is lower than those running backs because he doesn’t have the pass-catching chops they do, but he still has multi-touchdown upside.

The best-case scenario for this would be a Cardinals stack with Henry, where the Titans are playing with a lead and Arizona is playing catchup. You could still stack Tannehill with Brown + Julio one of your other entries if you’re playing in a three-max. Henry still has a positive correlation with Tannehill and Brown:

This game is the prototypical one I like to target in these formats. The Chiefs have the highest implied team total on the slate, and the projected ownership doesn’t look to be out of control. I’d also expect the Browns’ side of the ball won’t be heavily targeted.

With all the wide receiver value the popped up, it’s not hard to stack Patrick Mahomes with Tyreek Hill and Travis Kelce. Hill currently has an ownership projection that is under 10%, giving him one of the highest Leverage Ratings in my personal model. My favorite time to roster Hill is when he’s not the chalk. Given how expensive this stack is, a lot of players may only opt to roster one of Kelce or Hill.

It won’t feel comfortable since he’s coming off an injury, but Odell Beckham has the 10th-best Leverage Rating in my model. He was limited in practice all week, suggesting he should be ready to go. If you don’t want to mess with him, Jarvis Landry has the second-highest Leverage Rating, but he costs $600 more than OBJ and has a questionable ceiling. However, his target share is likely the most bankable on the team.

With Landry’s ceiling in doubt, Kareem Hunt may be an overlooked part of this game. As 5.5-point dogs, Hunt may cut into Nick Chubb’s workload if the Browns are consistently playing from behind. Hunt has a positive 0.33 correlation with Baker Mayfield, and Hunt played well last year, averaging a +3.7 Plus/Minus when the Browns were underdogs, per our Trends tool:

If I can afford it in some of my builds, I would like some exposure to Dalvin Cook. Cook led the league with 25.4 touches per game last year, and he averaged 15 routes per game and 3.9 targets per route run.

I don’t think anyone would be surprised if the Steelers got stomped by the Bills on Sunday, but Najee Harris is a strong pivot at $6,300 over the $6,200 Joe Mixon. Harris has a safe workload and should still be effective in the passing game. Overall, Harris’s Ceiling Projection is comparable to Mixon, but Harris is currently projected to be on half as many rosters.

Aaron Jones can be frustrating to roster, but he’s another player who has a modest rostership projection. Last season, his 17.7 touches per game ranked 12th among running backs, and he had a respectable 14.5% target share.

With so many cheap wide receivers in play, paying up for multiple high-priced wide receivers is an intriguing risk/reward move because the cheaper receivers that are in play will naturally make people pay up at running back. Davante Adams will always garner some rostership because he’s Davante Adams. That said, he still has a positive Leverage Rating in my model.

The Vikings have a very condensed target tree, with Justin Jefferson (26%) and Adam Thielen (26%) soaking up over half of the Vikings’ target share. They’re going completely overlooked this week as Jefferson and Thielen are both projected to be on less than 5% of rosters. Consequently, both receivers rank in the top five in Leverage Rating.

With Curtis Samuel going on IR, Terry McLaurin’s already-high target share looks even more appealing. McLaurin saw 27% of the target share and 42% of the air yards for Washington last season. He’s another receiver who is popping in Leverage Rating in my model.

Another pair of wide receivers who are going overlooked are Robby Anderson and DJ Moore. They’re in a great spot against a Jets defense that ranked 28th in pass DVOA last season. Moore was heavily utilized last season with a 24.5% target share, while Anderson checked in at 28%. It’s also noteworthy that Samuel is gone, who saw 19% of the targets last season.

Elijah Moore won’t offer much leverage since I expect to still see him on a fair amount of rosters, but he and Rondale Moore are projected for 15%-25% less rostership than Callaway. Moore steps into an every-down role with Jamison Crowder out and Keelan Cole questionable.

A Moore or Anderson mini correlation with Moore makes a lot of sense for lineups.

Even though Kyle Pitts is projected to be the highest rostered tight end on the slate, I still think he’s worth targeting in the Falcons’ pass-happy offense. His price tag might be the cheapest it will be all season.

Tyler Conklin’s floor is worrisome, but his cheap salary could be a necessary evil to make some of these stars and scrubs builds possible. With Kyle Rudolph gone and Irv Smith out, Conklin still has paths to success. Rudolph and Smith combined for 23% of the target share among tight ends.

With Trey Sermon inactive for the 49ers, I’m adding Raheem Mostert to my list of one-off plays. He’ll be a solid pivot off Antonio Gibson, who is just $100 more than Mostert. Gibson and Mostert are close in the aggregate Ceiling Projections that I run in our Player Models, but some DFS players may not react to this late news, giving Mostert an edge with his current Leverage Rating.

Overall, it’s a strong spot for Mostert as the 49ers are large favorites with a 28-point implied team total.

If you’re struggling to get a feel for the slate, we also have some optimizer templates in our Lineup Builder that you can use to see where the raw projections are leaning for stacks: 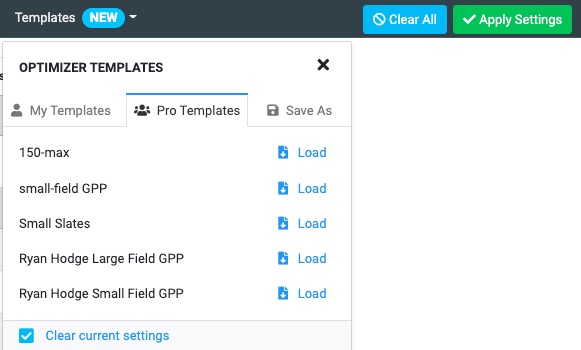