Raybon’s Titans vs. Ravens DFS Breakdown & Strategy for Divisional Round

This is a breakdown of one-game DFS contests for the AFC Divisional Round matchup featuring the Tennessee Titans at Baltimore Ravens on Saturday, Jan. 11 at 8:15 p.m. E.T. on CBS. Be sure to check our Models up until kickoff for up-to-date projections that reflect the latest breaking news.

Lamar Jackson has hung at least 30 DraftKings points on eight of the 15 opponents he’s faced this season while failing to score fewer than 21 only once. Going up against a Titans defense that allowed opposing QBs to surpass their salary-based expectations at 71% clip this season, Jackson lands a full nine points ahead of every other player in terms of median projected points in our DraftKings Showdown Models and is worth the 1.5x hike for the Captain spot.

With Jackson locked in 1.5x slot, you can also fit Derrick Henry plus either Ryan Tannehill or Mark Ingram (calf, questionable), who are projected similarly. I usually trust the QB more in a situation like this, but in addition to not trusting Tannehill very much after he posted only 72 yards on a minuscule 15 attempts last week, I also think that spending so much on Jackson makes Ingram more valuable as in insurance policy in this instance. Sticking with that theme, I’d finish it off with Gus Edwards, Justice Hill and Nick Boyle, essentially locking in all of the passing and rushing production for a Ravens team that is implied by the odds to outscore the Titans by 10 (view live odds here).

FanDuel’s scoring format gives Tannehill the edge over Ingram in terms of median projected points, but our Models also peg Ingram with a floor twice as high, so I would still lean toward rolling with Ingram or splitting exposure here.

With $13,000 left over after locking in Jackson, Henry, and one of Ingram/Tannehill, the optimal combo is Baltimore’s top two wide receivers, Marquise Brown and Willie Snead, who rank third and fifth, respectively, in Projected Plus/Minus (there’s not enough salary to go Edwards-Hill here).

RB Mark Ingram, Ravens: He clocks in third in projected ceiling after Jackson and Henry, And as I alluded to earlier, he also provides the most leverage on Jackson after piling up five multi-touchdown games during the regular season.

Ravens DST: The Ravens blitz at a league-high 54.9% clip, according to Pro Football Reference, and are set up to thrive as 10-point favorites that boasts the top-rated pass defense in schedule-adjusted efficiency, according to Football Outsiders’ weighted passing DVOA (which weights recent games more heavily). If the Ravens can force to drop back at a normal rate, they’ll have monster upside, as Tannehill has taken a sack on a whopping 31.0% of pressured dropbacks this season, according to Pro Football Focus.

Mark Andrews has seen a target share of at last 24% of 10-of-15 games and has upside for even more if his routes run per dropback tick up from his regular-season mark of 61%. He also leads the team in red-zone targets (14) and red-zone touchdowns (7). Marquise Brown could also benefit from an uptick in snaps after running a route on only 72% of dropbacks during the regular season. Neither qualify is true core GPP plays because of how expensive Jackson and Henry are.

If you go Jackson in the Captain spot and Henry in a FLEX, you have almost no flexibility in the last two pots if you also pair Andrews and Brown. As Brown is capable of scoring from farther out, I’d follow the numbers and lean Jackson-Ingram-Brown over Jackson-Ingram-Andrews.

If you fade Jackson the the Captain spot for one of the Titans but are still using him in a FLEX, it becomes key to pair him with Ingram in hopes of production being split between just evenly enough to ensure they’re both worth paying up for without being the highest-scoring player on the slate. If you fade Jackson completely, you have to think about going with potentially going with two of the RBs along with Ravens DST and/or Justin Tucker.

The Ravens allowed NFL-high 69% target rate to wide receivers, which gives A.J. Brown a lot more viability in this spot than he had in last week’s matchup with Stephon Gilmore. Thanks to Brown’s relatively discounted salary, he could potentially pay off not only as a pivot off Henry, or stacked with Tannehill, but also as the lone member of the Titans’ Big 3 in lineups with Jackson in the MVP spot — not to mention, the rookie will likely carry low ownership himself in the 1.5x slot.

I’m expecting the field to look toward Titans pass-catchers for value on DraftKings while overlooking the DST, so there is once again an edge to be had by stacking the Tennessee defense with Henry.

K Justin Tucker, Ravens: He’s put up seven double-digit games with a high of 17, and our Models have him scoring the seventh-most points on the slate. If the Titans defense shows up, there’s a realistic scenario in which he could sink almost every lineup that he isn’t a part of.

Titans DST: This play worked out last week, but the odds aren’t as high of it hitting again this week. Still, the impact on the rest of the slate would be massive enough to warrant be overweight on them. And the fact remains that in Jackson’s only postseason appearance, he was sacked seven times, threw a pick and lost a fumble. I don’t think that version of him still exists, but we’ve seen stranger things.

RB Gus Edwards, Ravens: Carries have been in the three to 17 range with Ingram active with an outside shot at sniping TDs from both Ingram and Jackson. 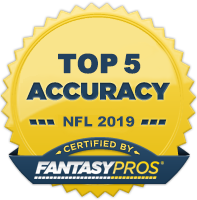 Raybon’s Vikings vs. 49ers DFS Breakdown & Strategy for Divisional Round