Opportunity is Everything for Running Backs 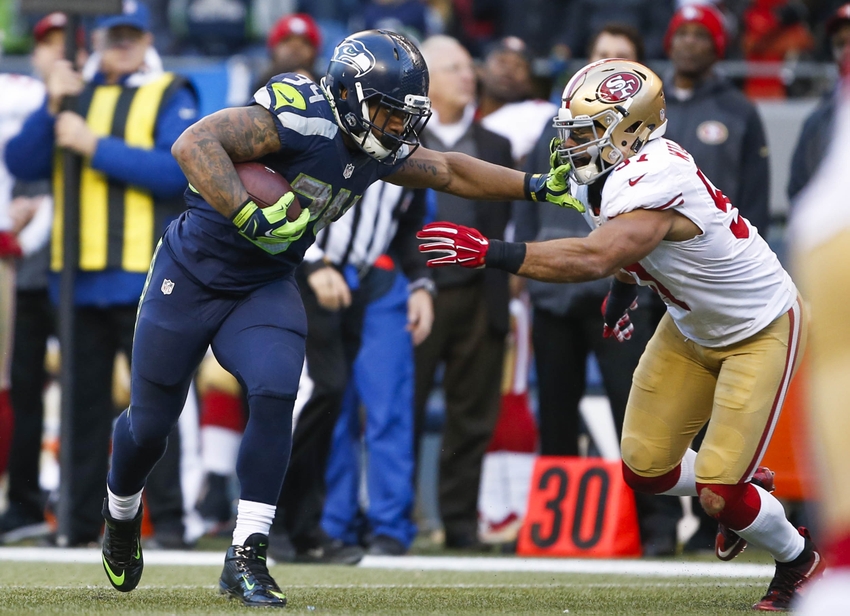 Recently, Bryan Mears published Part 1 of his study on multi-touchdown NFL performances by running backs, wide receivers, and tight ends over the last two seasons. He will be releasing Parts 2-3 soon. Keep an eye out for those pieces. In this post, I want to consider and build upon some of Bryan’s findings.

This is the 67th installment of The Labyrinthian, a series dedicated to exploring random fields of knowledge in order to give you unordinary theoretical, philosophical, strategic, and/or often rambling guidance on daily fantasy sports. Consult the introductory piece to the series for further explanation.

Running Back: It’s All About Opportunity

Mears has shown that, whereas relatively few multi-TD performances come from random, non-stud wide receivers, it’s not uncommon for such performances to be submitted by running backs who fail to accomplish the feat multiple times. Just over 30 percent of all multi-TD games at the running back position belong to players who hit that mark only once in the two-year sample. As a point of comparison, for comparable ‘onesie’ wide receivers, that mark is below 20 percent.

What does this mean?

For wide receivers, a multi-TD game is the mark of talent and dominance. For running backs, it’s a signal of opportunity.

For a wide receiver to have a multi-TD game, he probably needs to be good. He needs to be able to run routes effectively. He needs to be good enough for the quarterback to decide to throw the ball to him and not another receiver. For a running back, he simply needs to get the ball handed to him twice when his team is at the one-yard line and about to score a touchdown.

If you are looking for TD upside at the running back position, you should be looking not necessarily for guys who are good but for those who have opportunity.

Mears has also shown that although running back salaries and projections are correlated when it comes to multi-TD games, they do function independently. Specifically, what he found was that although low-salaried runners tend not to have high projections, when they have been projected to score at least 10 DraftKings points, they have massively outperformed.

Even though in the last two years sub-$4,000 players have made up just over 15 percent of the total sample of runners projected to score at least 10 DK points, such running backs make up about 23 percent of the multi-TD population at the position, good for a differential of over seven percentage points — by far the highest differential in the entire sample. In fact, the only other subgroups with positive differentials were the ones comprised of runners priced no lower than $7,000 — and these guys have relatively slight differentials.

Here’s what Mears has to say about this:

The data could be hinting here that players with good situations and volume potential do well regardless of salary. And if you think about it, you’ll probably find most of those guys in the high range (obviously) and low range (guys filling in for those higher range guys who become injured). The middle range likely consists of either mediocre running backs or ones in less-than-advantageous situations, such as a team that doesn’t run often in the red zone. If you want multi-TD upside, target the extremes with running backs.

Let’s explore just a little bit more what’s happening in these different price tiers, and for the purpose of gaining a wider perspective, let’s look at all running back performances, not just the multi-TD performances.

As Mears has stated, these low-salaried players with elevated projections do well in terms of multi-TD games. Per our free Trends tool, they also do well in general, having a +4.87 Plus/Minus with 70.9 percent Consistency.

And why do they do so well? They are filling in for high-salaried runners — but there’s more than that. They are stepping into an opportunity vacuum. Think Zero RB. Think Thomas Rawls, Tim Hightower, Jeremy Langford, Spencer Ware, and Shaun Draughn. The average injury fill-in is extremely advantaged, for he’s in line to receive not only most of the starter’s touches but also the bulk of the ‘backup’s touches,’ as many teams would prefer not to give the No. 3 (temporary No. 2) runner any more snaps than they must.

In short, the low-salaried high-projection runner has almost no competition for touches. That’s why he does well. He’s probably not all that good of a player. But he’s good enough to get a ton of touches — because there’s basically no one else left at the position to take carries away from him.

Of all the running backs we could examine, the low-salaried high-projection player offers the best combination of value and upside. Of course, he might be somewhat chalky in tournaments, but that’s a separate matter.

When they are projected to score at least 10 DK points, the runners in this middle subgroup tend to underperform, per Mears’ research.

Ironically, this middle-tier subgroup is far worse than the cheap and productive one, with a +2.17 Plus/Minus on 53.7 percent Consistency. Those numbers aren’t horrible — but wouldn’t you rather have better, more reliable production for less money?

If you look at the runners in this subgroup — Frank Gore, Eddie Lacy, Chris Ivory, DeMarco Murray, Theo Riddick, Darren Sproles, and James White are just a few who fell within this salary range at various points last season — you can get a sense of why these runners underperform on a relative basis: They don’t have the outsized opportunities that the cheaper injury fill-ins have. Rather, they are starters who aren’t three-down players or they are pass-catching specialists who receive regular work but never get the majority of the touches.

In general, even the players in this cohort who have reasonable projections are still relatively limited in their opportunities. Historically, the players within this salary range simply do not get the touches they need to reach their upside, whether that’s multi-TD games or just a high Plus/Minus.

In this subgroup, the players projected to score at least 10 DK points tend to score almost double that — they definitely have upside (multi-TD and otherwise) — but they tend not to outperform their salary-based expectations by much, with a collective +0.19 Plus/Minus on 52.1 percent Consistency.

It’s not that these runners are bad. They’re good, and as such they get a lot of opportunity. It’s just that you need to pay up for that opportunity. In this subgroup you’ll find some of the most dominant performers of the last two seasons: Adrian Peterson, Devonta Freeman, Todd Gurley, Le’Veon Bell, Marshawn Lynch, Arian Foster, Matt Forte, Jamaal Charles, Eddie Lacy, Jeremy Hill, and DeMarco Murray.

What do these guys have in common? Not even all of these guys are clearly good. Honestly, it’s debatable as to whether Freeman, Lacy, Hill, and Murray are ‘good.’ What’s not debatable, though, is that when their teams gave them sustained opportunities these guys put up a lot of fantasy points. That’s what they have in common: A record of opportunity.

Some people believe that running back is a talent-driven position. That’s a mistake. Other people sense that success at the position is predicated primarily on opportunity, but they haven’t dug into the data to verify their beliefs. I hope that Mears’ research and my analysis here prove instructive.

– We want to target runners projected to score points.

– Our projections have proven to provide value and to be amazingly accurate as we move up the salary scale.

– If we are seeking value and upside, we should target injury fill-ins below $4,000.

– If we are seeking pure upside, we should target runners priced no lower than $7,000.

– We should probably avoid mid-tier runners, as they provide neither the most value nor the most upside.