Projecting ownership and using that data within guaranteed prize pools (GPPs) is critical for success in daily fantasy football, especially with the average user becoming sharper each week. Some strategies are simple – fade the chalk, for example – but others are less mainstream and still provide an edge in tournaments. Some edges have yet to be found, mostly because there hasn’t been a DFS Contests Dashboard in the industry until this year. As we move into Week 3, let’s dive into that tool and review some ownership trends from Week 2.

Leaving Salary on the Table

The three highest-scoring lineups in the DraftKings Millionaire Maker all used less than the full $50,000 salary cap . . .

In such a top-heavy tournament — 20 percent of the total prize pool went to first place — it’s imperative to have a unique lineup. Rostering a duplicate lineup lowers the expected value of the lineup: Sharing a million dollars is cool, but it’s a lot less cool than winning it outright. So think about it in those terms: When you spend the entire $50,000 cap, you are more probable — sometimes 10 times more so — of rostering a duplicate lineup than you are if you leave a couple hundred dollars on the table. In terms of expected value, leaving salary on the table is suboptimal in terms of maximizing total points, but rostering a duplicate makes the expected value of the lineup much more less optimal, if that makes sense.

This probably deserves its own article, but I’ll briefly touch on this idea now. Barbell investing is the strategy of dividing your portfolio up among extremely low-risk investments and extremely high-risk investments, all the while completely avoiding the middle ground. This approach can be used in DFS with lineups that roster the uber chalk and the uber contrarian.

The idea is that the uber chalk is very safe — there’s reason those players are the uber chalk, and the market has proven to be solid at identifying them. Fading those players can work out if a player busts, but by definition they don’t bust very often. The Barbell DFS approach allows users to roster the chalk and lock in that safety while simultaneously still having a high chance at a unique lineup. The difference between players who are 0.5 and 6.5 percent owned isn’t always huge in terms of potential ceiling, so this perspective exploits that truth. By avoiding the middle ground, we’re avoiding the lowest EV plays — those plays who don’t provide safety (the uber chalk) or an ownership advantage (the uber contrarian). The Barbell DFS perspective targets players offer either one or the other.

This strategy seems to have some merit, at least based on the last couple of weeks. Take a look at the first image posted above: The winner of the Milly Maker, user timwoodbury10, rostered Green Bay running back Ty Montgomery, who was projected to be the chalkiest player of the weekend in our Models and ended up with a slate-high 37.35 percent mark. He ate that chalk and took the safe investment of Montgomery, who had the full three-down work for a Packers squad with a top-five implied point total on the weekend and was only $5,800, but then he also rostered a contrarian player in Jets WR Jermaine Kearse, who went for 22.4 fantasy points at just 1.08 percent ownership. Several of the most duplicated lineups on the weekend included Montgomery, which makes sense given his high ownership level, but this user found a way to roster his safety while also producing a unique lineup:

This issue is less black-and-white than the other ones, but it is still noteworthy. According to the DFS Contests Dashboard, just 13.0 percent of the field rostered a tight end in the flex position:

Tight ends deserve to be flexed much less than the other positions: TEs Delanie Walker, Charles Clay, and Jason Witten led all tight ends with nine opportunities (rushes plus targets) in Week 1. That’s fine, but that ranked 57th among all skill position players on the week. Jaguars RB Leonard Fournette led all players with 29 opportunities. Tight ends, and especially the elite ones like Rob Gronkowski, have high touchdown equity and can certainly have multiple scores in a game, but the odds of that happening are low, and tight ends have low floors because of their low opportunities per game compared to other positions. Thus, while 13.0 percent flex ownership is low, I’m not sure where that number should be.

Finding an Edge in Stacking 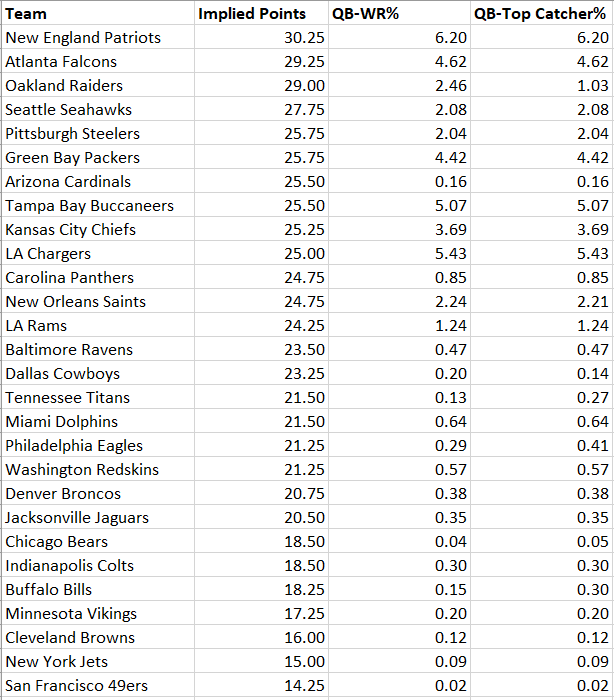 The thing that stands out first is that no stack is too chalky. The highest-owned stack in Week 2 — Tom Brady to receiver Chris Hogan — was found in just 6.20 percent of lineups. That’s a lot compared to other stacks, but in a macro sense it’s not that much. It could be easy to roster Brady and Hogan and also find a unique lineup.

Some stacks in Week 2 were undervalued based on their implied totals. To evaluate these stacks, I ran a simple regression to find out how much ownership we should expect a QB and his top pass-catcher to have given the implied point totals in Week 2. From there, we can subtract the predicted ownership based on that regression from the actual ownership and see which stacks were over- or undervalued. Here’s the graph: There’s a 0.4647 r-squared correlation value between implied point total and stack ownership: 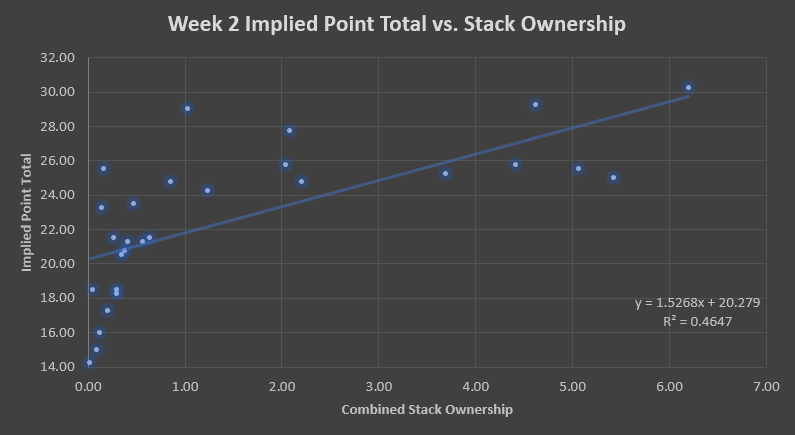 After finding the difference between predicted and actual ownership, here’s the ‘value’ of each team — a high value means their stack ownership was much lower than expected based on their implied point total. 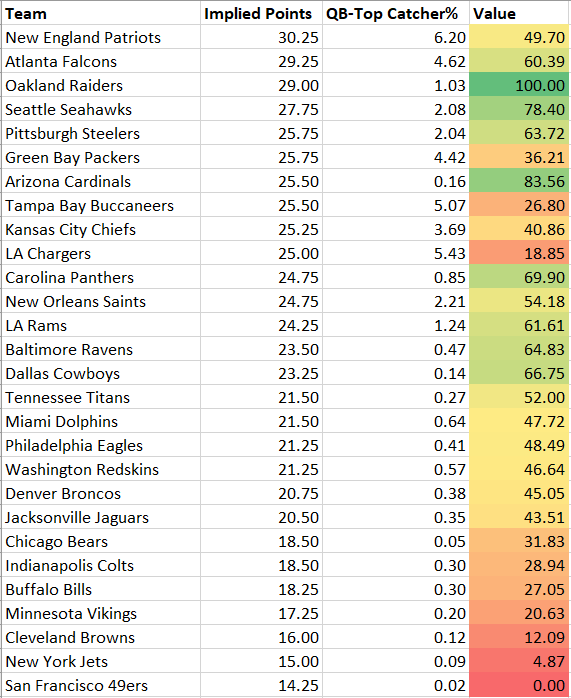 There’s clearly value in moving down even just a couple teams from the highest-implied teams: You don’t have to stack a low-upside team like the San Francisco 49ers to win a GPP, as even the Raiders — implied for a whopping 29.0 points — were low-owned given the Week 2 slate dynamics. In the Milly Maker, QB Derek Carr was owned in 6.35 percent of lineups, Amari Cooper in 6.39 percent of the lineups, and Michael Crabtree (who had three TDs) in 4.71 percent. They were facing perhaps the worst team in the NFL in the New York Jets and somehow Carr and Cooper had a combined ownership of just 1.03 percent.

There are many more edges still to be found in the DFS Contests Dashboard and all of our Tools, so be sure to explore before the Week 3 Milly Maker. I’ll be back next Monday with more thoughts after that contest; good luck!