Week 14 Fantasy QB Breakdown: Deshaun Watson Is Too Cheap to Pass Up

The Week 14 NFL main slate kicks off on Sunday, Dec. 8, at 1 p.m. ET. In this piece, I highlight the quarterbacks who stand out in our large suite of analytical DFS Tools, most specifically our industry-leading FantasyLabs Models.

Odds as of Wednesday and via PointsBet, where Action Network users can access an exclusive promotion to get a 200% deposit match (deposit $50, bet with $150). No strings attached. No rollover required.

Last week, against a 49ers defense that has held quarterbacks to 13.5 DraftKings points per game — the league’s second-lowest mark — Jackson scored 26.3 points.

In 10 of his 12 games, Jackson has scored 25-plus DraftKings points (per RotoViz NFL Stat Explorer). 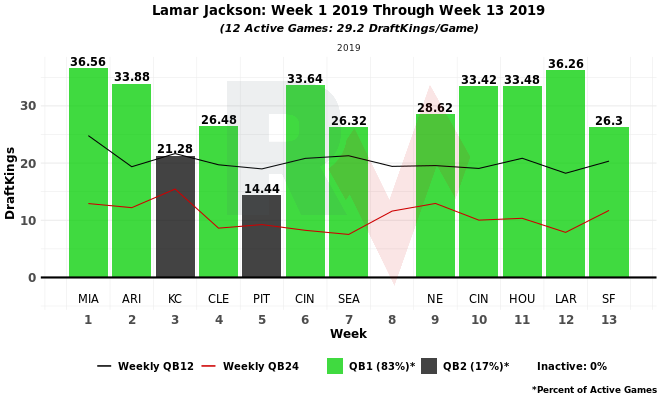 His Konami Code floor is higher than almost any other quarterback’s ceiling.

For the season, he’s easily the No. 1 fantasy quarterback with 29.2 DraftKings points per game. No quarterback has provided more value than Jackson has with his +9.55 Plus/Minus value, and he has hit salary-based expectations in every game but one.

As a favorite, Jackson is on the positive side of his career splits (per our FantasyLabs Trends Tool).

Jackson has a tough matchup. The Bills are No. 3 in coverage grade (per Pro Football Focus), and they have held quarterbacks to the third-fewest DraftKings points per game with 13.7.

No. 1 wide receiver Marquise Brown is likely to be shadowed by emerging shutdown cornerback Tre’Davious White. Since entering the league in 2017, White has allowed a catch rate of just 52.7%.

But Jackson just took it at the 49ers, and they are similar to the Bills, who are exploitable on the ground with a funnel defense that ranks No. 5 against the pass but No. 22 against the run in DVOA (per Football Outsiders).

Just last week, the Bills allowed 27.7 DraftKings points to Dak Prescott, and he’s the quarterback most similar to Jackson in talent and style to face the Bills this year.

Even if Jackson can’t get anything going through the air, I expect him to get his usual production via the running game. The Ravens are No. 1 in the league with a 55.2% rush rate and 55% rush success rate (per Sharp Football Stats).

Because of the matchup, Jackson is probably too risky for cash games, especially with his high pricing, but he’s always an option for guaranteed prize pools.

Jackson is the No. 1 quarterback in our Week 14 fantasy football rankings and the top option in the Bales and CSURAM88 Models for DraftKings.

Watson does not have a good matchup. The Broncos have held quarterbacks to the fifth-fewest FanDuel points per game with 13.8.

But Watson is far too cheap on FanDuel, where he’s priced as the No. 9 quarterback despite ranking No. 2 with 22.8 points per game. Just last week, he had a slate-high 28.4 FanDuel points against a Patriots defense that has held quarterbacks to a league-low 11.2 points per game. Watson clearly can go off against any opponent.

In Week 12, Josh Allen — the quarterback most comparable to Watson in talent and style to face the Broncos — scored 20.0 FanDuel points against them. If Allen can put up 20, then Watson has the capacity for a GPP-winning performance.

As a passer, Watson is as steady as any quarterback with high-end marks of 8.4, 8.5 and 8.5 adjusted yards per attempt (AY/A) over the past three years, and this season, he’s No. 4 at the position with 5.2 carries and 0.9 red-zone carries per game (per Player Profiler).

No. 1 wide receiver DeAndre Hopkins has a tough matchup against cornerback Chris Harris Jr., who is likely to shadow him across the field. But with the field-stretching Will Fuller back from injury, Watson still has enormous upside.

In his 35 starts, Watson has exhibited stark Fuller-based splits.

Of any long-standing connection Watson has with a receiver, the Fuller connection has been the most productive, yielding an elite 11.9 AY/A (per RotoViz AY/A app). 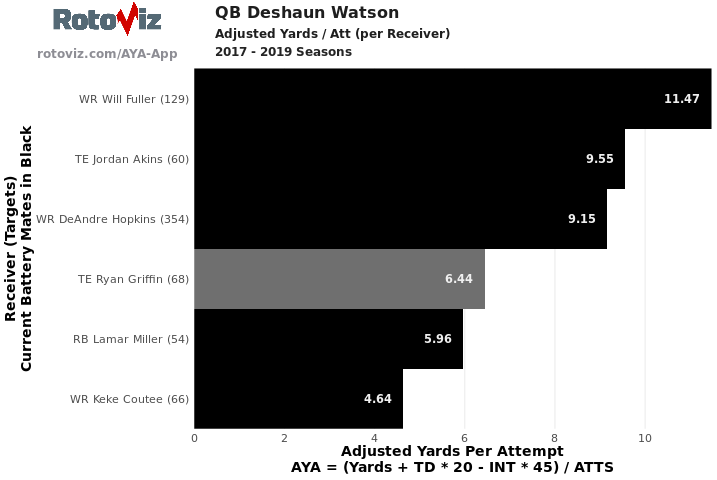 Team-specific production patterns can be analyzed with our FantasyLabs Correlations Tool, and in their nine games together over the past year, Watson and Fuller have had a strong 0.67 correlation in their production — the highest mark either of them shares with another player. If Watson has a big game, Fuller could go off as well. For GPPs, use our Lineup Builder to stack Watson with Fuller and his other receivers.

For both DraftKings and FanDuel, Watson has position-high ceiling projections in our Models.

Watson is the unanimous No. 1 quarterback in our Pro Models for FanDuel, where he leads all passers with a +5.13 Projected Plus/Minus. He also has a position-high five Pro Trends on DraftKings, where he’s the top option in the Koerner Model.

The last time Brady was at the top of one of our Models was Week 3, when the Pats were 20.5-point home favorites and Brady entered the matchup as the No. 4 fantasy quarterback, averaging 26.7 DraftKings points per game with 605 yards passing and six touchdowns in total.

Since then, Brady’s season has gone sidewise. Even though he is coming off a garbage-fueled 326-yard, three-touchdown performance, over the past 10 weeks, Brady has been the No. 26 fantasy quarterback with just 16.2 DraftKings points, 261.9 yards passing and 1.44 total touchdowns per game.

The Chiefs are No. 6 in pass defense DVOA. Brady doesn’t have a good matchup. And over the past five years, he has displayed a tendency to tail off in the second half of the season.

But Brady has a couple of factors in his favor.

First, he’s relatively cheap, priced as the No. 10 quarterback, and I doubt that Brady will be all that popular because of his recent struggles. But in half of his games this year, he has been a fantasy QB1. 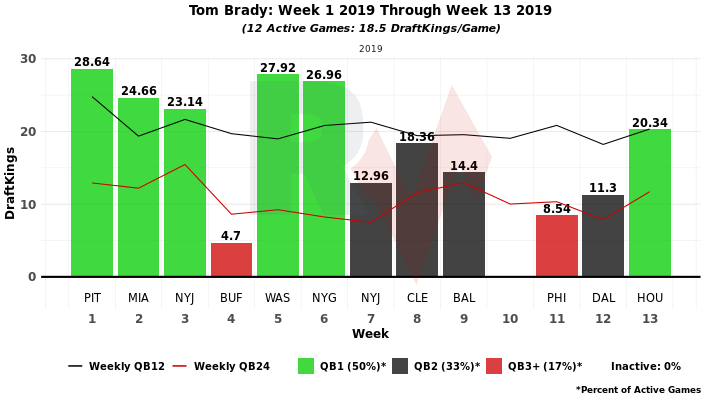 Granted, most of those performances came early in the year, but Brady still has that upside within his range of outcomes.

Also, he’s familiar with the Chiefs: He faced them twice last year and averaged 22.3 DraftKings points per game in those matchups. With how well the the Pats know the Chiefs, it’s not unthinkable that head coach Bill Belichick and offensive coordinator Josh McDaniels could basically game plan Brady to a high-end fantasy performance.

No quarterback has more than Brady’s five Pro Trends on DraftKings, where he’s the No. 1 option in the Freedman and SportsGeek Models.

What Darnold has going for him is the matchup: The Dolphins are No. 32 in pass defense DVOA.

In their nine games against quarterbacks who aren’t backups or haven’t been benched — in other words, against guys other than Case Keenum, Brian Hoyer and Mason Rudolph — the Dolphins have allowed 25.9 DraftKings points per game to the position with a +8.08 Plus/Minus and 88.9% Consistency Rating.

It’s hard to describe just how disfigured the Dolphins secondary is.

The Dolphins secondary, Week 1 to Week 14

The Dolphins are starting three third-stringers at corner: Webster is a seventh-round rookie cut by the Patriots right before the season and signed off waivers. Needham is an undrafted rookie who didn’t see any playing time till Week 6. Wiltz is an undrafted third-year practice squader finally getting a shot.

At safety, the Dolphins are using a converted corner who had never played the position till Week 6 and a third-year washout who wasn’t on the team till Week 12.

And I haven’t even mentioned the fact that the Dolphins are No. 32 in pass defense DVOA against running backs, and Darnold has one of the best pass-catching backs in the league in Le’Veon Bell.

In the words of Princess Leia: “You came in that thing? You’re braver than I thought.”

Even with his disappointing 239-yard showing last week, Darnold has averaged 19.8 DraftKings points per game over the past six weeks with three fantasy QB1 performances. Darnold had only 13.5 DraftKings points against the Dolphins in Week 9, so he’s probably not someone I’ll want to use in cash games, but he’s in play for tournaments.

Darnold is the No. 1 quarterback in the Raybon Model for DraftKings, where he has five Pro Trends and a respectable 77% Bargain Rating.

Carr is simply too cheap on DraftKings, where he has five Pro Trends and an elite 96% Bargain Rating. On a slate with 26 teams, he is priced as the No. 25 quarterback.

He’s somehow $900 cheaper than a guy who actually chooses to be called “Duck.” Nothing against Devlin Hodges, but in normal circumstances, the general public wouldn’t even know he exists.

Carr has clearly underperformed over the past two weeks. 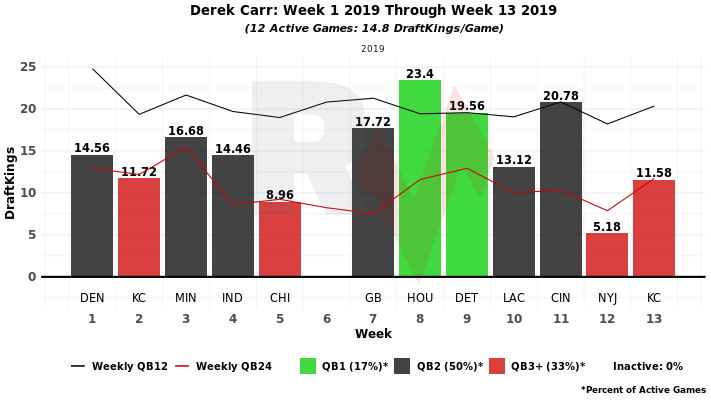 But in eight of his 12 games this year, Carr has been at least a fantasy QB2, and since the Week 6 bye, he’s averaged a palatable 15.9 DraftKings points per game.

Slot receiver Hunter Renfrow (ribs) exited Week 12 in the second half and missed Week 13 with an injury: He seems unlikely to play this weekend. It might not be a coincidence that Carr has recently underwhelmed without Renfrow, who is a steady middle-of-the-field presence.

But with No. 1 wide receiver Tyrell Williams and breakout tight end Darren Waller, Carr still has enough players around him to offer value. For the season, Carr has career-best marks with a 7.6 AY/A and 70.6% completion rate.

The Titans are not an imposing opponent: They have a pass funnel defense that ranks No. 4 against the run but No. 24 against the pass. No. 1 cornerback Malcolm Brown (Wrist, IR) is out, No. 2 corner Adoree’ Jackson (knee) exited Week 13 early and is uncertain for this week and backup corner LeShaun Sims (ankle) also missed last week.

Right now, the Titans are slated to start third-stringers Tye Smith and Kareem Orr as their perimeter corners: They are exploitable.

Carr is the No. 1 quarterback in the Levitan Model for DraftKings.

Kirk Cousins, Minnesota Vikings ($6,700 DK, $8,200 FD): The Vikings have a slate-high 28.25-point implied Vegas total, and the Lions have allowed an NFL-high 487.2 air yards and yards after the catch combined per game to opposing teams (per AirYards.com).

Jameis Winston, Tampa Bay Buccaneers ($6,400 DK, $7,700 FD): After a rough first couple of starts, Winston has been the No. 3 fantasy quarterback with 23.8 DraftKings points per game since Week 3, and he leads the slate with 10.3 intended air yards per attempt (per Next Gen Stats).

Jacoby Brissett, Indianapolis Colts ($6,100 DK, $7,400 FD): Wide receivers T.Y. Hilton (calf) and Parris Campbell (hand) are uncertain to play, but the Bucs are also dealing with injuries to cornerbacks M.J. Stewart (knee) and Jamel Dean (shoulder), and they have allowed the second-most DraftKings points per game to quarterbacks with 24.0.

Ryan Fitzpatrick, Miami Dolphins ($6,000 DK, $7,400 FD): FitzMagic has averaged 20.8 DraftKings points per game since returning to the starting lineup in Week 7, and the Jets have a funnel defense that ranks No. 2 against the run but No. 21 against the pass.

Devlin Hodges, Pittsburgh Steelers ($5,900 DK, $7,000 FD): Duck is technically an NFL quarterback, and the Cardinals have allowed an NFL-high 25.2 FanDuel points per game to the position.

Ryan Tannehill, Tennessee Titans ($5,800 DK, $7,300 FD): Since becoming the starter in Week 7, Tannehill has been the No. 4 fantasy quarterback with 23.1 DraftKings points per game, and the Raiders are No. 28 in pass defense DVOA.

Kyle Allen, Atlanta Falcons ($5,700 DK, $7,100 FD): Allen had no touchdowns and four interceptions against the Falcons in Week 11, but he did pass for 325 yards, and the Falcons have allowed the third-most DraftKings points per game to quarterbacks with 23.8.